This afternoon our Road to 270 series continues with the Yellowhammer State, Alabama.

STAUNCHLY SOCIALLY CONSERVATIVE, Alabama is another easy state to analyze on the road to 270. This is another southern state that used to be heavily Democratic, until Lyndon Johnson signed the Civil Rights Act and Alabama handed him a 69-point loss to Barry Goldwater that fall. In 1968, Alabama voted for home-state segregationist Governor George Wallace by 47 points. Except for the 13-point win it gave neighboring Southern governor Jimmy Carter in 1976, Alabama has been as reliably red as it gets at the presidential level since the sixties.

At the state level, however, both chambers of Alabama’s legislature are Democratic, while virtually all of the statewide executive offices are Republican. None of the major state executive races are up this year, so we’ll be revisiting the state in our 2010 previews. 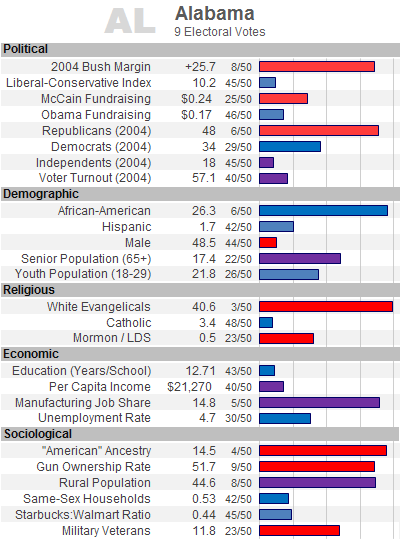 Alabama is one of the few states where fundraising per capita is better for McCain than Obama – that should tell much of the story. It’s our 6th-most conservative state on the Likert index and went for Bush by over 25 points in 2004. Nearly half the registered voters here report to exit pollsters they’re Republicans, despite Alabama not recording party affiliation.

Comparatively, Alabama is a high “American” ancestry state, a high gun ownership state, mostly rural, not very gay, not very Starbuckian. Religious factors that favor McCain are the high white evangelical population now thrilled with McCain’s running mate (3d most white evangelicals), and a the 3d-lowest Catholic percentage. Both sociologically and religiously, Alabama is an exact reversal of yesterday’s Massachusetts. While McCain was always going to win Alabama, the Palin religious conservative factor is extremely helpful in a state that went for Mike Huckabee during the primaries, enough to possibly affect downballot races that might have otherwise been tempered in evangelical turnout.

What’s good for the goose is good for the gander. The best thing Obama has going for him in Alabama is that it’s not worth 270 electoral votes – Alabama’s nine electoral votes are a virtual lock for McCain. Alabama is a culturally conservative state, and High African-American turnout in Alabama will help Obama, but only as far as the margin of defeat goes. Very high turnout in Montgomery, however, could affect a House race there (see below). Obama’s best ally is Rep. Artur Davis, the House member in AL-07 who might have his eye on the Governor’s mansion when that race begins in 2010. The very low fundraising total for Obama (only 17 cents per capita) betrays his weakness here.

The presidential race isn’t dramatic here, nor is the Jeff Sessions – Vivian Figures Senate race, a safe race for the incumbent Sessions. As with Wyoming, the only real potential action is in the House, where Democratic Montgomery mayor Bobby Bright faces Republican State Representative Jay Love for an open (Republican) seat in AL-02. Also, longtime Blue Dog Democrat Bud Cramer is retiring in AL-05 (top of the state), and Democrat Parker Griffith is the polling favorite to hold the seat blue against erstwhile Cramer-challenger Wayne Parker. We also recommend to watch for the annual War-Eagle v. Roll-Tide, Auburn-Alabama game.