Rick Perry’s campaign for the Republican presidential nomination is sputtering. It is running short on cash and is no longer paying its staff, according to reports from several news organizations.

But in a twist that was never attempted before this year, the campaign may be bailed out by Perry’s super PACs, which are flush.

How did Perry, the former governor of Texas, get into this position? The most basic answer is that his campaign hasn’t raised a lot of money — about $1 million so far this year.1 Among Republican candidates, that put Perry toward the bottom of the fundraising heap. And most of that money — close to 70 percent — came from donors who gave the maximum amount to the campaign and can’t give any more.

It’s not impossible for a campaign to survive at that fundraising pace if it budgets judiciously. Perry’s campaign, however, spent close to 60 percent of the money it brought in. That’s not an exorbitant “burn rate,” but it’s a level of spending that’s sustainable only if the campaign can continue to raise money — a tough task when relegated to the second tier of primary candidates in a field of 17.

But the campaign had to be aware that two super PACs supporting Perry have together raised close to $13 million.2 Officials of the super PACs said they would step in and pay for tasks the campaign itself could no longer afford, like a field operation in Iowa.

That used to be considered out of bounds. Super PACs and candidates’ official committees aren’t allowed to coordinate with one another, according to Federal Election Commission rules. But in this election cycle, campaigns and super PACs have decided to stretch those rules, aware that there will be little government enforcement.

The numbers show how much Perry has relied on his super PACs. Ninety-two percent of the money raised on his behalf has gone to his super PACs, the most of any primary candidate.3 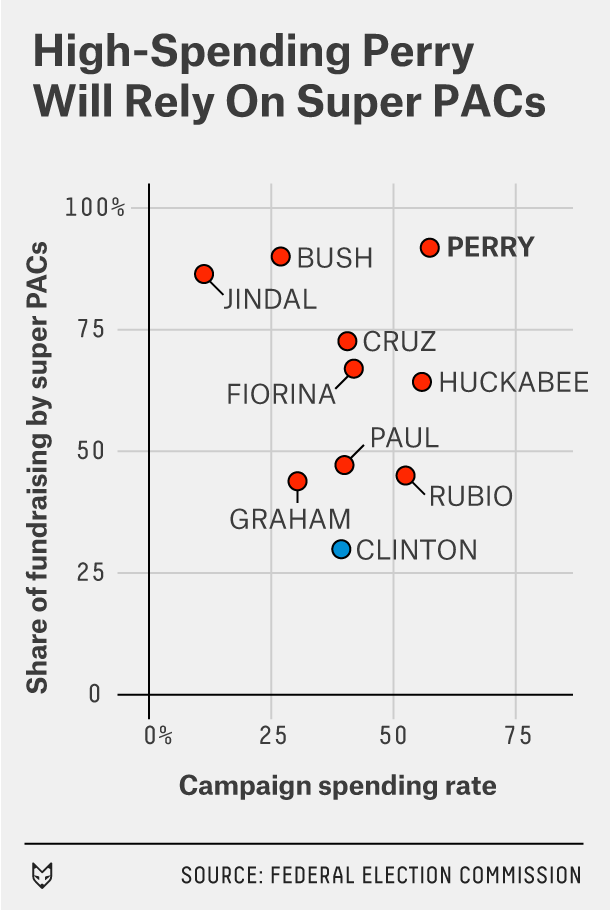 In this chart, I’ve plotted each campaign’s burn rate against the percentage of total fundraising by the super PACs supporting him or her.4

In Perry’s case, the large fundraising haul by the outside groups supporting him was no secret, and may have given the campaign some sense of security. Now it may be up to those groups to save his campaign.

Aaron Bycoffe is a computational journalist for FiveThirtyEight. @bycoffe