Last fall, Democrat Terry McAuliffe defied the odds and beat Republican Ken Cuccinelli in Virginia’s gubernatorial race. Democrats, already suffering from President Obama’s flagging approval rating and ominous Senate prospects, began hoping they could tune out other failures and use their strategy in that swing-state race as a template to win tough races in 2014.

To hear several Democratic operatives tell it, the McAuliffe campaign’s technological wizardry “cracked the code” by producing an electorate a lot like 2012’s and proved that those notoriously unreliable “casual Obama voters” — disproportionately young, urban and non-white — could indeed be cajoled to the polls in non-presidential years like 2014.

But drill down on exit poll and precinct-level data, and you’ll find that’s only half the story. McAuliffe’s campaign was indeed quite successful at turning out many voters in the so-called Rising American Electorate who had failed to show up in 2009, the previous gubernatorial election year. But without the polarizing Cuccinelli’s woeful under-performance in wealthier and whiter precincts, McAuliffe likely would have fallen short. It’s not shocking that Cuccinelli, who investigated UVA climate scientists and held a rally with professional right-wing provocateur Mark Levin weeks before the election, alienated Virginia’s upper crust.

In other words, Virginia’s Super Zips were a false oasis. The rest of the country has far fewer such areas, and Democrats don’t have the luxury of running against Ken Cuccinelli in most races. Democrats can’t hope to copy Virginia and enjoy similar success elsewhere in 2014.

Until 2013, the white-collar inhabitants of Virginia’s wealthiest enclaves were a dependably GOP bunch. In 2009, voters making over $100,000 a year were 32 percent of Virginia’s electorate and voted for Republican gubernatorial candidate Bob McDonnell 58 percent to 42 percent. In 2012, they were 34 percent of all voters and voted for Republican presidential candidate Mitt Romney 51 percent to 47 percent.

In 2013, these wealthy voters ballooned to an astounding 40 percent of the electorate — and they abandoned the Republican candidate, Cuccinelli, voting for McAuliffe 49 percent to 43 percent.

Granular-level data from several of Virginia’s top Super Zips backs up the exit polls. Even though Cuccinelli actually won a higher share of votes than Romney did statewide, he badly under-performed Romney in the wealthiest precincts. The table below shows Republicans’ two-party vote share1 in selected Super Zips from 2009 to 2013. 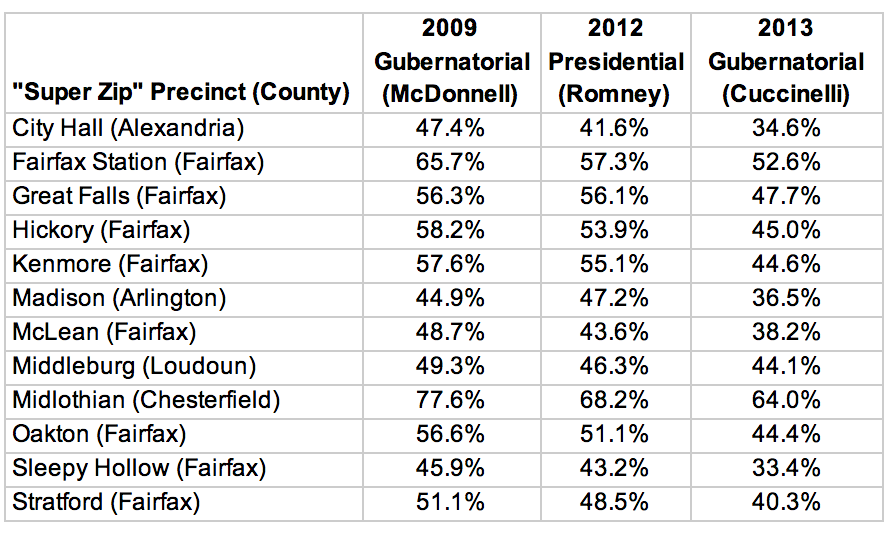 The problem for Democrats in 2014? Very few competitive House and Senate races will take place in states and districts where voters making more than $100,000 comprise anywhere near two-fifths of the electorate. And, unlike McAuliffe, other Democrats running in 2014 can’t expect to be saved by a GOP rival who clashes with the country club.

For Democrats, the real concern for 2014 isn’t Super Zips, but instead the lower-income demographic melting pots that turn out strongly and give Democrats more than 70 percent of the vote in presidential years, but seem to fall asleep in off-year elections.

McAuliffe put enormous effort into waking up these districts. He outraised Cuccinelli $37.8 million to $21.3 million and spent much of that money building an unprecedented and elaborate get-out-the-vote machine to turn out lower-income minorities and millennials. (The Washington Post’s Reid Wilson documented the McAuliffe campaign’s relentless full-court press to woo hard-to-reach voters through social media and laser-focused contact in this excellent piece.)

The effort paid off — to a point. The happy result for Democrats was a vast improvement over 2009 turnout in Virginia: The 2013 electorate was 28 percent non-white and 13 percent below age 30, compared to 22 percent and 10 percent, respectively, in 2009. But overall, voters who came out in 2013 were still measurably older, whiter and wealthier than those who showed up in 2012, and probably wouldn’t have elected McAuliffe had he faced a “normal” Republican like Bob McDonnell (circa 2009), Lt. Gov. Bill Bolling or even Mitt Romney.

The same dynamic explains why Republicans were able to hold Florida’s 13th congressional district in a special election last month with a relatively weak nominee, even though Obama had carried the district narrowly in 2012.

In 2014, House and Senate Democrats won’t be measured against 2009. They’ll be measured against how they did the last time their offices were up for election, in 2008 (Senate) and 2012 (House) — both presidential cycles. And the hard truth for Democrats, as evidenced by Virginia, is that not even a $16 million spending advantage, a world-class turnout operation and a deeply polarizing GOP nominee can make up for the absence of President Obama on the ballot.

For proof of Democrats’ problems in more diverse, lower-income districts look no further than exurban Prince William County, a booming commuter “melting pot” in the outskirts of Northern Virginia that is, upon close inspection, fairly racially segregated. Just over half (40) of Prince William’s 77 voting precincts are majority minority, while 37 precincts are majority white. Their voting patterns are startlingly divergent.

Because Libertarian Robert Sarvis took votes away from both major candidates in the governor’s race, it’s helpful to use the 2013 attorney general’s race as a point of comparison in a turnout analysis, rather than the 2013 gubernatorial tallies. In that race, Mark Herring was the Democratic candidate, running against Republican Mark Obenshain. The table below shows that Democrats saw a drop-off in votes from 2012 to 2013 in Prince William County.

Of course, this Democratic drop-off was even more severe in 2009, after Obama’s first campaign. But McAuliffe won the governor’s race in 2013 not because he got every “casual Obama voter” to the polls, but because he was able to encourage just enough of them to show up. That’s a huge distinction.

McAuliffe’s top-of-the-ticket win also belied Democratic down-ballot failures that portend problems for House Democrats this fall. Even with a turnout lift from McAuliffe, Democrats picked up just a single seat in the Virginia House of Delegates, far short of expectations. Incredibly, Republican incumbents held onto 14 of 16 seats in districts Obama won in 2012, an especially ominous warning for Democrats looking at the 17 U.S. House Republicans nationwide who are up for reelection in districts the president won two years ago. The chart below shows the Democratic drop-off in those 16 Virginia House districts from 2012 to 2013. 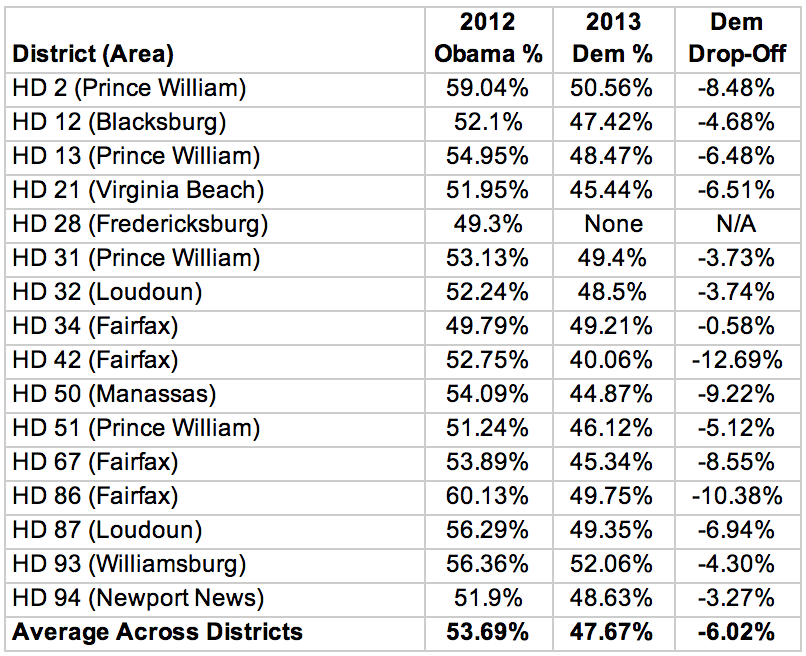 Out of the 16 Republican-held Virginia delegate seats in districts carried by Obama in 2012, Democrats picked off just two and ran behind Obama’s share in all of them. In fact, Democratic candidates ran behind Obama by an average of six points in these districts, corroborating RealClearPolitics analyst Sean Trende’s finding that “Democrats have been running three to five points behind Obama’s 2012 showing with surprising consistency” since 2012.

So if Democrats can only hope to mitigate their turnout problems in 2014, how and where can they offset them?

Super Zips are a reasonable place to start. It’s there that Republicans’ refusal to accept changing attitudes on social issues have cost the GOP the most support. If House Democrats wanted to carbon-copy McAuliffe’s Virginia strategy, they could start by identifying how many vulnerable House Republicans sit in Super Zip districts.

Of the 50 highest-income districts in the country — home to the lion’s share of Super Zips — Democrats already hold 28. But in the 22 remaining districts, there isn’t much hope for turnover in 2014.

Although most of these districts are fairly competitive territory (only four are more than eight points more Republican than the national average, according to Cook Political Report PVI scores), 19 are in the Cook Report’s Solid Republican column, and Republicans won all of them with more than 54 percent of the vote in the pro-Democratic year of 2012.

Of these 22 Republican seats, Democrats’ best opportunity may be in Virginia’s 10th congressional district, the wealthiest district in the country, where popular GOP Rep. Frank Wolf is retiring. But even in that open-seat race, Republicans have the upper hand. Elsewhere, in cases where GOP incumbents are running for re-election, they’re nearly untouchable. 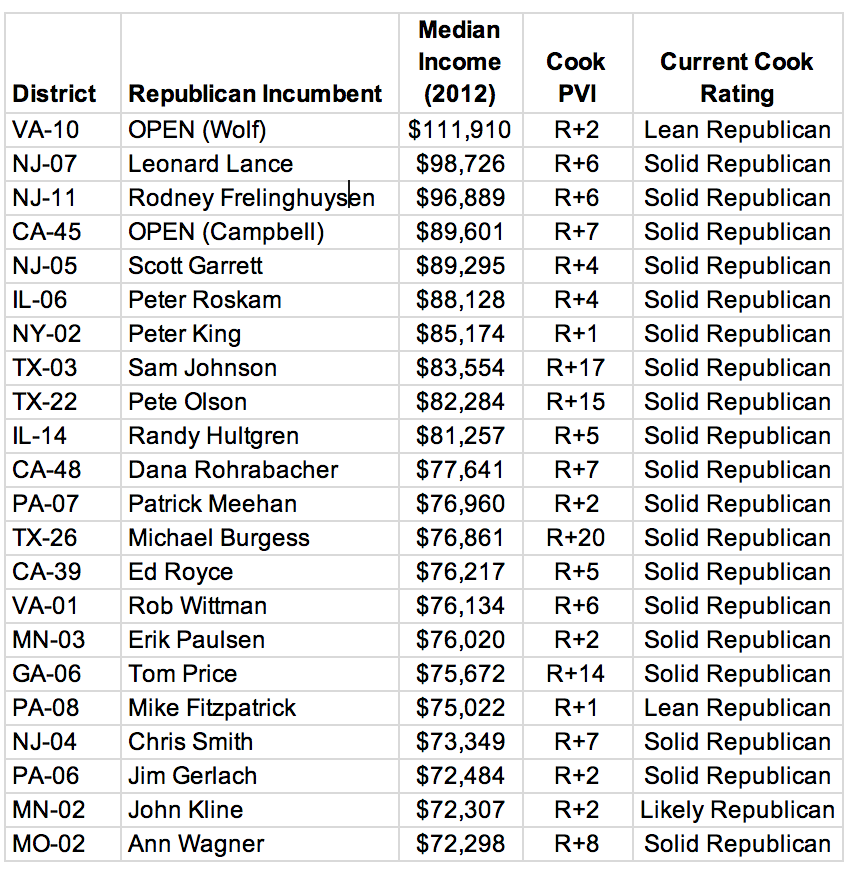 Why are they so secure? For the most part, these Super Zip Republicans are pro-business members who de-emphasize wedge social issues and biographically fit their districts well. In other words, there are no Ken Cuccinellis in this elite batch of candidates — and that’s just one reason House Democrats need something major to change if they want to win any seats whatsoever in 2014.