Although I tread gingerly on the turf of 538’s own Andrew Gelman, who wrote the authoritative treatment on the relationship between economic status and partisan voting behavior, the release this week of Forbes’ list of the 25 richest counties made me curious how much the partisanship has changed in these counties from the end of the Reagan era to the start of the Obama era.

Of course, the 25 wealthiest counties today—measured in terms of median household income—are not identical to the 25 at the time of the 1990 Census. Maryland and Virginia together now claim 11 of the top 25 combined (up from 7), including six of the top 10; since 1990, Alaska, New Jersey and New York lost 7 total counties from the list.* 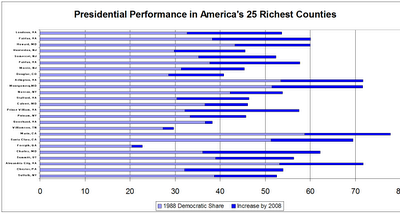 Comparing the presidential voting results 20 years apart, there are some interesting differences and patterns. First, all of the counties voted more Democratic in 2008 than in 1988. Democrat Barack Obama won 16 of the 25, while Democrat Michael Dukakis carried just 5 of the (current) 25 richest.

Second, because there is about a 14-point swing between George HW Bush’s 7-point 1988 victory and Obama’s 7-point victory two decades later, a more revealing barometer is how many of the 25 counties swung by 14 or more points. Answer: 20 of them. That is, they aren’t just bluer than they were 20 years ago; they have outpaced the national shift toward the Democrats, at least between those two elections.

Third, in general the bluer these counties started out 20 years the bigger the Democratic gain. That adds yet further confirmation that we are increasingly a nation of people who self-segregrate in ways that make partisanship more geographically homogeneous. In 2000, 36 percent of counties voted at least 60 percent for either George W. Bush or Al Gore; by 2004, that figure had jumped to 44 percent. (I can’t seem to find the figure for 2008.)**

As for all of those Maryland and Virginia counties, well, their presence is obviously attributable in part to the concentration of federal employees, consultants and contractors in the area. (Maybe this is what Americans are complaining about when they say they think half of all spending is “wasted”?) They are also rich counties in rich states, as are most of the 25. Income differences do affect partisan voting patterns in rich states, but as Gelman demonstrates very early on Red State, Blue State, Rich State, Poor State, income matters even more in the poorer states.

One final note about all those rich counties in and around DC: Their location in or proximity to Maryland may make it easier for former Gov. Bob Ehrlich to pull together sufficient funding for a last-minute run against incumbent Democrat Martin O’Malley. The University of Maryland’s Center for American Politics and Citizenship has a neat little report discussing the fundraising patterns of both men four years ago; in it, among other findings, CAPC chronicles the rapidly growing fundraising totals in MD gubernatorial races over the past two decades. The report also notes that the rich DC-area counties contributed significant sums to both Ehrlich and O’Malley.

Rich counties and rich states may be bluer at the ballot box, but the money they pour into races for either Republicans or Democrats is still green.

*N.B.: The two Fairfax entries is not an error: The first is Fairfax County; the second the independent city (Virginia has them all over the state) of Fairfax.

**Correction: I misstated that statistic. It should say that 44 percent of voters lived in counties that went 60 percent for either Kerry or Bush in 2004, not 44 percent of the counties. (Obviously, not all counties have the same population.) My friend, colleague and sometimes co-author Phil Klinkner of Hamilton College was kind enough to correct me on this point, and also to give me the stat for 2008: 49 percent of voters lived in counties that voted 60 percent or more for either Obama or McCain. So the trend continues.