We continue our Presidential Geography series, a one-by-one examination of each state’s political landscape and how it’s changing. Here is Rhode Island, the Ocean State. FiveThirtyEight spoke with Scott MacKay, a political analyst for Rhode Island Public Radio; and Maureen Moakley, a professor of political science at the University of Rhode Island. 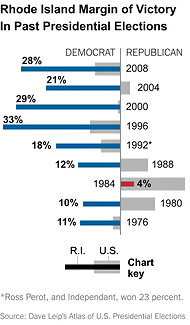 In the Rhode Island State Legislature, “there are so few Republicans they barely give them parking spaces,” Ms. Moakley said.

Indeed, Rhode Island is among the most Democratic-leaning states. It ranks as the fourth bluest state in the nation in the FiveThirtyEight Presidential Voting Index, and Democrats have more than a 3-to-1 edge in voter registration, an overwhelming advantage.

Yet Rhode Island has not elected a Democratic governor since 1992. And one of its two United States senators was a Republican from 1976 to 2007: John Chafee, then his son Lincoln Chafee. The younger Mr. Chafee, now an independent, was elected governor in 2010.

What allows for such disparate results? Elasticity. Rhode Island is the most elastic state, a large swatch of its electorate are persuadable voters unaligned with either political party. Rhode Island has very few Republicans (10 percent of registered voters), a ton of Democrats (41 percent), but even more unaffiliated voters (49 percent).

Rhode Island has a lot of swing voters, partly because the state’s main demographic groups do not correlate strongly with either political party. Democrats have a solid base in the state’s Hispanic population (13 percent) and black population (7 percent). But outside of those communities voters do not fit perfectly into either major party. Many Democrats are former Rockefeller Republicans, and many Republicans are Reagan Democrats. Party affiliation is a weak bond for many Rhode Island voters.

Rhode Island is the only majority Catholic state (52 percent) in the nation, according to Gallup (Massachusetts comes close). And unlike evangelical Christians and Mormons (who lean heavily Republican) or Jews (who lean Democratic), Catholic voters are split roughly down the middle. White Catholics lean slightly Republican, but Hispanic Catholics skew Democratic. 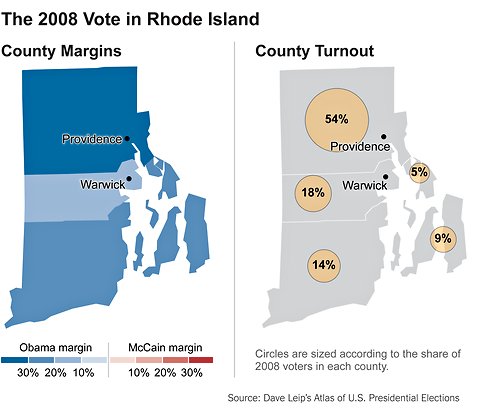 Providence is overwhelmingly Democratic, with mostly white, highly educated and affluent liberals around Brown University, a large Jewish community and more working-class and diverse Democrats in the city’s black and Latino populations.

Northern Rhode Island, around Woonsocket, is socially conservative but more supportive of an activist government on issues like Social Security, Mr. Mackay said. This is Reagan Democrat territory.

Conversely, in southern Rhode Island in Washington County, socially moderate, highly educated and wealthy voters live along the water in towns like Westerly and Charlestown. This is a region dominated by Rockefeller Republicans, the old base of the Republican Party in New England, who now vote for Democrats.

Between the two, Kent County, anchored by Warwick, is mostly suburban, relatively affluent and one of Rhode Island’s more competitive counties. This was the only county in Rhode Island where Senator John McCain carried more than 40 percent of the vote in 2008. 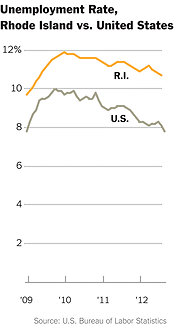 Look to Bristol County for an early clue as to how Rhode Island will vote. It includes remnants of the state’s traditional economic drivers in Bristol and Warren, like fishing and manufacturing. But there’s also manifestations of a new knowledge-based economy in wealthy, suburban towns like Barrington, Mr. Mackay said. And over all, Bristol County is becoming more affluent and gentrified, Ms. Moakley said.

Bristol County was a few percentage points more Republican leaning than the state in the 2000 presidential election, but it matched the two-party vote shares in Rhode Island almost perfectly in 2004 and 2008.

Mr. Obama is a 100 percent favorite to carry Rhode Island, according to the current FiveThirtyEight forecast, and all signs point to it remaining reliably Democratic-leaning in presidential elections.

This dynamic has been apparent in this year’s race for Rhode Island First Congressional District. Brenden Doherty, a Republican, was running as a moderate and seemed to be leading the incumbent, Representative David Cicilline, a Democrat. But as the presidential race kicked into full gear, Ms. Moakley said, Mr. Cicilline was able to tie Mr. Doherty with Mr. Romney and the national Republican Party. The latest polls show Mr. Cicilline in front.

Mr. Doherty could still win, of course, but the national Republican brand is a millstone for Rhode Island Republicans, making it harder for them to gain office.

Rhode Island still has socially moderate, fiscally conservative voters. It just doesn’t have a partisan home for them.

So while the odds are against state Republicans ascending to power, there could be “an increasing move toward independent candidates,” Ms. Moakley said.

“Because,” she added, “there’s so many people with no place to go.”