Our continuously-updated list of Tipping Point States — recently represented with a snazzy new map — tells you which states are most likely to determine the outcome of this year’s election. As described in the FAQ:

Naturally, Tipping Point States are usually going to be those associated with large electoral vote counts. It’s much more likely that a state like Pennsylvania, which has 21 electoral votes, will make the difference between winning and losing the election than something like Montana, which has 3. The goal of the Tipping Point States metric is to balance which states are closest to the median of the electorate with the value of each state in the Electoral College — and it generally comes up with pretty intuitive results.

However, it is not necessarily the case that the states with the highest Tipping Point number will represent the best return on investment for the candidate. While Pennsylvania is more likely to swing the election than Montana, it is also many times more expensive. Of course, a campaign will still want to invest more in Pennsylvania than it does in Montana in the aggregate. But which state is better on a dollar-per-dollar basis?

To get at this, what we can do is divide a state’s Tipping Point percentage by its population (more specifically, it’s eligible voter population). What this implicitly assumes is that the expense of competing in a state is proportional to its eligible voter population. Strictly speaking, this is not true, especially when it comes to television buys, where there are a lot of idiosyncrasies related to the geography of different TV markets (something I’ll be writing more about in the near future). But it’s a reasonably safe and neutral assumption for our purposes here.

This calculation produces a ratio, whose value is meaningless in the abstract, but which can be compared to the ratio in the country as a whole (in other words, we’re taking the ratio of the ratios). The ratio figures, for instance, that a dollar spent in Pennsylvania is about 3.5 times more likely to influence the outcome of the election than one spent in the nation as a whole. This is what we call the “Return on Investment Index”. Which states have the highest ROIs? 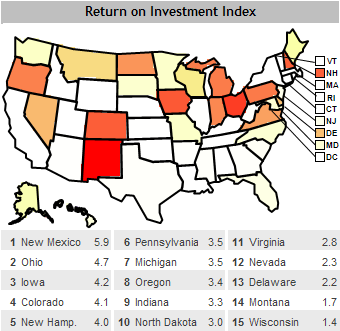 The top state is New Mexico, which produces an ROI almost 6 times higher than the nation at large. Why New Mexico? We project it to be very close to the median of the electorate. Right now, we are predicting a 2.7-point victory for Barack Obama in New Mexico, versus a 3.7-point victory in the national popular vote. Strictly speaking, the states that deserve the most attention are not those that are closest at any given moment, but rather those that are closest to the national average. If, say, Barack Obama has built a 12-point lead in August, you will probably start to see some weird things like Mississippi being a toss-up. But that doesn’t mean the Obama campaign should at that point begin to invest heavily in Mississippi, because the only time the decision to invest in an individual state matters is when the election is close. If that hypothetical 12-point lead in August reverted back to a 1-point lead in October — the only contingency that matters, it is very likely that Mississippi would no longer be one of the closer states. Likewise, even though Obama has a “safe” lead in Pennsylvania now, he cannot stop campaigning there (nor can McCain), because if the election tightens, Pennsylvania is liable to be within a couple of points.

Overall, the map suggests a slightly more defensive-minded resource allocation strategy than the one that the Obama campaign is employing currently. It doesn’t look like states like Oregon and Iowa are going to be all that close now, for instance, but it also doesn’t look like the election is going to be all that close; if the polls tighten, they may be vulnerable. At the same time, the calculation validates the Obama campaign’s decision to put resources into states like North Dakota (which ranks 10th by this metric), Montana (14th) and Alaska (17th). By contrast, Florida ranks just 25th. It’s running about 6 points behind Obama’s national averages, and it’s extremely expensive to compete in.