The announcement on Tuesday by Senator Tim Johnson, Democrat of South Dakota, that he will not run for re-election in 2014 brings the total number of senators who have retired or resigned in the 113th Congress to eight.

While eight retirements is not a record, the 113th Congress is the third consecutive legislative session to experience an unusually high number of Senate retirements. Those retirements have combined with defeats at the ballot box to create the largest turnover in the Senate in nearly 40 years.

Since the 1972 congressional elections, which is as far back as our database of retirements goes, the Senate has typically seen about six retirements in each Congress. Beginning in 2009, however, senators have been leaving at a significantly higher rate. Before the eight retirements — so far — in this legislative session, there were 10 in the 112th Congress and eight in the 111th. 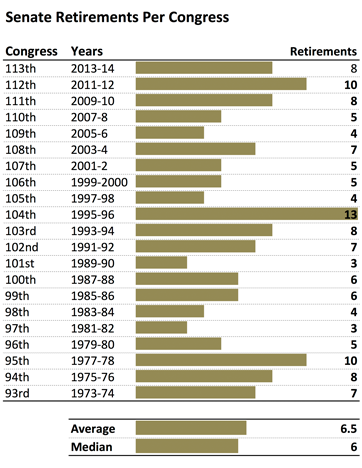 In total, 26 senators have retired since January 2009. That is just two retirements short of the recent peak, from 1991 through 1996, when 28 senators retired. And there is plenty of time left in the 113th Congress for more retirements to come.

But retirements don’t tell the whole story of turnover. Though the 1990s still holds the edge in the number of retirements, the past few election cycles have brought in more Senate freshmen than that era did.

“This is the largest number of turnovers since the 1970s,” Dr. Donald A. Ritchie, the Senate historian, said. 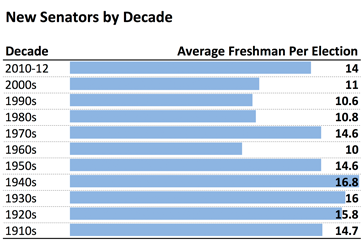 Senate.gov has data on freshmen senators going back to 1914, the first election after the Seventeenth Amendment established direct election of United States senators by popular vote. The number of new freshmen senators elected to each Congress was generally lower in the second half of the 20th century than it was in the first half. The average number of new senators per Congress in each decade ranged from 15 to 17 from 1914 through 1940, but it then fell to 10 or 11 through the first decade of the 21st century.

The current period — beginning with the 2008 elections — have seen a similar, though slightly smaller, jump in new senators. Fourteen freshmen were elected to the Senate in 2008, followed by 16 newcomers in 2010 and 12 in 2012.

In part, the current turnover is a generational shift. “People who came [to Washington] in the late 1970s and early 1980s — the last major turnover — are now leaving themselves,” Dr. Ritchie said. “Every 20 or 30 years, there’s just a large crop of people who come in at the same time and so they also tend to leave at the same time.”

Some also argue that more senators are retiring because, as David Karol, an associate professor in American Politics at the University of Maryland, said, “Post-Congress is a lot more lucrative then it used to be.” Legislators can make a lot more money in the private sector or lobbying their former colleagues.

Finally, some contend that increased partisanship has made the Senate less hospitable. When Senator Olympia Snowe of Maine retired last year, she pointed to “political paralysis” as the main reason.

Whatever the cause, the eight retirements so far in the 113th Congress mean that we should continue to see more turnover into the 2014 elections.