Ten years after Hurricane Katrina, the city of New Orleans is still debating the merits of Louisiana’s experimental overhaul of its flooded schools. But research released this month signals that student outcomes in the city have improved and that the reforms are responsible.

Before Katrina, New Orleans had a traditional public school system. At the time of the August 2005 flood, that district was the second-worst-performing district in the second-worst-performing state. Now, it’s the country’s first free-market education system. Whether New Orleans’s radical reforms have worked matters not only for students there, but also for kids in classrooms around the country where similar models are being applied.

In November 2005, the Louisiana State Legislature voted to allow the state-run Recovery School District, which had been created to take over failing schools across Louisiana, to take control of 102 of 117 schools in the city (on top of the five it already controlled). Under pressure to reopen schools as quickly as possible, the Orleans Parish School Board fired all the public school employees, and the board and the Recovery School District turned the schools over to organizations to run as charters. According to the Cowen Institute at Tulane University, 93 percent of New Orleans public school students attended charter schools in the 2014-15 school year — the highest proportion in the country.

With the influx of charter schools came a suite of other reforms, including greater school autonomy, open enrollment, reliance on nonprofits such as Teach for America to provide training and staff, and accountability measures that allowed the state to close underperforming schools. By the available metrics, these reforms have been a success. But it’s difficult to assess other consequences — like community engagement and trust in the process — that are less quantifiable.

Supporters of the reforms have pointed to improved student test scores and graduation rates as an indication that the overhaul was a success. As Jonathan Chait of New York magazine wrote Monday, the reforms “have produced spectacular results.” Meanwhile, critics have pointed to the lack of transparency in that data, saying it’s unclear whether these measures are accurate, or whether the improvement can be tied wholly to the reforms.

The latest research, conducted by the Education Research Alliance for New Orleans, an organization within Tulane, aimed to find out how significant the improvement in test scores and graduation rates has really been, and to understand what has caused it.

Douglas Harris, the organization’s director and the lead author of the report, said any number of factors after the flood could have affected student outcomes.

First, New Orleans shut down the city’s largest sources of public housing after Katrina, meaning students from higher-income families returned to the city and to school while others didn’t. That change in the makeup of the student population alone would affect scores, but Harris also noted that the schools students attended elsewhere before returning to New Orleans could have had a significant impact on their learning. On the other hand, many of those returning students, Harris said, “came back to a city that was like a third-world country for years afterward,” an environment that could have had an adverse effect on student outcomes.

The reforms also allowed the state to close schools that weren’t up to par according to Louisiana’s School Performance Scores, which are calculated using student test scores, credits and graduation rates. “Whenever you have a system focused on particular measures and the threat of closing down schools, you have to be worried that someone, somewhere, may be affecting the measures in a way that’s not reflecting actual improvement,” Harris said.

Reform supporters used to point to a general upward trend in student outcomes, but there was no way to show that the reforms specifically were responsible. “Now we’ve spent the past year, year and a half, really parsing the outcomes, and I think the case is much more convincing,” Harris said.

Using other school districts in Louisiana that were affected by Hurricane Katrina as a control group, the report, published in Education Next, found that New Orleans students’ performance increased significantly relative to their counterparts.1 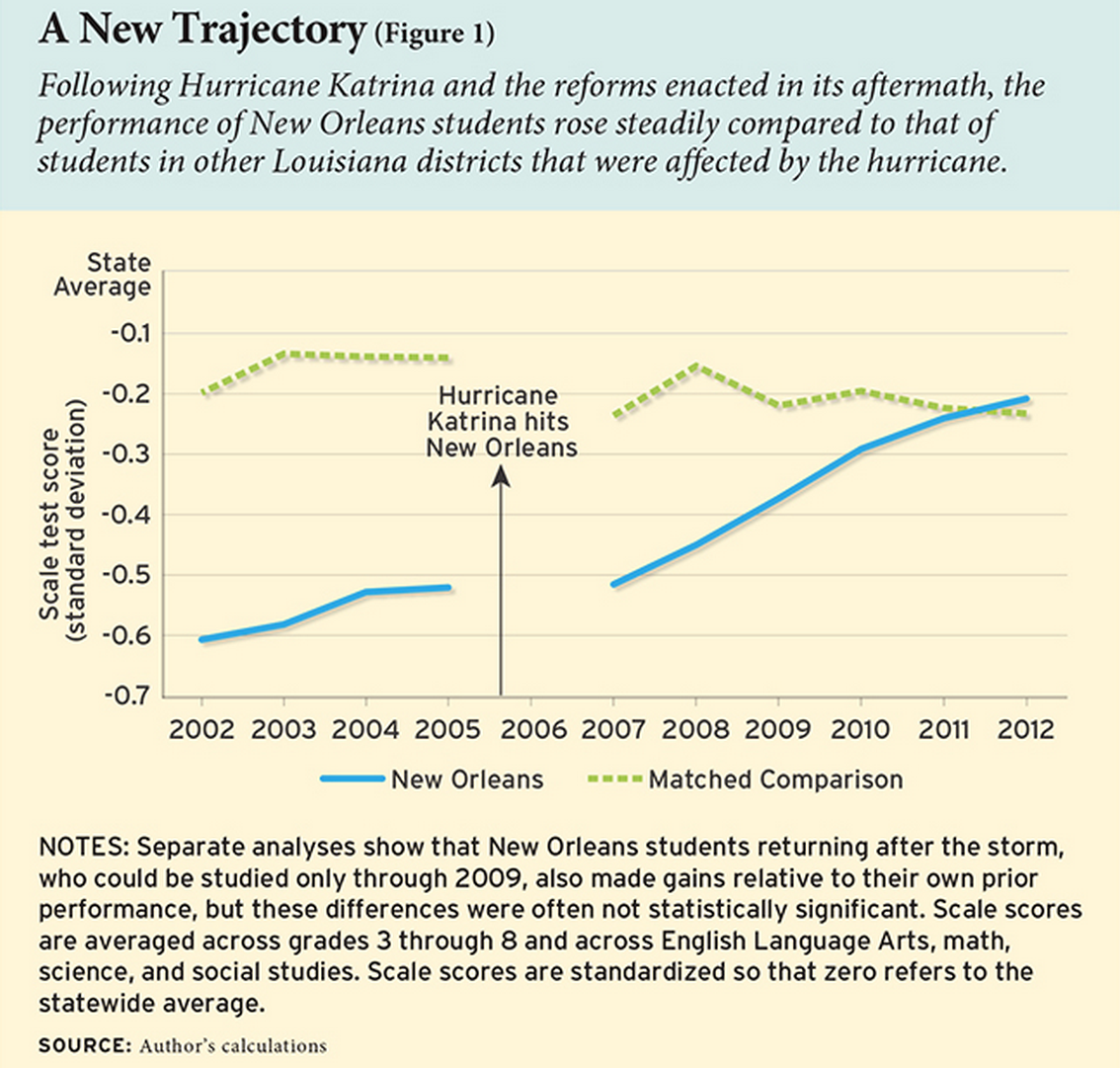 None of this is to say that the system is perfect — despite progress, there have been blunders. The district has addressed parents and critics’ concerns about a lack of adequate resources for special education, an opaque disciplinary process and no cohesive districtwide application process.

Yet despite the system’s failures, its ability to correct itself has been noteworthy. Christine Campbell, senior research analyst and policy director at the University of Washington Bothell’s Center on Reinventing Public Education, has studied the New Orleans model and how it’s being implemented in other districts around the country. She said this adaptability is important to consider in gauging the system’s success.

“They’ve been really responsive to both positive and negative trends,” she said. “They put the power in the hands of educators in such a dramatic way” that it became a lot easier to implement solutions quickly. She gave as an example the district’s response to a 2010 lawsuit alleging that it was denying access to students with disabilities. The school system created a fund for special education and worked with nonprofit groups to provide grants to schools that improved their special education graduation rates. “Within a year, not only had they tackled the problem, but they innovated in a way that other places can learn from,” Campbell said.

But some problems are more difficult to tackle. The mass firings of teachers that kicked off the reforms didn’t sit well with the community, and critics say there wasn’t enough input from parents and students in the system overhaul.

One critic is Adrienne Dixson, an associate professor of education at the University of Illinois at Urbana-Champaign who taught in New Orleans in the ’90s and whose children went through the school system. She tends to push back against any praise of the changes, citing the lack of community engagement. “How are we counting success? I attend board meetings and community events, and I know that people feel alienated and don’t feel a part of the process. I wouldn’t count that as success,” she said. “I would say that success is an engaged public.”

Campbell measures the implementation of districts’ reforms across seven variables of school district success. She said her team initially considered only six, but they added a metric for “engagement” after seeing the backlash from the community the reforms in New Orleans caused.

“We realized that when you sit down at a school that’s been failing for 20 years, you don’t get a lot of kudos for turning it around when you missed educating the community,” she said. “What you really need to do is tell them what’s going on, give them the options, and let them drive that demand for something better.”

While the research from the Education Research Alliance provides some answers, it won’t solve the debate over the success of New Orleans school reform. “There was fallout from the reforms in terms of community engagement, but 10 years out and the community still isn’t exactly sure what’s the right way to go from here,” Campbell said. “There’s work underway, but there’s no easy answer.”

CORRECTION (Aug. 25, 9:55 a.m.): An earlier version of this article incorrectly attributed the firing of New Orleans public school employees to the Recovery School District. The Orleans Parish School Board fired the employees, and the board and the district turned the schools over to charter organizations.