On the front page of Politico this morning, a message of warning to congressional Republicans: 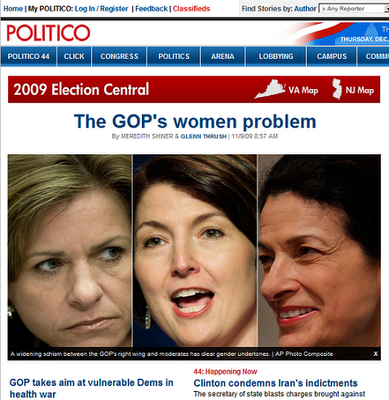 The gist of the article was as follows — as the Republican party has pushed out moderates, it has tended to appear more hostile to women candidates and congresswomen. Debbie Wasserman Schultz (D-FL) was quoted as saying that the GOP “is a party that doesn’t respect women, a party that doesn’t believe women are equal to men,” while former Republican conference chair Deborah Pryce bemoaned the loss of moderates in general — many, she maintained, being women.

The article cites the major difference in proportion between Republican and Democratic women, with women making up nearly 23 percent of the Democratic caucus in the House of Representatives, while less than ten percent of Republican congresspeople are women. In the U.S. Senate, the proportions are just about the same. 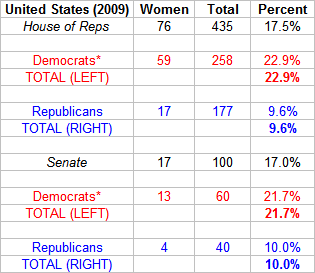 However, truth be told, the problem identified in the Politico article is quite a bit broader than simply the GOP’s turn to the right in recent years. 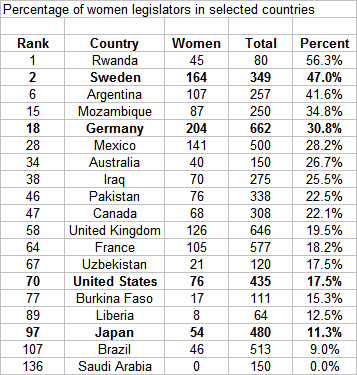 The US trails behind OECD allies other than Japan and Turkey, often by a significant margin.

However, when we compare the Republican Party with other conservative parties and coalitions in the OECD DAC (wealthiest democracies in Europe, North America and Japan) — the case studies are bolded above — there is a fascinating result.

Let’s start with Sweden, the highest OECD country on the list.

Both the governing centre-right coalition in Sweden, led by the Moderate party, and the left side of Sweden’s political spectrum have extremely high representation by women in the Parliament. The range is fairly high, with the farthest left party (“the Left”) having more women than men, while the conservative Centre party has just 38 percent women. 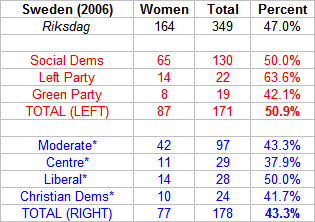 In Germany’s Bundestag (using 2005 data, since current data on gender and party was hard to come by), again the break between left and right is quite significant, with a 17 point gap separating the two coalitions, though at this time the government was run by a grand coalition between the SPD and CDU/CSU. 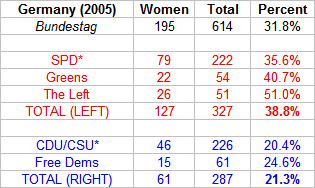 Japan’s Diet reflects the recent strength of the Democratic Party of Japan, which just months ago thrashed the traditionally powerful Liberal Democratic Party. The rather low percentages of women in both camps reflect Japan’s low position on the global chart — 97th overall. 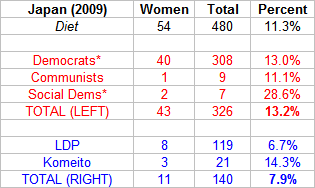 In order to compare apples to apples in this analysis, the real question is how a party fares within its own political system, as compared to other parties within their systems. So, for example, comparing U.S. Republicans to the Swedish Liberal Party or the Moderates would tell us more about the difference between Sweden and the U.S. rather than how close each party is to the center of their electorate.

Comparing U.S. Republicans to U.S. Democrats, it turns out that Republicans (the right of the U.S. in this model) are by far the lowest in terms of proportional representation of women legislators within their political system, as compared to other conservative parties and coalitions

In other words, as a proportion of the Democrat’s percentage, the Republican Party has the lowest percentage of women legislators, as compared to the shares of the conservatives in the other three countries. In fact, as the percentage of women parliamentarians in Germany rose in the 2009 election (from 31.8 percent to 32.8 percent, with 9 new women) in an election with a victory from the center-right, the gap is likely even larger than this chart suggests. 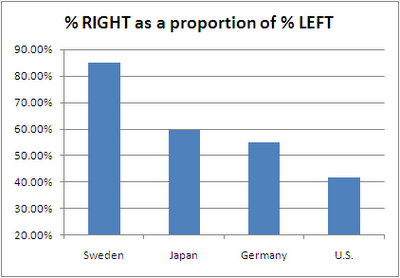 The U.S. political right, namely Republicans, has a long way to go to modernize and moderate towards the center of the American political spectrum on gender issues, something we have know for quite some time. A turn towards a hard conservative line since 2006 has only amplified the gap. Perhaps the rising influence of moderate Republican women like Olympia Snowe and Susan Collins, signals the importance of this change for the future of the party, but no such high profile individuals have yet been spotted on the House side. Indeed, the flogging of Dede Scozzafova in NY-23 indicates that those who might want to step into this role could be quickly pushed out by conservative activists.
—
* A star signifies that a party is in the majority or in the governing coalition

Renard Sexton is FiveThirtyEight’s international columnist and is based in Geneva, Switzerland. He can be contacted at sexton538@gmail.com