More than half the Democrats in the House are calling for President Trump’s impeachment and removal from office in the wake of his supporters invading and taking control of the Capitol on Wednesday. That’s according to a whip count by the left-leaning site Daily Kos as of Thursday afternoon. While many of the pro-impeachment Democrats are from very liberal districts, the effort has fairly broad and growing support. 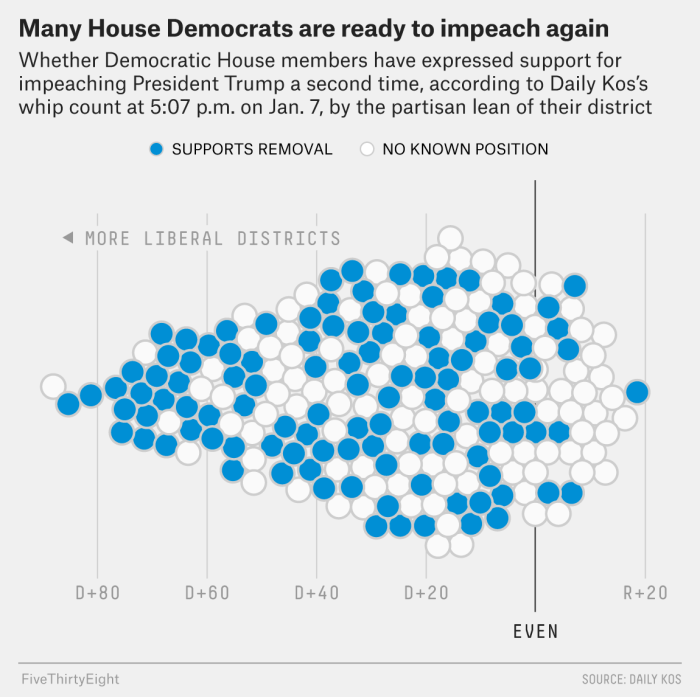 So an expanding majority of the 222 House Democrats are backing impeachment, and at least 16 senators, including Senate Minority Leader Chuck Schumer, also joining the call.

[Storming The U.S. Capitol Was About Maintaining White Power In America]

Let’s look at those questions one by one. According to Section 4 of the 25th Amendment, which has not been invoked before to remove a sitting president, the vice president and a majority of the members of the Cabinet can sign a written statement saying that the president is not fit to perform his duties, which allows him to be temporarily replaced by the vice president.

But removing Trump from power for his final 13 days in office would be super complicated, and there are a couple of reasons that this probably won’t happen. For starters, Section 4 seems designed to deal with a president being seriously injured or mentally incapacitated — it’s not written like a tool that allows officials to replace someone whose decisions people disagree with, as is the case with Trump. It’s not clear either if the “acting” members of Trump’s Cabinet, who have not been confirmed by the Senate, would be able to participate in such a vote. There’s also the reality there might not be enough votes. Trump has sacked Cabinet officials who aren’t loyal to him, like one-time Defense Secretary Mark Esper. And the Cabinet secretaries horrified by Trump’s actions may simply resign, as Transportation Secretary Elaine Chao did on Thursday, joining a number of other senior administration officials.

Impeachment might be a long shot too, as there are two big reasons that House Democrats might not wind up with an overwhelming majority of their caucus joining that push. First, Trump has less than two weeks left in office, so some of them may view trying to remove him earlier as fairly fruitless. And secondly, some House Democrats may be reluctant to impeach Trump if there is no appetite to remove him in the Senate, where convicting him would require a lot of Republican votes. The Democrats tried to get Trump out of office once before and Republicans wouldn’t go along, so some might be reluctant to try again.

There are likely procedural ways to force an impeachment vote, but realistically I would assume a vote won’t be held unless Pelosi favors the idea. On Thursday, she pushed for the Cabinet to invoke the 25th Amendment, but she did leave open the possibility of a House impeachment vote if that doesn’t happen. I tend to think impeachment would pass the House if it came to a vote, with nearly all Democrats in favor and most Republicans opposed.

The Senate currently has 99 members (Georgia’s David Perdue, who just lost his reelection bid, left a vacant seat when his term ended Jan. 3) so it would need 66 votes to remove Trump — including 18 Republicans. Earlier this year, only one Republican senator, Mitt Romney of Utah, backed Trump’s removal. You could imagine that perhaps Sens. Susan Collins of Maine and Ben Sasse of Nebraska would back Trump’s removal this time around, motivated by a combination of anger over Wednesday’s events, frustration with Trump’s refusal to concede and the security of knowing they won’t face reelection for another six years. But even though many Republican lawmakers were furious about Wednesday’s invasion of the Capitol, most of them have not been directly criticizing Trump, perhaps worried that he still has a lot of pull with the party’s base. It is hard to see eight Republicans backing Trump’s removal, much less 18.

In short, neither the executive-branch-driven 25th Amendment process nor the congressional impeachment-and-removal process seem likely to force Trump out of office, and both processes would likely fail for the same reason: They would require Republicans who have been aligned with Trump — like Sen. Lindsey Graham and Senate Majority Leader Mitch McConnell, or Secretaries Mike Pompeo (State) and Ben Carson (Housing and Urban Development) — to dramatically turn on the president. Wednesday was a terrible day in America, as many Republicans have publicly said. But it still seems unlikely that, after having been allied with him for four years, these Republicans will embarrass Trump by forcing him out of the White House days before he will have to leave office anyway.

Why many Republicans are still attempting to overturn the election