One of the problems with trying to interpret tomorrow’s results as a referendum on the parties is that all of the major candidates seem to be trying their darndest to conceal their party affiliation from you. Here, for instance, is a screen capture of a Bob McDonnell ad from the Washington Post’s website. 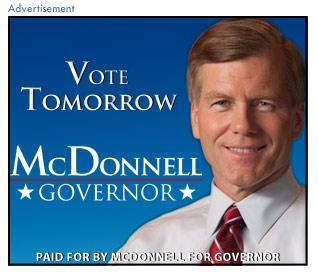 No mention at all that he’s a Republican. Hell, he’s even using the Democrats “traditional” blue color as his background, although he’s wearing a sporty red tie.

Go to McDonnell’s website, in fact, and the word “Republican” does not appear anywhere on his homepage. But McDonnell is not alone in this department. Chris Christie’s homepage does not identify his party affiliation, nor does Creigh Deeds‘s (although the branding is very Obama-esque), nor does Jon Corzine‘s (although he not-so-subtly places an [R] by Chris Christie’s name any time it appears in one of his commercials.) Bill Owens’s homepage does twice identify him as the “Democratic candidate in New York’s 23rd Congressional District”, although both instances are below the fold, and this is a guy who desperately needs to boost his name recognition. Doug Hoffman does refer to himself in passing as a “Conservative Republican” — even though, technically, he’s not a Republican, and scared the Republican nominee out of the race.

The Democratic brand is marginal in about half the country, but the Republican brand is radioactive in about two-thirds of it. The biggest story of the cycle is that a non-Republican conservative, Doug Hoffman, might win. Counterfactual: if Hoffman had in fact been the Republican nominee in NY-23 all along, would he be in the same strong position that he finds himself in today? Methinks not: it would have been easier for Owens — who isn’t much of a Democrat — to identify himself as the moderate in the race.

You can actually make the argument — although maybe it’s not a good one — that Republicans should in fact find a way to pull a Blackwater and switch their party ID when nobody is looking, from Republican to capital-C Conservative. This would probably involve at least some degree of bona fide structural change, and undoubtedly some near-term trauma: an orchestrated chaos. But the ‘conservative’ brand is just as powerful as it ever was in America, whereas the Republican brand is as weak as it has been.