As we head toward Election Day, Republicans continue to hold the edge. The GOP has a 68.3 percent chance of taking back the Senate in the latest FiveThirtyEight Senate forecast. The polling out Friday shows why Republicans have that lead but also why Democrats are still in the game.

Iowa is key. Democrats probably need to win there to have a chance of holding the chamber. Four Iowa polls were released in the past day, and they tell a consistent story: This is a close race, but one where Republican Joni Ernst holds a slight edge over Democrat Bruce Braley. Ernst led by 2 percentage points per CNN, 1 percentage point per Fox News and Rasmussen Reports, and was tied according to Ipsos.

The public polls in Iowa have been incredibly consistent. In October, the median nonpartisan sponsored poll there has shown Ernst with a 1-point lead. She has led in 12 of the polls taken during the month, trailed in two and tied in three more.

Braley has a shot to win, but you’d rather be Ernst; she’s a 64 percent favorite.

Iowa’s mirror image is North Carolina — a very close race featuring a very consistent lead, this time for the Democrat. If Republican Thom Tillis wins in North Carolina, it’s likely to be a long election night for Democrats. On Friday, CNN found Democratic Sen. Kay Hagan up 2 percentage points; Fox News had her up 1 point.

The new polls match the old polls. The median nonpartisan sponsored poll in North Carolina in October has given Hagan a 1.5 percentage-point lead. She has led in 12 polls, trailed in four (though one of those was by Vox Populi Communications, a pollster with a heavy Republican house effect) and been tied in two more. Hagan, with a 70 percent chance of winning, looks in slightly better shape than Ernst, but not by much.

The model is much more uncertain about Kansas than Iowa or North Carolina. Friday’s Fox News poll had independent Greg Orman ahead of Republican Sen. Pat Roberts in Kansas, 45 percent to 44 percent. Our model has Orman with a 53 percent chance of winning. Kansas is by far the closest race.

One of the ways the model measures the margin of error for a forecast is by looking at the disagreement between the polls and the “fundamentals,” a measure that includes a state’s partisan history and the ideology of the candidates (a liberal candidate is less likely to win in a conservative state and vice versa). And the polls and fundamentals don’t agree in Kansas. The median of the 14 polls taken in October shows Orman up by 1.5 percentage points. The fundamentals project Roberts to win by 26.3 points. That gap, and the fact that 10 percent of voters are still undecided in Kansas, translate into a lot of uncertainty.

A different type of uncertainty is found in Alaska. Rasmussen Reports’ latest poll has Republican Dan Sullivan leading Democratic Sen. Mark Begich, 47 percent to 42 percent. FiveThirtyEight’s model has the race considerably closer: Sullivan ahead by 2.4 percentage points and with a 71 percent chance to win.

As my colleague Nate Silver and I pointed out, the model is unsure about Alaska due to a lack of data and a history of bad polling. Only seven nonpartisan sponsored polls were conducted in Alaska in October. Five showed Sullivan ahead by 3 percentage points or more. The other two had Begich up by 7 percentage points or more. Only one of these seven polls was conducted by a pollster who rates higher than a C+ in the FiveThirtyEight Pollster Ratings, and that poll (by CNN) was taken at the beginning of the month.

Sullivan is flying first class. Begich is in coach. But the weather is bad, and the pilot just came on the intercom to say there won’t be any beverage service and announce the in-flight movie will be “Batman and Robin.”

Finally, one race that shouldn’t keep us up late is Virginia. Democratic Sen. Mark Warner is very likely to beat Republican Ed Gillespie. Yes, two polls released Friday showed Warner up by only 4 and 7 percentage points. The one that had him up 4 points comes from the aforementioned Vox Populi Communications (heavy Republican house effect). Warner has led in every survey taken of the race, and Vox Populi Communications’ 4-point margin represents his smallest lead. FiveThirtyEight’s model has Warner with a 99 percent chance of winning.

Overall, Republicans are leading in the races they need to be leading in. Although, as Friday’s polling demonstrates, they aren’t leading in enough states by a wide enough margin to feel overly confident about taking control of the Senate. 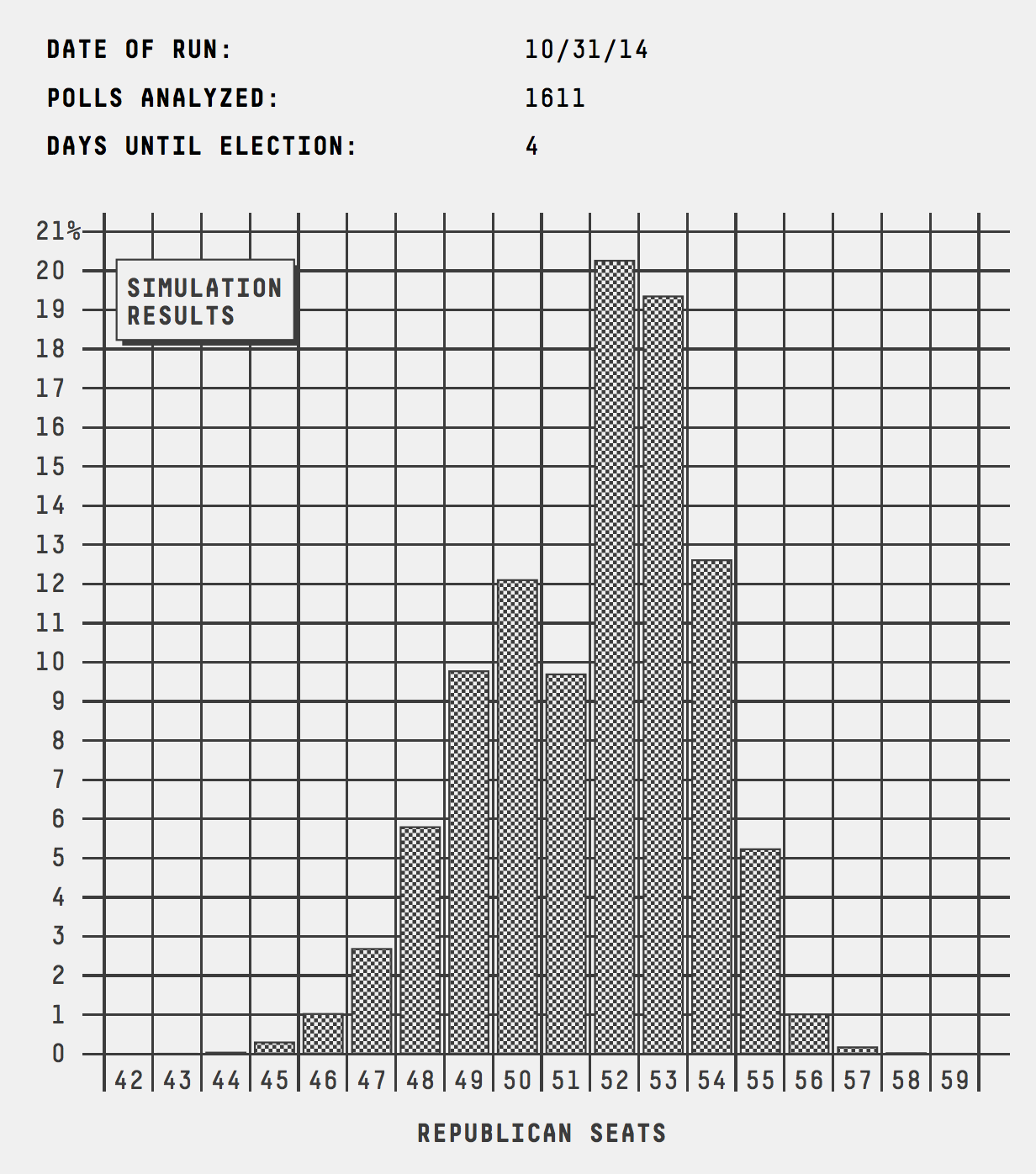