Here are the results from five recent polls on the military’s “Don’t Ask, Don’t Tell” policy on gay and lesbian soldiers. These are the number of Republican respondents who want the policy overturned. To repeat, these are Republicans only, and not the broader electorate — among the population as a whole, repealing DADT is quite popular. 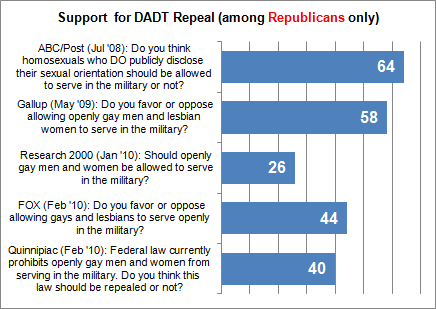 Quite a range of opinions there.

The other three polls, however, from Gallup, FOX News, and Research 2000 / Daily Kos — this is the much-discussed Research 2000 poll of self-identified Republicans which revealed very conservative attitudes on many topics — have rather similar questions. Not exactly the same: for instance, Gallup’s wording (“gay men and lesbian women“) is probably more humanizing and sympathetic than FOX’s (“gays and lesbians”). But fairly similar.

Another difference has to do with the timing of the polls. The Gallup poll was conducted last year, at a time when DADT was not very much in the news and before the tea-party movement and the flailing economy had started to make conservatism fashionable again. The FOX poll, on the other hand, was conducted last week, after the President invoked DADT in his State of the Union address. The Daily Kos poll was conducted last month, with about two-thirds of the interviews coming before the State of the Union and the other third afterward. Any of the following are possible: (i) that the sorts of people who identify as Republican has changed — become more conservative — over the past year; (ii) that the same Republican voters have grown more conservative over the past year; (iii) that the President’s invocation of DADT in the State of the Union served to ‘partisanize’ the issue.

Still, it’s hard to reconcile the difference between the FOX News and R2K/Kos polls, both of which came out at about the same time, and which featured nearly identical questions. An 18-point difference in the responses is quite large.

To be honest, I’m inclined to agree with some of the critiques of the Kos poll’s methodology. In particular, it’s hard for me to believe that the questions the poll asked — they led with questions about whether Obama should be impeached, whether he was born in the United States, and whether he’s a socialist — did not some how condition the responses to the latter questions, or induce some of the more moderate Republicans to drop out of the sample. Honestly, if I’d been up at my aunt and uncle’s place in Maine (they’re moderate, Olympia Snowe lovin’, New England Republicans), and we had this poll on speaker phone and the first few questions were about impeachment and socialism, I’d probably have started to make some funny faces and to wonder aloud about the propriety of the poll. These questions are just very different from the sorts of questions that pollsters usually ask, especially at the beginning of a survey. (Just like a good wine list, the rule of thumb is to work from light and neutral to heavier and more pungent questions.)

Indeed, there was another question that the R2K/Kos poll asked where I found the responses even more surprising. That was the question which asked: “Should openly gay men and women be allowed to teach in public schools?” Only 8 percent of Republicans, according to the poll, said yes!

This seems like a very traditional, almost 1950s style of response. There must be thousands of openly gay teachers, and it’s not like there are constantly these huge controversies about whether they should be kicked out of the classroom — which, if only 8 percent of Republicans thought that they should be allowed to teach, I imagine that there would be in some redder districts. The General Social Survey asks a somewhat similar question — “And what about a man who admits that he is a homosexual? Should such a person be allowed to teach in a college, or university, or not?” On that survey in 2008 (the last time it was conducted), 75 percent of those who identified themselves as “strong Republicans” thought that the gay person should be allowed to teach. Admittedly, there is an important difference between the General Social Survey, which asked about teaching in college, and the Kos survey, which asks about public schools. But a difference between 75 percent and 8 percent? Color me skeptical.

In short, it appears to me that the Kos/Research 2000 poll — probably for reasons having to do with the nature and ordering of the questions although other hypothesis are plausible — wound up with a very and perhaps unrepresenatively conservative set of Republicans. Upon further examination, I’d encourage caution in interpreting its results. I’m happy that pollsters are exploring “politically incorrect” attitudes such as these, but they require a lot of sensitivity to survey design. I’m not sure that Research 2000’s methodology, which led by hitting the respondent over the head with a 2×4 with questions about impeachment and socialism, really got it right.