Voters will go to the polls in opposite corners of the country on Tuesday. In New York’s Ninth Congressional District in Brooklyn and Queens, they will be picking a replacement for Democratic Representative Anthony D. Weiner. And in Nevada’s Second Congressional District, which encompasses nearly all of the state outside Las Vegas, they will be choosing someone to replace Dean Heller, a Republican, who was appointed to the Senate in May after John Ensign resigned.

Republicans are favorites in both races.

When we wrote about the New York race last week, that was not necessarily the case: the polls were ambiguous, and I noted that there were some nonpolling factors — like superior fund-raising — that might break the “tie” in favor of the Democratic candidate, David I. Weprin.

Two polls have come out since then, however, and both find that the Republican Bob Turner has pulled ahead. A poll from Siena College gives Mr. Turner a lead of 6 percentage points, 50 to 44. A Public Policy Polling survey is largely in agreement, giving Mr. Turner a 47-to-41 edge.

That is certainly enough to make Mr. Turner the favorite. But a 6-point lead, even across multiple polls, is not as solid in a special election to the House as it would be in a race for Senate or governor.

I was able to identify 10 special elections since 2004 in which there was at least one nonpartisan poll that was conducted in the field within the final two weeks of the campaign. The polling average has called 9 out of the 10 races correctly. But pollsters have had their stronger and weaker nights. 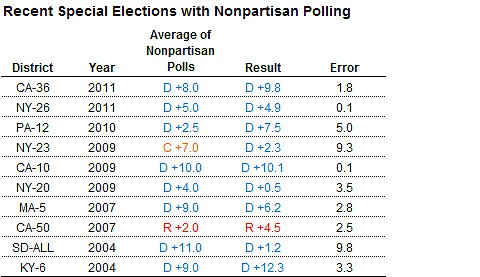 May’s special election in New York’s upstate 26th Congressional District was called almost on the nose, with the polls correctly anticipating the 5-point victory for the Democrat, Kathy Hochul.

But a special election in 2009 in another upstate district, the 23rd, was a swing-and-a-miss for the polls, which called for Douglas L. Hoffman, the Conservative Party’s nominee, to win by 7 points. Instead, the Democrat, Bill Owens — who received a late endorsement from the Republican, Dede Scozzafava, after she dropped out of the race — won.

Pollsters also had a near-disaster in South Dakota in 2004, when the last poll predicted Stephanie Herseth Sandlin, the Democrat, would cruise to an 11-point victory. She won by just 1 point instead.

In last year’s special election in Pennsylvania’s 12th Congressional District, won by the Democrat, Mark Critz, a late Public Policy Polling survey gave the Republican, Tim Burns, the lead, although the average of polls got the result right.

Over all, the root mean square error of the polling average in these races has been about 5 points when compared with the actual results. That means the margin of error (or 95 percent confidence interval) is fairly broad — roughly plus or minus 10 points.

Mr. Weprin trails by an average of 5.4 points in the three most recent nonpartisan polls, within this margin of error. (I count both the Public Policy Polling and Magellan Strategies polls as nonpartisan because both polls were paid for by the survey firms themselves, although these firms conduct surveys for Democratic and Republican candidates, respectively.)

That means Mr. Weprin stands a chance. But in no way, also, should the race be thought of as a “tossup” or “too close to call.” Given his deficit in the polls, he has only about a 14 percent chance of pulling out the election based on these surveys.

As I mentioned last week, some of the nonpolling factors slightly favor Mr. Weprin: his significant fund-raising advantage, for instance, could translate into a superior turnout operation. Even if you were to spot him 2 extra points for this, however — which is probably generous — he would still be a 3-to-1 underdog.

And the error could just as easily run in the other direction, meaning a double-digit win for Mr. Turner.

The Nevada race, meanwhile, which had once been expected to be close, instead looks safe for the Republican, Mark Amodei, who leads by 13 points in the only recent poll.

That would translate into only about a 1-in-200 chance of the Democrat, Kate Marshall, pulling out a miracle.