So far, we’ve had two polls of the Missouri Senate race since Representative Todd Akin made his remarks about rape on Sunday. The first survey, conducted by Public Policy Polling on Monday night, had Mr. Akin holding onto a one-point advantage in the race. But a second poll, conducted Wednesday night by Rasmussen Reports, had his opponent, the Democratic incumbent Claire McCaskill, up by 10 percentage points instead.

My view is that the Rasmussen Reports poll represents a more-realistic portrayal of the race as it stands now. It postdates the Public Policy Polling survey by 48 hours: potentially relevant as many Republicans denounced Mr. Akin and tried to coax him out of the race on Tuesday and Wednesday.

And the news of Mr. Akin’s interview on Sunday may have taken some time to sink in with voters. Not every Missourian follows the habits of the typical Beltway reporter, checking Twitter every few minutes and reacting instantaneously to each news event. There is reasonably sound empirical evidence that controversies of this magnitude can be quite harmful to candidates in the end.

There was one element, however, that the polls had in common. Both showed a large number of Republicans who were not willing to declare their support for either Mr. Akin or Ms. McCaskill. 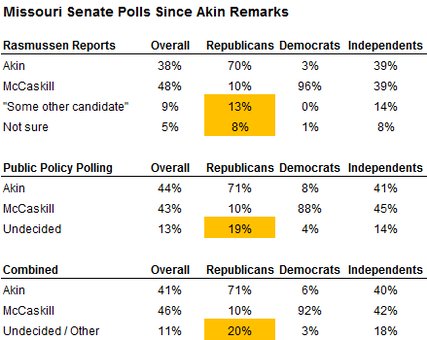 In the Rasmussen Reports poll, 13 percent of Republican voters said they planned to vote for “some other candidate.” Another 8 percent said they weren’t sure whom to support.

By contrast, just 1 percent of Democrats said they weren’t sure whom they’d vote for, and almost none preferred a third-party option. Instead, 96 percent said they’d vote for Ms. McCaskill.

The Public Policy Polling survey did not provide a third-party option, but an unusually high fraction of their Republican respondents — 19 percent — said they were undecided in the race. Just 4 percent of Democratic voters did the same.

What’s going to happen to these Republicans? That may determine whether Mr. Akin still has a shot of winning.

The most optimistic interpretation for Republicans is that some of these voters will grudgingly vote for Mr. Akin in the end. Perhaps, even, the high number of undecided Republicans reflects social desirability bias. (Some of these Republicans are prepared to cast a ballot for Mr. Akin, but they’re not willing to tell a pollster that when it might be politically incorrect to do so.)

However, both the Public Policy Polling and the Rasmussen Reports polls were automated surveys: voters were pushing buttons on their phones rather than talking to another human being. Although automated surveys can introduce other problems, reducing social desirability bias may be one of their benefits, since voters may feel as though their answers are more anonymous.

So it’s important to keep in mind that these undecided Republicans do have some other options. They don’t have to pick between two unacceptable alternatives if they don’t want to.

First, there is, in fact, a third candidate on the Missouri ballot: Jonathan Dine of the Libertarian Party.

Second, Republicans could deliberately undervote the Senate race, skipping it while voting for the presidency and other contests.

Or third, they could simply not turn out to vote at all. In polls, “I’m undecided” can sometimes be code for “I’m sitting this one out.”

Reduced Republican turnout would hurt Mitt Romney in Missouri, but I don’t think this should be a major concern for Republicans. He holds a large enough lead there to have some cushion in the event of reduced turnout. And although he could lose the state, it would probably be only in cases where he was having problems elsewhere on the map, and President Obama was already well on his way to 270 electoral votes and a second term.

The Senate race is another matter.

The parade of Republicans who denounced Mr. Akin were making a sensible move, in the hope that they might persuade him to abandon the race, or failing that, to minimize the damage to the national Republican brand.

But when high-profile Republican leaders from Mr. Romney to Sean Hannity conveyed the idea that Mr. Akin was an unacceptable choice, Republican voters may have gotten the message. It seems unlikely that many of them will vote for Ms. McCaskill. But if 20 percent of Republicans vote Libertarian instead, or just skip the race, she’ll be a heavy favorite.