The 2003 Detroit Tigers were a shining beacon of bad baseball. This was true both as a team — they lost 119 games, the second-most of any MLB team since 19011 — and also at the individual level. Hapless starter Mike Maroth, for instance, became the only pitcher to lose 20 times in a season since 1980 (and perhaps the last ever to earn that not-so-proud distinction).

And yet, this year’s Tigers might be every bit as awful.

The FiveThirtyEight projection model thinks the 2019 Tigers will fall a bit short of the 2003 version’s loss total, predicting 111 defeats for Detroit by season’s end. But in terms of other measures, such as our Elo ratings, these Tigers are astonishingly close to their abysmal predecessors. Through 125 games, the Tigers have an Elo of 1398, which not only means Detroit has wrested the crown of “Worst Team in Baseball” away from the Baltimore Orioles — a title that once seemed impossible for the O’s to lose — but it also makes these Tigers just the 14th team ever to have an Elo under 1400 at this stage of a season. Their Elo is currently within striking distance of the 2003 team, which had a 1387 rating at this point in the schedule, and the current Tigers were slightly ahead of their ancestors in the race to baseball’s bottom as recently as eight games ago: 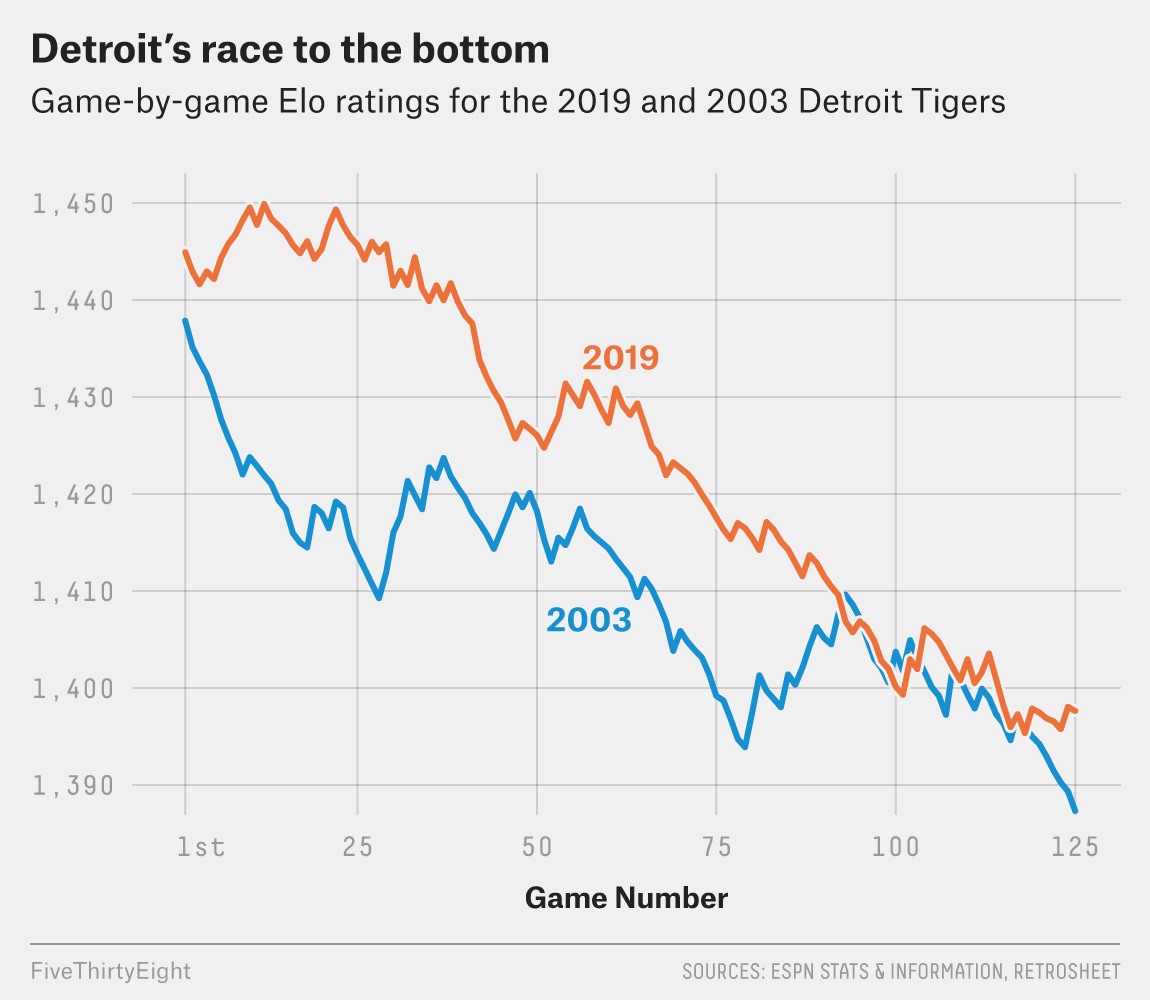 (All of this is true even after Detroit pulled off a shocking win over the Houston Astros Wednesday night, in one of the biggest upsets of the 21st century.)

It’s never good to be compared with that infamous 2003 squad — even if the current edition of the Tigers was intentionally built to “compete” with the Orioles and Miami Marlins for the No. 1 pick in next year’s draft. After years of enjoying superstar performances from Justin Verlander, Miguel Cabrera and Max Scherzer, Motor City fans were hoping they’d never again return to the days of Maroth, Bobby Higginson and Ramón Santiago. But history is repeating itself with the likes of Jordan Zimmermann, JaCoby Jones and Jeimer Candelario this year.

Then came one of the sharpest downturns in baseball history. Slugger Juan González — for whom the Tigers had traded a number of their best prospects just a year before — left the Tigers via free agency, the team was fleeced in a handful of trades, the farm system yielded little of note, and the rest of the players Detroit staked its future on (Higginson, Dean Palmer, Damion Easley, etc.) all stopped being productive. Over the four-season period from 2000 to 2003, Detroit’s record got progressively worse each year, by an average of 12 wins per season. By 2003, the Tigers were spending a combined $37 million (or 54 percent of the MLB median team payroll that season — the equivalent of $69 million today) on eight players2 who together generated 0.18 Wins Above Replacement.3 It was a masterclass in how to turn an average team into a 43-win one practically overnight.

The Tigers won five of their last six games to avoid tying the 1962 Mets’ record for futility. But they also needed bad luck to win so little in the first place. No MLB team truly contains 43-win talent — we think? — and the Tigers undershot the record we’d expect from their run differential by five wins in 2003, with another six-win deficit coming from the team’s run differential falling short of its underlying metrics. Add in even more bad luck from players unexpectedly producing career-low numbers,4 and the 2003 Tigers were probably a team with 55-to-65 win talent and some of the worst luck in baseball history. Manager Alan Trammell, a Tigers legend as a player, deserved better than to manage such a notoriously cursed season of Detroit baseball.

A few teams have come close to matching the ‘03 Tigers ineptitude in the years that followed. The very next season, the Arizona Diamondbacks lost 111 games, just three years removed from winning the World Series. The 2013 Astros (111 losses) and 2018 Orioles (115) also made valiant runs at the Mets’ record this decade. In fact, the recent prevalence of tanking teams has created more historically awful teams than ever before: This season alone, our model thinks four teams — the Marlins, Royals, Orioles and Tigers — will each lose more than 100 games.

Detroit’s current path to horrendousness was similar — if slightly more straightforward — than the one the team followed 16 years ago. These Tigers were also coming off a period of sustained success, with MLB’s fourth-best record from 2009 through 2014 and three consecutive League Championship Series appearances in 2011, 2012 and 2013 (including an AL pennant in 2012). But by the end of that stretch, Detroit found itself with an old, expensive roster and a bunch of money committed to veteran stars like Cabrera and Verlander. (Though not Scherzer, oddly enough. Then-general manager Dave Dombrowski let Scherzer walk to the Washington Nationals after the 2014 season; all Scherzer has done since then is lead all MLB pitchers in WAR.)

After a downturn to start the 2015 season, in which they would finish finish 74-87, Dombrowski unloaded recently-acquired stars David Price and Yoenis Cespedes at the trade deadline and then was eventually relieved of GM duties himself. The Tigers regrouped for one last bid with an aging core in 2016. It worked, to the extent Detroit had a winning record (86-75) again. But the team missed the playoffs by three games despite once again having one of the highest payrolls in baseball. And when the wheels fell off for good in the summer of 2017, the fire sale was on; midseason deals sent away Verlander, J.D. Martinez, Justin Upton, Alex Avila, Justin Wilson and pretty much anybody else who wasn’t nailed down.

Maybe the Tigers held out for too long before hitting the reset button, trying to extend their window beyond the point of reason. But once it began, this was a conventional rebuild — Detroit flipped their desirable veterans for prospects like teams are supposed to do. Early on, though, the prospects haven’t provided much in return. Of the 17 prospects acquired, only four have made the majors so far, and only one — third baseman Isaac Paredes (acquired from the Cubs) — ranks among the team’s top five prospects according to Baseball America. Most of the prospects are still young, so there’s plenty of time for them to add value in Detroit uniforms. For now, those young Tigers have a lot of ground to make up for the team to break even on its fire-sale deals.

Perhaps relatedly, going into the 2019 season, Baseball America ranked the Tigers’ farm system as the 14th-best in baseball. On the one hand, that’s the highest organizational ranking Detroit has had since 2007 and a major improvement after the team ranked among the bottom six nine times between 2008 and 2017. (Blowing up a minor-league system to keep the big-league team competitive is a Dombrowski specialty.) But it’s also behind schedule for the type of total teardowns the Tigers are trying to emulate, such as those executed by the Astros and Chicago Cubs earlier this decade. By the same stage in their respective rebuilds — judging by when each team dipped below 70 wins for the first time in its ramp-up towards contention — the Astros had MLB’s ninth-best system and the Cubs ranked fourth: 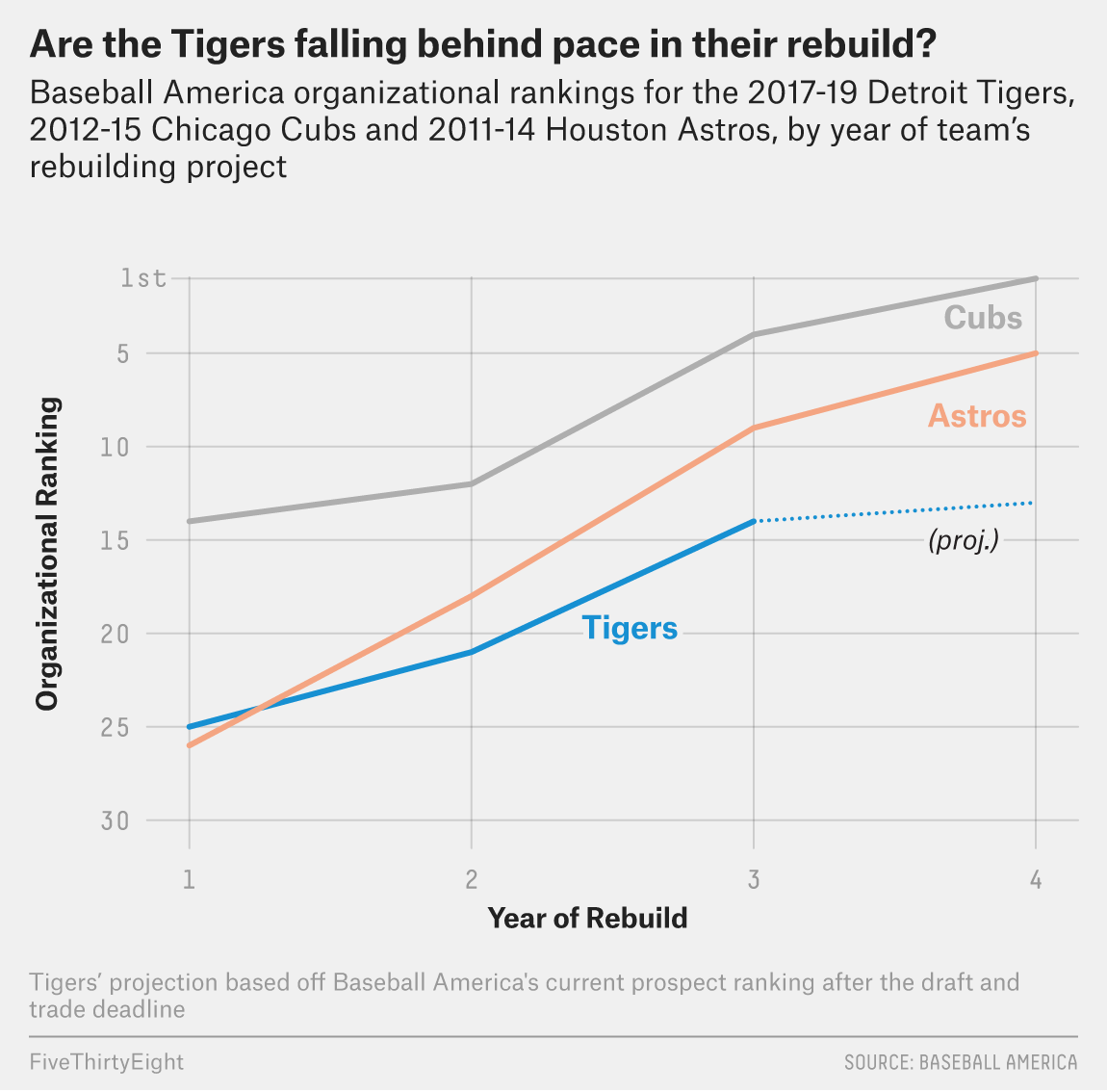 Detroit’s current farm system ranking improved to 13th after its midseason deals this year, and that’s roughly where the Tigers were (12th) back in 2003. The core of that young group — led by Curtis Granderson — played a big role in leading Detroit to a surprise World Series appearance within three years of its 119-loss catastrophe. That model might be a good one for the Tigers to follow when they are finally ready to compete again. But it’s also worth wondering whether bottoming out has the same competitive advantage now that so many other teams are also doing it. When the Tigers lost 119 games, by contrast, that was 20 more than any other team in baseball. The ‘03 Tigers didn’t mean to build one of the worst teams ever, but the 2019 version can’t make that case as convincingly — and neither can the Orioles or Marlins. Nor can this year’s team claim anywhere near as bad luck as in 2003.

As it stands now, the Tigers are currently in the driver’s seat when it comes to the race for next year’s No. 1 draft pick. Though they’ve built one of the worst teams of all time, it will all be worth it if they can use the picks and prospects to get back to the World Series quickly, just like the Cubs and Astros — or even an earlier version of the Tigers — did not so long ago. But if not, are all the losses be worth it? Because no one fan base should be forced to watch multiple 110-loss seasons in the span of 16 years without some World Series swag to show for it.