Marquise Kennedy was a junior at Brother Rice High School in Chicago when the Jesuit university uptown made a run to the Final Four of the 2018 men’s NCAA tournament. Kennedy knew almost nothing about Loyola basketball. He doesn’t even recall watching many of the games. “I was kind of late to it,” he said Monday. But when he heard about the Ramblers making the Final Four, he decided to give them a look. Later that year, Kennedy committed to play basketball at Loyola of Chicago. He was the highest-rated recruit in school history.

The 2017-18 Ramblers were the quintessential March Madness Cinderella story. They entered the NCAA tournament at 28-5, earned a No. 11 seed and managed to pull off four straight upsets — the first two on game-winning shots in the last five seconds. They even had the tournament’s favorite 98-year-old nun, Sister Jean, as a lucky charm. Three years later, Loyola should be back in the tournament, but this time it won’t be as a Cinderella. The Ramblers, ranked No. 22 in the latest AP poll, could actually end up dramatically underseeded. In Ken Pomeroy’s adjusted efficiency rankings, they’re the 15th-ranked team in the country1 — they were 41st entering the 2018 NCAA tournament — and yet BracketMatrix.com projects them as a No. 10 seed.

The storybook Final Four run put Loyola on the fast track to building a team like this year’s. Its best player is 6-foot-9 center Cameron Krutwig, who’s shooting 61 percent from the floor and scoring 15.5 points per game with 6.1 rebounds, putting him sixth in Pomeroy’s national player of the year standings. Krutwig was the only freshman starter on the 2017-18 team.

In the weeks following the 2018 Final Four, Loyola signed a transfer, Tate Hall, who would become its second-leading scorer this season. And in the ensuing months, the Ramblers, suddenly a nationally known name, secured a top-100 recruiting class in 2019 — ranked first in the Missouri Valley — with three of the top five recruits in program history. The star of the class was Kennedy, who chose Loyola over Florida State, Wichita State and Illinois State. He’s a role player on this year’s team, shooting 57 percent from the floor and 7-for-19 from the 3-point line in 17 minutes per game. 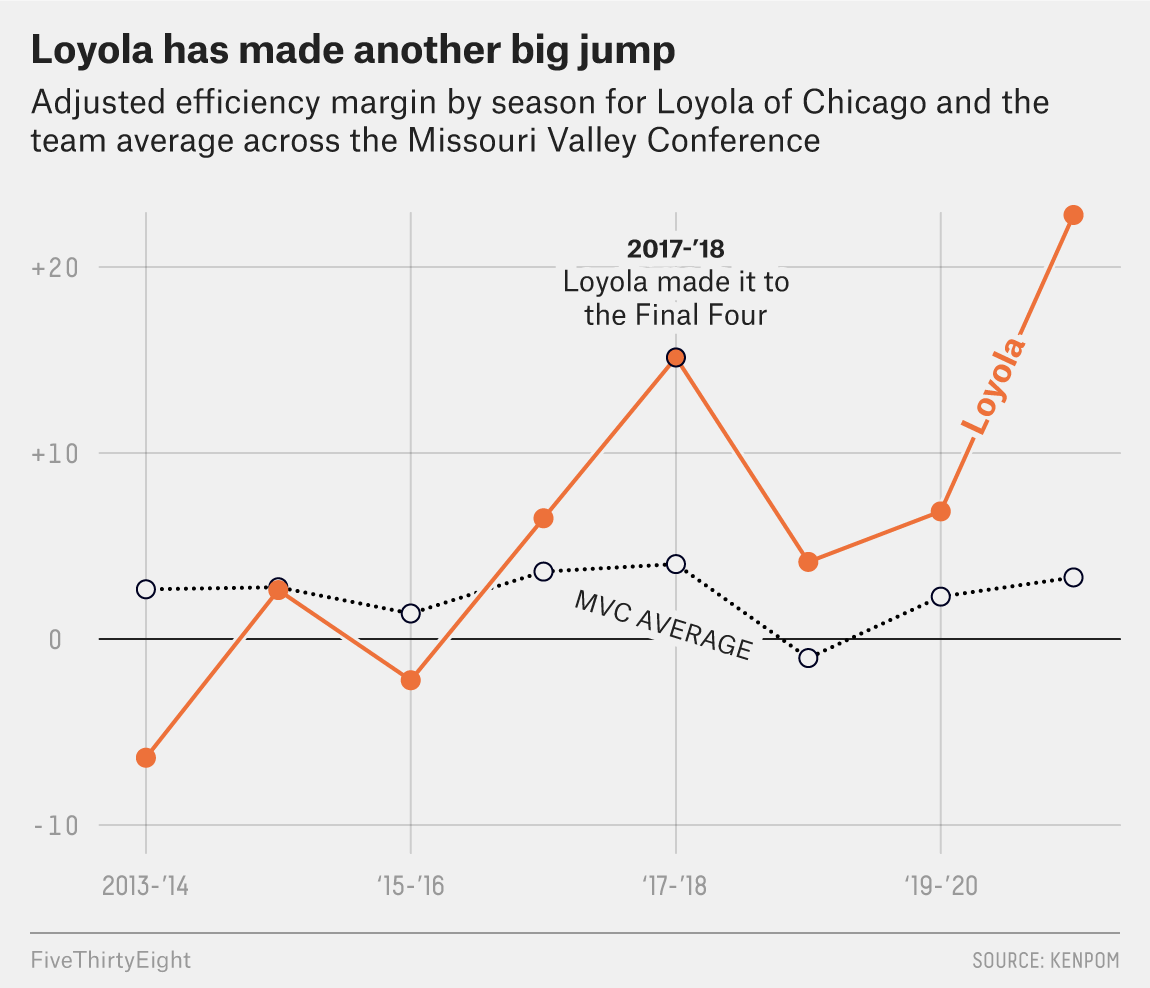 The Missouri Valley has delivered some of the country’s best mid-majors over the years, and in terms of per-possession efficiency metrics, this Loyola team can play with all of them. The gold standard would be the Wichita State teams of the 2010s, which made six straight NCAA tournaments from 2012 to 2017 before departing for the American Athletic Conference. By Pomeroy’s metrics, Loyola is the fourth-best MVC team in the past 20 seasons, trailing only three of those Wichita State teams (2012, 2014, 2017). This Loyola team can draw on experience as it hopes for a deep March run. “We try not to talk about it a whole bunch and all that,” Kennedy told me, “but it’s hard not to talk about it when we’re playing so well. We have such a great chance to do big things again.”

But it doesn’t appear the rest of the country has taken notice. Loyola wasn’t ranked in the AP or coaches’ poll until it entered this week, and a double-digit seed would be a snub of historic proportions. If the bracket were seeded today based on the BracketMatrix aggregate, Loyola would be the second-best double-digit seed of the past 20 seasons, trailing only — of course — Wichita State. The 2016-17 Shockers entered the NCAA tournament as the eighth­-best team in the country, according to Pomeroy’s metrics, and yet they earned a No. 10 seed. Kentucky coach John Calipari has made a habit of criticizing the selection committee’s seeding, but that year he had a legitimate beef. His second-seeded Wildcats faced Wichita State in the second round and escaped by blocking two 3-pointers in the last 15 seconds.

Perhaps the committee’s eyes this week should be on Des Moines, Iowa, where the MVC’s top two teams will face off twice. Drake (18-1) enters this weekend on an opposite trajectory from Loyola: The Ramblers lost three times in their first 10 games before rattling off 10 straight wins, while the Bulldogs were undefeated until a 74-57 upset at Valparaiso on Sunday. Drake cracked the top-25 poll last week on the strength of its undefeated record but still has not faced a team ranked in Pomeroy’s top 120. And while Loyola has won nine of its last 10 by double digits, four of Drake’s previous five league wins had come by 7 points or fewer. As a result, the Bulldogs rank 63rd in Pomeroy’s system.

In fact, Drake appears poised to be a seeding error of a different sort. BracketMatrix.com slots the Bulldogs in as a No. 9 seed (the 35th-ranked team).2 There’s a bit more precedent for the reverse disparity between efficiency rankings and seeding, but it’s close: In the past three tournaments, no team has earned a top-nine seed with an adjusted efficiency rating below 13; Drake’s rating after Monday’s games was 13.84. Of course, both Loyola and Drake will have chances to make a case on the court this weekend. But as of now, the advanced stats would justify a significant correction to both teams’ NCAA tournament outlooks.

Until Sunday, Drake’s case for a high seed centered on an undefeated record in a strong mid-major conference.3 It’s Loyola that should concern the selection committee over the next few weeks. If the Ramblers become a double-digit seed, a No. 2 or No. 3 seed could end up in a second-round game against a team that plays like a No. 4 seed, and the coach wouldn’t have to be Calipari to be upset about that draw. Three years after stunning college basketball, Loyola appears to have some staying power.