There has been a tremendous amount of talk lately about a double dip recession. According to some, it is just a matter of time. The idea has even been floated that the recession never ended.

Let’s break it down into service and manufacturing sectors as represented by the ISM numbers. Remember, a number above 50 indicates an expansion: 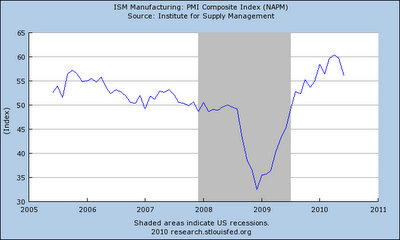 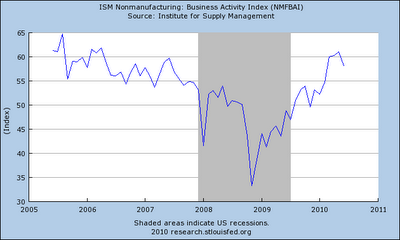 Like the ISM manufacturing index, the ISM services index has been increasing since the end of 2008 . It has been printing above 50 for nearly a year.

So — both sides of the economy are in expansion mode, and have been for awhile. In addition, they’re not “just over the line.” Both are printing strong numbers.

Regarding manufacturing, how is industrial production? 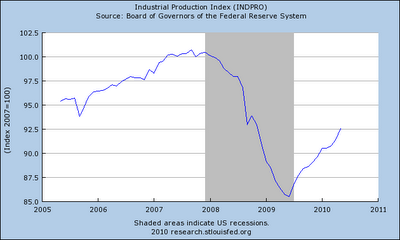 Industrial production started to increase in mid-2009 and has been in an uptrend since. In addition, 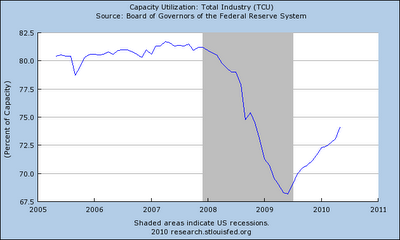 Capacity utilization has been increasing since a little before that time. However, this number is still below the lows of the previous expansion, indicating we have a long way to go.

In other words, the US industrial capacity is increasing/expanding and the economy is making up as much ground as realistically possible.

So, why don’t we break GDP down into its components? 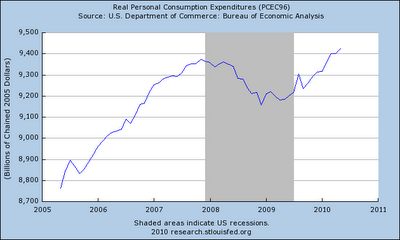 Real PCEs have been in an uptrend for nearly a year. They are now higher than their 2008 peak. 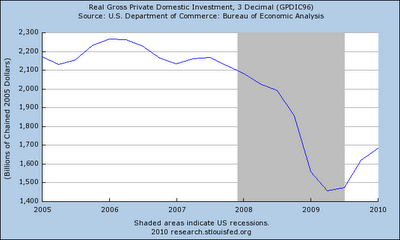 Gross private domestic investment has been increasing for three quarters. 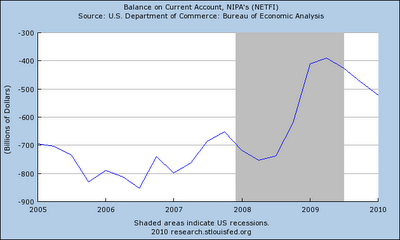 While the balance on the current account is moving in the wrong direction, it’s also important to note that 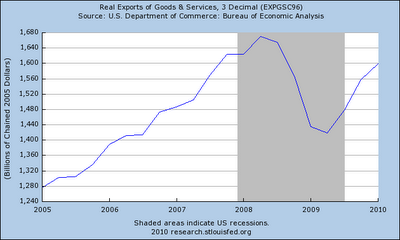 Real exports of goods and services are increasing.

And finally, there is real GDP 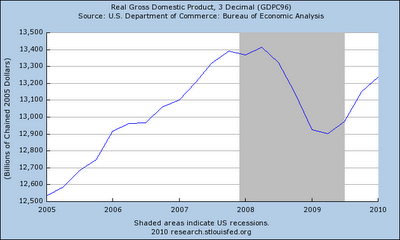 Which has been growing for the last three quarters.

The preceding graphs illustrate a very important point: overall things are much better now than they were a year ago. Many parts of the economy have seen growth and improvement.

Here are the points of concern.

1.) Unemployment: job creation has been incredibly weak and the unemployment rate is still high at 9.5%. Initial jobless claims have been in the 450,000-480,000 range since the beginning of the year, indicating there is a fundamental issue with the employment market. Adding to the problems are the types of jobs lost. About 25% are construction, which won’t be coming back anytime soon given the current situation in the housing market. About another 25% are manufacturing jobs, which also aren’t coming back soon, largely because of increased productivity. As for the other jobs, there are four reasons why hiring has been slow: increased productivity, low capacity utilization, low hours worked and overall uncertainty. Simply put, it will take a long time for the unemployment rate to decline.

The real problem here is how Washington has chosen to deal with the topic — namely, cutting off unemployment benefits in the name of austerity. Frankly, I don’t see how that can last more than a few months without all the people in Congress getting a really nasty earful from the folks back home. However, I could be wrong — we are talking about Washington, after all.

2.) Housing: as I wrote a few weeks ago, housing faces a huge over supply issue. This will probably lead to further price declines. How much is anybody’s guess. However, what should happen is an extension of the home buyer tax credit. If this doesn’t happen housing will be an issue going forward.But notice that housing has not contributed positively over the last year and the economy has still expanded.

3.) China: here’s the central issue. Yes, China is trying to put on the economic breaks. But they’re going to slow from over 10% GDP growth to below 10% GDP growth. Even if they come in at 6%, they will still provide positive momentum going forward for their trading partners.

4.) Europe: If they really wanted to get out of the EU arrangement, this would have been the time. Instead, the EU has pledged about $1 trillion to stabilize the region’s debt situation. In addition, it looks as though plans to implement the bail-out are moving forward.

5.) Austerity issues: this is the big wild card going forward. If the governments become too enamored with spending cuts they will essentially be cutting off their nose to spite their faces. I’ve highlighted the poor record of countries that have tried austerity before their economies were ready (see here and here).

From my perspective the China issue will lead to slower growth but not a recession. Europe appears to have a solution to the sovereign debt issue; what matters now is implementation. But, that situation also appears to be moving in the right direction (the euro’s recent move from a bottom indicates traders are gaining more confidence in the solution as well).

That means the real issue is Washington — or, more specifically, political stupidity screwing up the economy. If they do the, “we’re not going to spend any more money” gambit, then we’re in real trouble. Simply put, this is not the time to withdraw support and help for the economy.

But, even with moderate help there is enough strength in the economy to muddle through.

At the end of last August, I wrote a price titled The Fits and Starts Expansion. I used that title specifically to illustrate the type of growth we would see: one area of the economy will lead for a few months, then another would take over as the first fell back. So instead of all parts working in harmony, parts would take turns leading. As a result, we would experience slower growth, largely in the 1%-2% range. That is still the primary scenario I see going forward. It won’t be pretty, but it will be growth.

Finally, as I noted previously, interest rates are low and oil is cheap. Additionally, all this talk about double dip recessions has failed to highlight why the last one happened: a huge spike in interest rates by the Federal Reserve to tame inflation. There is no way the Fed is going to increase rates right now.