The total wealth of American households hit an all-time high late last year, according to a new report. But the rebound has been driven by a strong stock market, skewing the gains toward the rich, who are more invested in stocks than the less well-off.

During the most recent recession, household net worth took a beating. (Net worth is total assets minus total liabilities.) From a peak in late 2007 to a nadir in early 2009, about $13 trillion in wealth disappeared.

Since then, the rebuilding of wealth has been slow and steady. The Federal Reserve’s latest Financial Accounts of the United States, or “Flow of Funds” data, shows households’ net worth hit a record of just over $80 trillion at the end of last year. (That’s in nominal dollars, but adjusted for inflation it’s still a record.)

But that wealth looks very different today compared with the last post-recession recovery: 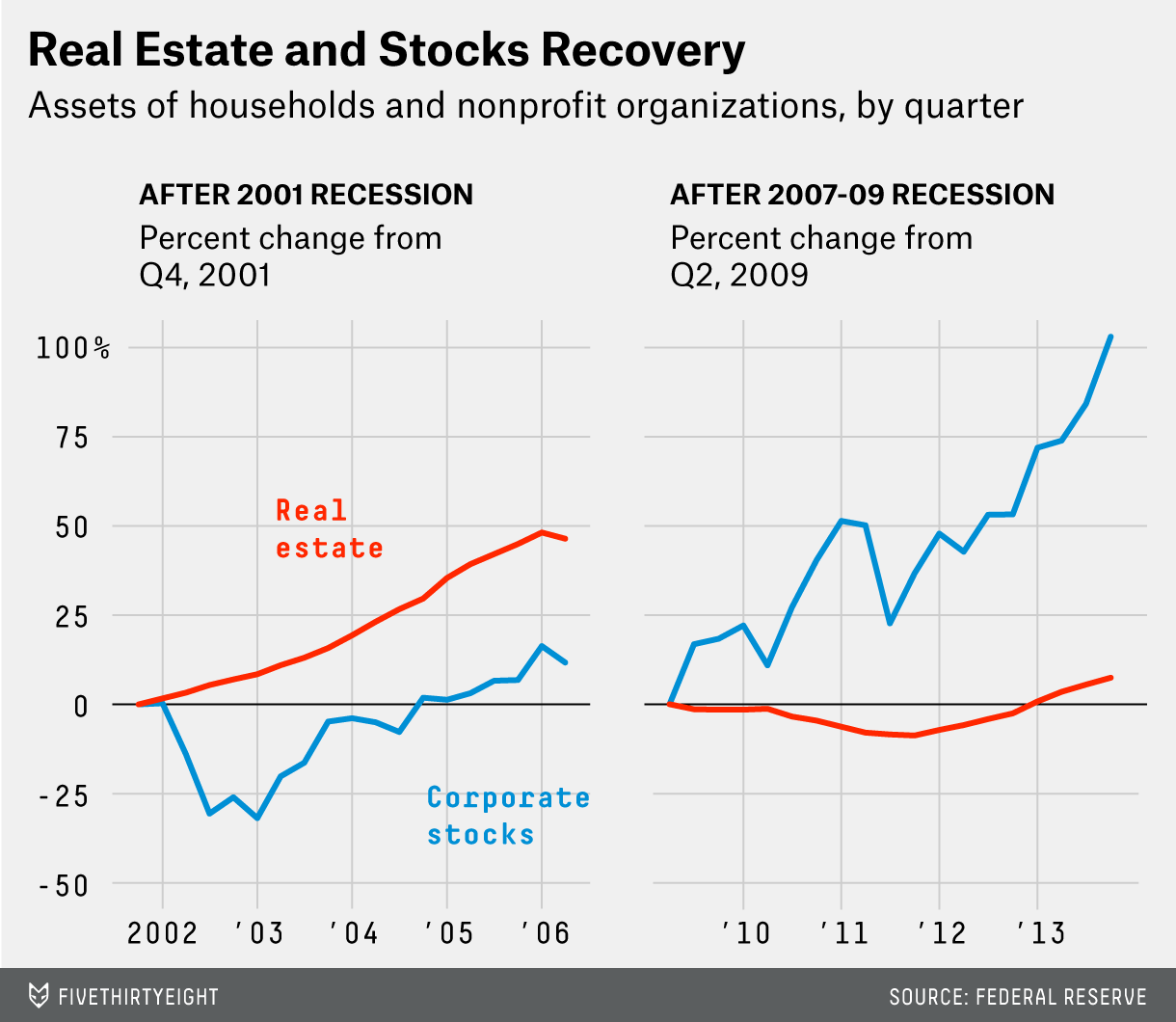 This is a plot of Flow of Funds data, which groups households with nonprofit organizations. (Nonprofit groups make up a small share of the total assets, so the data is really a rough approximation of household wealth.)

The chart shows the growth of corporate equities, or stocks (blue line), and real estate (red) from the beginning of each recovery. There are other assets besides stocks and real estate, of course. But it’s worth focusing on these two, which represent 23 percent and 15 percent of total assets, respectively.

They help us to see how the two recoveries are very different.

In 2001, after a mild, eight-month recession, the economy began to grow in the fourth quarter. The stock market did not. The aftershocks of the Sept. 11 terrorist attacks and a deflating tech bubble brought down markets, and with them household investments. Total household net worth actually declined a bit in 2002 before taking off in 2003. Growth in this period was on the back of real estate, and households’ equity in their homes grew in lockstep.

The post-Great Recession recovery is a different story: Equities, as a household financial asset, have nearly doubled, and real estate is barely above pre-recession levels.

This has major consequences for understanding the average household’s net worth. Americans at many socioeconomic levels own real estate, but stocks are mostly owned by the wealthy. So while we should welcome the record-setting numbers for gross household net worth, we still don’t know whether the median household is any wealthier than before the recession. (Data for 2013 median household wealth won’t be available until the Census Bureau releases more recent data on Wealth and Asset Ownership.)