Bill McGurn, an editorialist for the Wall Street Journal and former speechwriter for George W. Bush, opines in today’s Journal that Republicans were prepared to vote for the stimulus — if only the Administration had given a little.

For another, a stimulus package with strong bipartisan support was well within his reach. Even at full strength, the Republicans didn’t have the votes to obstruct the stimulus if they had wanted to. And with a little imagination, a White House in search of bipartisan support might have easily picked off Republicans by exploiting differences within the party.

Michigan Rep. Thaddeus McCotter suggests, for example, infrastructure as one area popular with some of his fellow Republicans. Had Democrats added, say, a few more infrastructure projects, perhaps a half-dozen Republicans in the Senate and as many as 30 or 40 in the House might have signed on. But the White House went the other way.

So with relatively small changes to the stimulus (“for example, a few more infrastructure projects”) McGurn says Rep. Thad McCotter told him, “as many as 30 or 40 in the House might have signed on”.

The problem with McGurn’s logic is that the administration did wind up giving a little bit. And no Republicans came along for the ride.

First, take the original stimulus bill as passed by the House. This bill contained $275 billion in tax cuts and $544 in government spending. No Republicans voted for it. Fair enough.

As a point of comparison, we can look at the Camp/Cantor Amendment, which would have gutted the bill of all spending provisions but for an extension of unemployment benefits while increasing the tax cut provisions. The bill under the Camp Amendment, as best as I can tell, would have contained $47 billion in spending (the cost of the unemployment benefits) and $363 billion in tax cuts. Out of 178 Republicans in the House, 168 voted for the Camp Amendment.

We can plot these two versions of the bill on a graph: 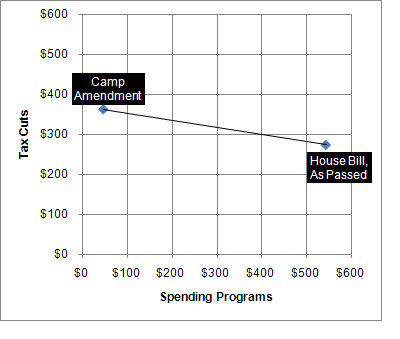 So what would have happened if a compromise had been reached somewhere between the two poles — somewhere along the line I have drawn? Presumably, some fraction of the Republicans who voted for the Camp Amendment would have voted for it?

It turns out that we have a way to find out. That is because the House had a second chance to vote on the stimulus, this time in the form of the Conference Report negotiated with the Senate. The Conference Report contained less spending — $506 billion instead of $544 billion — and more tax cutting — $281 billion instead of $275 billion — than the original bill. In both cases, it moved away from the original bill — which zero Republicans voted for — and in the direction of the Camp Amendment — which 168 voted for. More specifically, the Conference Report moved about 7 percent of the way away from the original House version of the bill and toward the Camp Amendment: 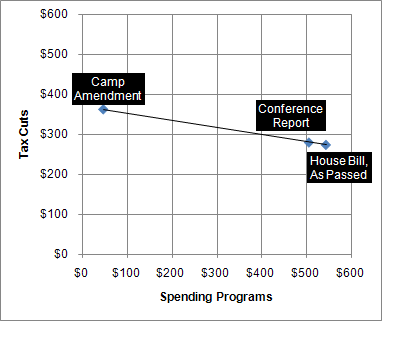 Obviously this is a superficial analysis. But if Republicans were looking for a small compromise of the nature that McCotter suggested, they got one — and none of the 30 or 40 swing votes that McCotter had promised were swayed.