Yesterday, at a fundraiser in Greensboro, North Carolina, Sarah Palin said the following:

We believe that the best of America is in these small towns that we get to visit, and in these wonderful little pockets of what I call the real America, being here with all of you hard working very patriotic, um, very, um, pro-America areas of this great nation.

Palin refers to the fact that the cities and towns she has gotten to visit represent the “real America”. So what exactly do these places look like?

Since her coming out in Dayton, Ohio on August, 29th, Palin has held (or is scheduled to hold) public events in 44 cities according to the Slate.com candidate tracker. These include all events described as “rallies”, “town halls”, “gatherings” or “discussions”, but not things like press availabilities, fundraisers or debates. 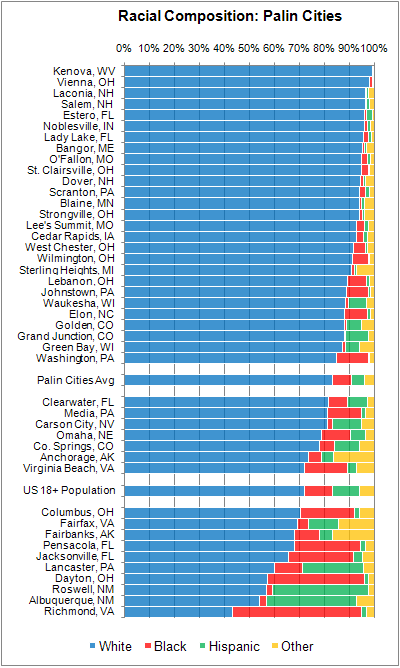 Over the same interval, Barack Obama had public events scheduled in 48 distinct cities. The racial composition of these cities was 69.8 percent white, 17.4 percent black, 8.9 percent Hispanic, and 4.0 percent other. The percentage of whites very nearly matches the US average 72.0 percent; 22 of Obama’s cities were whiter than average, and the other 26 were less white than average. Obama, however, has visited cities with a relatively larger fraction of blacks than in the US as a whole. 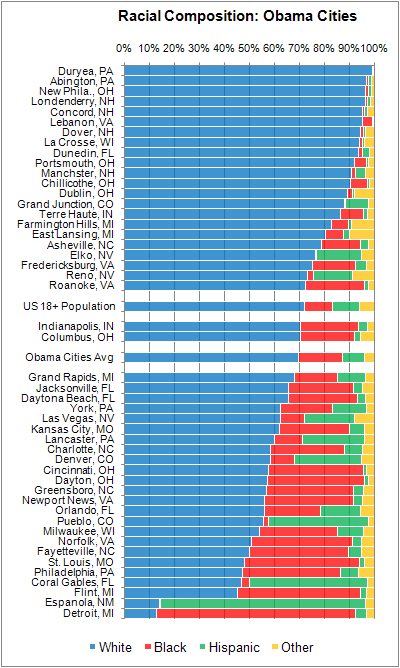 Since white voters have historically turned out at higher rates than minorities, and since there are probably proportionately more swing voters among whites than among minority groups, one can argue that Palin’s choice of locales reflects optimal strategy. Still, the difference between her geography and Obama’s is fairly striking.

** In three cases, the candidates held rallies in townships that did not have city-level data available per the Census Bureau. In these cases, county-level data was used instead.

Also, note that some of the figures posted originally were incorrect (for Palin, they reflected the entire population rather than the voting-age population as we intended). They have now been corrected.