In Monday night’s debate in Tampa, Fla., Newt Gingrich, the former House speaker, mentioned Ronald Reagan just four words into his first answer of the night. It was the first of five times that Mr. Gingrich would mention Reagan; no other candidate did so even once.

This was not, it turns out, an isolated example. Mr. Gingrich uses Reagan’s name early and often, and in almost every debate.

Over the course of the 17 debates that he has participated in during this cycle, Mr. Gingrich has used the term “Reagan” 55 times, according to debate transcripts. By comparison, the nine other Republican candidates who have participated in the debates mentioned Reagan just 51 times combined. (Rick Santorum is a distant second to Mr. Gingrich with 14 mentions.)

Mr. Gingrich failed to mention Reagan’s name at just one debate, on Oct. 11, 2011, in Hanover, N.H. However, Mr. Gingrich had mentioned Reagan nine times at the Sept. 7 debate, which was held at the Reagan Library in Simi Valley, Calif. His use of Reagan’s name has picked up recently, with 22 mentions in the past four debates. 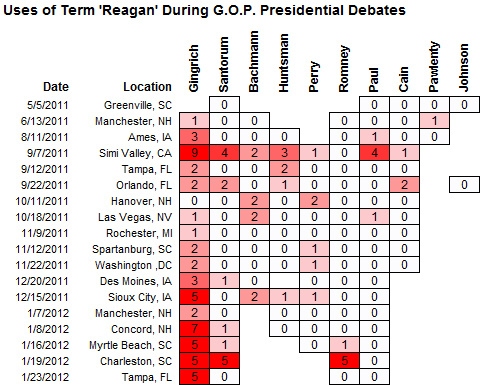 The biggest contrast to Mr. Gingrich in this regard is probably Mitt Romney. In the first 14 debates he participated in, Mr. Romney failed to mention Reagan a single time. Finally, he made an oblique reference to Reagan in last Monday’s debate in Myrtle Beach, S.C. “I appreciate the speaker’s work working in the Reagan years and in the Clinton years,” Mr. Romney said, referring to Mr. Gingrich.

Mr. Romney did mention Reagan five times during the second debate last week, in Charleston, S.C., bringing his total count up to six.

However, this case deserves an asterisk of sorts: Mr. Romney had brought up Reagan solely to tease Mr. Gingrich about associating himself with Reagan:

MR. ROMNEY: Let’s — let’s — let me — let me say — let me say one — one of the things I find amusing is listening — is listening to how – how much credit is taken in Washington for what goes on on Main Street. I — I mean, Mr. Speaker, it was – it was — you talk about all the things you did with Ronald Reagan and — and — and the Reagan revolution and the jobs created during the Reagan years and so forth. I mean, I looked at the Reagan diary. You’re mentioned once in Ronald Reagan’s diary. And it’s — and in the diary, he says you had an idea in a meeting of — of young congressmen, and it wasn’t a very good idea, and he dismissed it. That — that’s the entire mention. And — I mean, he mentions George Bush a hundred times. He even mentions my dad once.

Mr. Romney will have the opportunity to narrow the Reagan gap if both he and Mr. Gingrich make it to March 5, when there is a second debate tentatively scheduled at the Reagan Library.