In this holiday edition: merry Christmas, Ron Paul, happy Hanukkah and a sincere thank you to all our readers from the FiveThirtyEight team.

Santa has been a fickle friend to the nine Republican presidential candidates in Iowa. He seems unable to decide whose stocking to stuff. Our last Reads and Reactions came while Newt Gingrich’s stocking was overflowing with polling leads in Iowa and the nation. Well, Santa continues to dither, and now it’s Ron Paul who can’t wait to open his present. Mr. Paul has climbed atop Iowa polls, and FiveThirtyEight’s Iowa forecast currently has him and Mitt Romney neck-and-neck.

Is Mr. Paul simply the latest “surge” candidate? Will he follow the example set by Michele Bachmann, Rick Perry, Herman Cain and Mr. Gingrich in climbing quickly to the rooftop of Iowa polls only to fall down the chimney just as rapidly? Don’t be so sure.

The Economist’s Will Wilkinson looked at the Paul campaign so far and concluded that Mr. Paul’s rise is fundamentally different from the other surges. Mr. Wilkinson put together this illuminating graph, which nicely sums up much of the Iowa campaign to date (although Mrs. Bachmann’s rise and fall are not included): 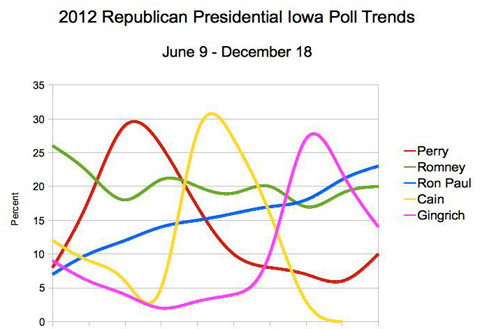 As Mr. Wilkinson pointed out, “A series of candidates enjoyed fleeting seasons of glory, then tanked disastrously. … Mitt Romney’s support dipped slightly as each flavour of the week hastened toward his peak, then he more or less recovered with each precipitous fall. All the while Ron Paul chuffed steadily along, slowly but surely picking up support.”

At The Huffington Post, Robert Naiman sees Mr. Paul’s steadily climbing strength in Iowa as a function of his support among “antiwar Democrats and independents,” pointing to a Public Policy Polling survey as evidence.

CNN’s Ali Velshi presented FiveThirtyEight’s Iowa forecast to Mr. Paul, and he seemed pleased (although that was when his Iowa odds were a bit higher). Even if Mr. Paul actually goes on to win the state, however, he would be a far way from winning the nomination, wrote Amanda Paulson at The Christian Science Monitor. FiveThirtyEight agreed, writing that — in order to really compete for the nomination — Mr. Paul would need the other non-Romney candidates to stay in the race as long as possible.

Finally, our last comment-of-the-half-month of the year goes to yetanotherjohn, one of our more enduring commentators. Yetanotherjohn threw down this unexpected beauty to describe the arduous Iowa caucuses versus the relative ease of voting in New Hampshire’s primary: “If you think of voting like preparing a ham and eggs breakfast, in NH you are the chicken and in Iowa you are the pig contributing to the meal.”

It’s too late now, but for a mere $101,000, you could have bought, for a friend or family member, all the items listed in “The 12 Days of Christmas,” including a partridge in a pear tree. That figure comes from the Christmas Price Index released for the 28th year by PNC Wealth Management. Our colleague Elizabeth Olsen looked at what the index says about the state of the economy.

The Atlantic’s Philip Bump exhibited some mathematical rigor and figured out just how daunting a task Santa has on Christmas night, delivering presents to all the Christian children in the world.

The Atlantic also provided a more utilitarian read: the probability of a white Christmas.

And, here’s a few non-holiday reads.

Sarah Mimms, at National Journal, found that the many complaints from Ron Paul supporters that their candidate is being ignored by the media are not backed up by the data. Indeed, she concludes, “The Ron Paul revolution is being televised.”

At Smart Politics, a blog by the University of Minnesota’s Humphrey School of Public Affairs, Eric Ostermeier crunches the numbers on the G.O.P. debates to find which debate’s moderators inserted themselves most often into the discussion. (The answer: “FOX moderators have averaged a 40 percent larger share of speaking time compared to moderators at the other eight debates since September,” Mr. Ostermeier wrote.)

Mike Konczal, at Rortybomb, asks and answers the question: “What is the Real Unemployment Rate, and How Could We Tell?“