I’ve gotten several e-mails asking me for some sort of cogent analysis on where LeBron James, who will announce the identity of his new employer tomorrow, might decide to devote his services. Unfortunately, I don’t know if this problem is especially amenable to that. 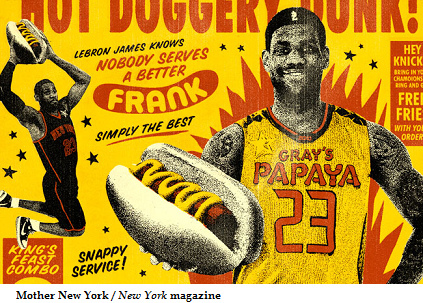 The main issue is that I’m not sure that we really know exactly how good LeBron James is. Obviously, he’s very, very, very good. But we perhaps need to be more precise than that. I’ve identified five different metrics that attempt to quantify the value of a player to his team in terms of regular-season wins, and they don’t particularly agree with one another. Basketball-reference.com’s Win Shares statistic, for instance, figures that James was worth 18.5 wins to the Cavaliers last year; Basketball Prospectus’s Wins Produced number, on the other hand, says he was worth 39.6 wins:

This makes a huge amount of difference. If LeBron is “merely” a 18-win player, then he probably can’t win a championship next year with a team like the Knicks, Nets or Clippers. Take the Knicks, for instance, who won 29 games last year. Even if you assume that Amare Stoudemire is an upgrade over David Lee (probably true, but you can argue the other way), that improvement from Danilo Gallinari will offset the small contributions they had received from the other players they renounced to clear up cap space (debatable), and that they can use LeBron’s coattails to induce a couple of decent veterans, worth a couple of wins apiece, to sign for the league minimum or close to it (not unlikely), then you’re probably talking about a 50- or 55-win team: good enough to make the playoffs, but probably not good enough to win the title unless they get rather lucky. On the other hand, if LeBron is a 30 or a 40 (!) win player, he and Stoudemire alone are the best “team” in the league or close to it, possibly excepting the Lakers and possibly excepting Chicago if both Chris Bosh and Dwayne Wade sign there.

I don’t know nearly enough about fancy basketball statistics to adjudicate between the different methods; taking the average of the numbers above, which would be 28 wins, might be the most prudent idea. But this is an important question for LeBron James’s advisors to have an answer to: exactly how valuable, in basketball terms, is their client?

Even the Knicks’ own marketing materials suggest that the potential to win a championship is the key long-run value driver of the marketing deals that James would be able to pursue (a strange point to make, since it would not seem to favor the Knicks). I don’t doubt that this is true. But it probably also matters how you win that championship. Suppose, for instance, that LeBron were to join the Lakers for the league minimum salary, as Tyler Cowen sarcastically (?) suggests. Unless someone got hurt, the Lakers would be completely unstoppable; they’d go about 75-7 and would almost certainly win the title, as likely as not in a sweep. But would this do much for the LeBron James brand? Probably not; he’d be seen as piggybacking on someone else’s accomplishments.

In contrast, persevering in Cleveland and bringing a championship home would be a terrific story, one that could penetrate into Middle America. Conquering the high expectations associated with the moribund franchise that plays in Madison Square Garden would be a very good story. Winning one for the Bulls would be an okay story; James would become Michael Jordan the Second, which could work both for him and against him in different ways. On the other hand, I don’t know that forming a “dream team” with Wade and Bosh in Miami would do that much for him; it would seem, as would the hypothetical of LeBron joining the Lakers, that he hadn’t overcome that much of a challenge.

Basically, I suspect that LeBron’s best economic decision is based on some function of the actual difficulty of winning a championship relative to the perceived one. I don’t know exactly how you arbitrage that, but it probably depends a great deal on whether LeBron is in fact closer to the 20-win side of the spectrum or the 40-win side. My hunch is that LeBron will either stay in Cleveland or join the Knicks, and that Wade and Bosh will operate as a pair, either in Chicago or Miami.