Once upon a time, a statistical tale was born. It grew and scurried to lands far and wide. The tale claimed that cities were so overrun by rodents that, at any given time, residents would always be within 6 feet of a rat. For city dwellers, that’s an unnerving thought, but is it true? I decided to trace the ratty stat’s origins.

In 1909, W.R. Boelter published a book titled “The Rat Problem.” Boelter toured the English countryside asking, “Is it reasonable to assume that there is one rat per acre?” Respondents had the choice of saying either “certainly” or calling the estimate “absurdly low.” More people said “certainly.” Boelter concluded that there were about 40 million rats, or one for every cultivated acre in the U.K. (and about one for every person living in the U.K. at the time).

Thus the myth of “number of rats = number of people” was born. Somehow, it seems to have morphed into the assumption that, in cities at least, we are never more than 6 feet from a rat (maybe because it’s hard to imagine being more than 6 feet from a human in a city?). In terms of methodology, Boelter’s system was about as robust as chewing your pen to sharpen your pencil.

Forty years later in New York City, David E. Davis attempted to do Boelter one better, trapping rats, as well as counting their burrows, their runways and, perhaps with less gusto, their droppings. He concluded that there was one rat for every 36 people in the Big Apple.

Fast-forward 50 more years, and you’ll reach Robert Sullivan’s endeavors. He headed to Lower Manhattan’s Edens Alley, which was hidden behind several businesses and adorned with just one tree. It was a rat’s paradise. Sullivan camped out with a stool, thermos and night-vision goggles. He did something else smart; he spoke to the experts — exterminators.

How many rats did Sullivan find? Who knows. He was distracted by the rats’ sex lives, awed by the fact that in just a few hours, male rats can mate with 20 females. Sullivan marveled at rats’ voracity, recounting how — misguided by images of Tom and Jerry — homeowners put cats in their basements only to discover the hair and bones of defeated felines. He never recalculated the ratty population.

That reminds me: I need to stay focused on the numbers. Say hello to NYC’s Rat Information Portal. The portal, which includes raw data and an interactive heat map of inspections, is meant as a resource for businesses and residents. And the city’s open-data portal has even more detailed information. Through it, I learned that there were 10,316 registered rat sightings over the past 12 months. And that 39 percent of those had been in accommodations categorized as “3+ Family Apt. Building.” And that rat sightings happen year-round.

Some numbers are impossible to know when you just have one roaming researcher with a clipboard, or even 20 researchers. That’s one reason why the growth of open, crowdsourced statistics is crucial, especially for topics, such as vermin, that raise public health concerns. How many rats call New York or any other big city home? There isn’t a conclusive answer, at least that I could find. Let me know if you have one. 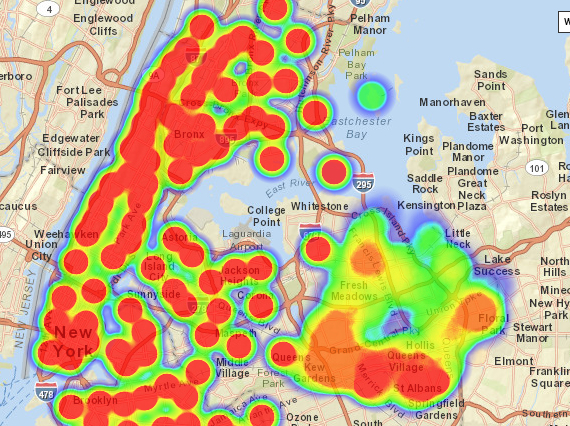 But just for fun, here’s a guess based on the open data: