I owe my editor about 8,000 words by tonight, so I’m not going to be as talkative as usual, but this is fortunately one of those cases where the picture pretty much tells the story. This is what we get if we take all the polls that have been conducted on Obama’s handling of the Gulf of Mexico oil spill and simply draw some basic polynomial regression lines to get a trend. 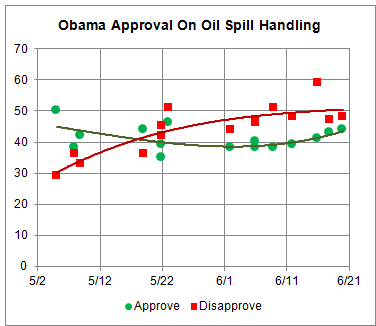 There’s not really been much movement here for the past three weeks or so. One poll actually shows Obama’s numbers improving slightly, although still in the red. But a few probably obvious thoughts.

1) Obama is fortunate that BP has bungled the handling of this as much as it has, and that certain Republicans have played to type.

2) It sometimes seems like whatever question you ask about Obama these days, somewhere between 40 and 50 percent of the country are going you a favorable response, and somewhere between 40 and 50 are going to give you an unfavorable response. The number of swing voters seems to be relatively few, which may suggest that November’s election will be more about turnout than anything else (not necessarily good news for the Democrats.)

3) Although I don’t know that there’s any way for the President to look good from having 60,000 barrels of oil a day spilling into the Gulf of Mexico, one wonders if these numbers wouldn’t be close to reversed (50 percent approving and 45 percent disapproving instead of the other way around) if the Administration hadn’t seemed to downplay or overlook the magnitude of the disaster in the first 20 days or so. That does seem to be a pattern with this White House: they’re a little passive at first, on issues ranging from the stimulus to the oil spill to health care, and are always running somewhat from behind.

4) In terms of their overall political trajectory, one of the biggest negatives for the Democrats may be that this issue (appropriately, to some degree) drowns out any other political conversation and makes it hard for them to get traction on anything else. On the other hand, considering that the economic indicators have contained more negative than positive “surprises” lately, and that with one or two partial exceptions, Democrats haven’t really figured out a way to steer legislation through the Congress without costing it 10 points’ worth of popularity, maybe that’s just as well.

5) Needless to say, all bets are off if the oil is still spilling after Labor Day.