Please join me in saying a big thank you to our guest contributors, Robert Frank, Ed Kilgore and Tom Schaller, as well as our regulars, Andrew Gelman, Joshua Grossman, Renard Sexton, who did an outstanding job of maintaining FiveThirtyEight.com in my absence. Although I’ll begin writing regularly again as of tomorrow, I also hope to turn one or more of our guests into regular contributors, and generally to increase the volume and diversity of the content you’ll see here on a daily basis.

In the meantime, for those who feel like indulging me, a few observations from my trip to London and Paris.

Although I spent a year in London studying at the LSE from 1998-99, this was the first time I’ve left the country since 2001, and for some reason the differences between the United States and Europe were more striking to me now, as a “mature” adult, then they were when I was a student.

* London has changed quite a bit since I lived there 10 years ago; in particular, there’s been a lot of new construction, and the city is notably more diverse. Also, the East End, which until quite recently was parodied as working-class and somewhat derelict, has predictably now become trendy and rather posh.

* London, and the United Kingdom in general, has sort of become ground zero for what is known as libertarian paternalism, with all sorts of subtle nudges to influence behavior. For instance, cigarette packs now contain not only the phrase ‘smoking kills’ in prominent letters on the front side of the package, but also, a disgusting picture of rotted teeth on the backside (a practice which is somewhat reminiscent of an American PsyOps operation in Afghanistan). There is now a commuter tax to drive into the city. Tube maps contain firmly-worded admonishments to riders, advising them to avoid changing trains at busy stops like Covent Garden or Bank. Black cabs feature doors that lock and unlock automatically as the car begins to accelerate. The amount of liquor in a cocktail is strictly regulated (although this was true when I was there as well). Overall, one is generally more aware of the presence of government than one is in the United States, even though they have several freedoms over there (broader tolerance for things like gambling and gay marriage for instnace) that we don’t have over here.

* The advertising in London, although just as intrusive and abundant as in New York (some Underground stations now feature video display panels on the escalator corridors), is always very interesting, seeming to cater to an extremely savvy, jaded, almost post-consumerist consumer. See some representative examples here, here, and here. 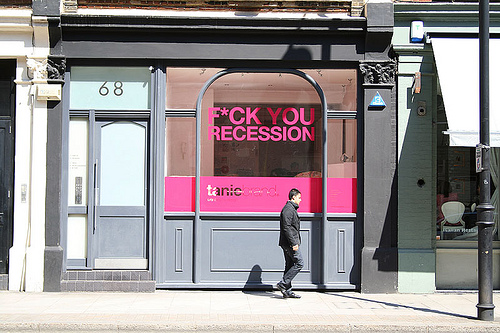 * Credit cards in both the UK and France now almost universally feature a smart chip, which require the consumer to key in a four-digit PIN before a credit card charge is approved. This can occasionally be a problem for Americans, as I encountered one or two merchants in London (although none in Paris) who were reluctant to accept my regular old U-S-of-A Visa. However, in other ways the use of credit cards is a breeze in Europe — in restaurants, for instance, the waiters walk around with hand-held terminals and can process your charge more or less instantaneously, which at a busy restaurant can easily save you 5-10 minutes of waiting time at the end of your meal.

* Cellphones are fully functional in the Paris Métro — or at least mine was! In spite of this, I observed only a couple of Parisians actually using them to make phone calls whilst underground, and when they did so they tended to do so very discretely. I’m not sure if this would work in, say, Manhattan, a faster-paced, higher-octane city where cellphone users (yours truly included) seem to have the insatiable urge to talk at higher-than-usual volumes and to draw attention to themselves. Still, it’s probably only a matter of time before this practice makes its way over here. Perhaps the MTA will follow the lead of Amtrak, which designates certain trains as ‘quiet cars’, or perhaps they’ll figure out some way to allow you to send e-mails and text messages but not actually talk on your phone.

* The leisurely lifestyle of Paris, lovely as it is for someone on vacation, has a tendency to dictate itself to you whether you like it or not. The Parisians get a late start on their days and a somewhat early finish; although mealtimes are late (9 PM might be the peak time to have dinner), the whole city is seems to have gone to bed by 1:15 AM or so, as once the sidewalk cafes close there is very little nightlife outside of tourist traps and ambisexual Eurotrash clubs. Restaurants and cultural instituitons are at risk of being closed on Sundays, Mondays, Tuesdays, any of a dozen or so Catholic holidays, and the entire month of August. Not surprisingly, the French spend more time eating and sleeping than any other industrialized people. They also drink more than almost all of them, although paradoxically there is very little public drunkenness, perhaps because alcohol is almost always consumed with food.

* Paris is also extremely unusual for its lack of a central business district; as most large businesses are instead confined to the outer reaches of the city. At 3 PM on a weekday in Central Paris, I’d guess that only about 1 in 20 Parisian men you might pass on the sidewalk is wearing a suit; the comparable number in Lower Manhattan or the West End of London must be something like 1 in 4.

* The food in Paris was, per its reputation, consistently very good, but I don’t think I’d trade it for the cuisine in New York, as there tend to be few appealing options outside of traditional French fare. Although we had one very good Vietnamese meal and a ridiculously delicious kebab from a Lebanese street vendor, the French on the whole don’t really seem to have developed an affinity for ‘ethnic’ food, which is what makes eating so terrific in New York, Chicago, Los Angeles or San Francisco so terrific.

* I did not find Paris particularly snobbish or anti-American, although I was probably helped by the fact that my expectations have been lowered by living in New York, and that one of my traveling companions grew up in Montreal and speaks fluent French (although with a Québécois accent). There was one notable exception: a restaurant we went to early in the week sat is in a small, somewhat spartan room in the corner of the restaurant, along with three other couples who just so happened to speak English. Perhaps they thought they were doing us a favor, but it was extremely unusual and off-putting, as a white American, to have the experience of feeling ‘ghettoized’.

* Although there were generally not many outward signs of international politics, there is a certain amount of Obama bling to be found in Paris, as well as various iterations of phrases like Yes Oui Can!