I caught the following ad here on this website and a couple of others: 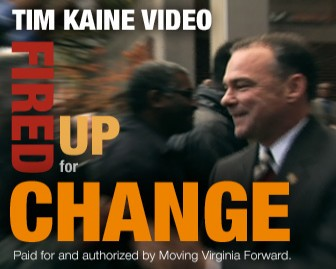 That’s a little weird. Kaine’s not up for re-election this year — and he won’t be up for re-election in 2010 since Virginia governors cannot serve more than one consecutive term. In fact, Kaine would seem to be one of the more star-crossed politicians around. Once Mark Warner wins his race and joins Jim Webb in the Senate, the earliest Kaine could plausibly run for that office would be … 2018, assuming that Webb had been defeated in 2012 (of course, Webb might also have Presidential ambitions that year). Kaine could also run for governor again in 2014, although just one Virginia governor since Reconstruction has ever pulled a Cleveland. Or he could run for the House, but it’s fairly unorthodox for an ex-Governor to do so.

The point is, if Kaine has long-term political aspirations and doesn’t want a big gap in his resume, it behooves him to hitch his star to Barack Obama and hope for a job in his administration: that and Chairman of the DNC would seem to be the only reasonably high-profile jobs available to him between 2010 and at least 2014.

One of those cabinet jobs, of course, is that of the Vice President; Kaine presently ranks fifth in the Intrade Democratic Veepstakes, behind only Kathleen Sebelius, Evan Bayh, Joe Biden, and Hillary Clinton. “FIRED UP FOR CHANGE”? It practically seems like he’s campaigning for the position, as the ad feels like one of those Heisman Trophy PR kits.

Of all the prospective Democratic VP nominees, Kaine may have the fewest obvious drawbacks. The only problem is that he isn’t all that popular in the state he is supposed to help Barack Obama to carry — Virginia. In a Rasmussen poll conducted last week, 50 percent of Virginian likely voters rated Kaine’s performance as “fair” or “poor”, as opposed to 48 percent who rated it “good” or “excellent”. And his numbers were even worse among independent voters: 58 percent “fair” or “poor” against 37 percent “good” or “excellent”. A major turning point was the end of the Virginia General Assembly session earlier this month, which ended in gridlock as the Assembly failed to pass a significant roadway funding bill and to fill vacancies on the Virginia Supreme Court.

I don’t mean to throw the guy under the bus; he’s a good public servant and might be second in line behind John Edwards for the Attorney General position (or maybe first, if the Drudge Report gossip about Edwards is true). But if Obama picks Kaine to be his VP, it should be for reasons other than his ability to carry Virginia.