South Africa may have become the first World Cup host not to qualify for the second round, but that hasn’t stopped South Africans of all races from celebrating Bafana Bafana. The 2010 Cup has been promoted as the Rainbow Nation’s coming-out party on the world stage. If the 1995 Rugby World Cup–when Nelson Mandela famously donned the Springboks’ jersey–was a moment of post-Apartheid reconciliation, this was the time for a transformed, multiracial South Africa to showcase its achievements.

Traditionally, soccer has been the sport of Black South Africans, with rugby preferred by Whites and Coloureds. (And sport, like everything else, was obsessively racialized under the Apartheid regime.) Even today, despite sixteen years of democracy and numerous integration initiatives, Bafana are overwhelmingly Black and the Springboks overwhelmingly White.

Black and White South Africans’ lingering sportive differences mirror electoral differences. South Africa has had four National Assembly elections since the arrival of “one person, one vote” in 1994. In each of them, the African National Congress (ANC)–the party of Madiba and liberation–has won with over 60% of the vote. As South Africa’s president is elected by the National Assembly, the majority party controls both the executive and legislative branches.

This does not prevent debate and dissent, however. President Thabo Mbeki faced a great deal of intra-party resistance to his HIV/AIDS policies, and lost the ANC leadership contest to Jacob Zuma in 2007. In September 2008, the ANC leadership ousted Mbeki as president six months before his term ended. Kgalema Motlanthe took over as a caretaker president until the April 2009 election, which Zuma won.

My colleague Daniel Berman described the electoral mechanisms that kept the National Party (NP) in power during the Apartheid years. The ANC requires nothing so complicated: a system of proportional representation and an electorate that remains overwhelmingly loyal are enough. But while the ANC is the preference of Black South Africans (79% of the national population), it receives paltry support among Whites (9.6%). Coloured (8.9%) and Asian/Indian (2.5%) voters are the “swing” demographics that determine how big the ANC’s majority is.

In the 2009 election, the top three parties were the ANC, the Democratic Alliance (DA), and the Congress of the People (COPE). The DA, headed by former Cape Town Mayor Helen Zille, is a centrist, good-government coalition that is still largely perceived as the “White party.” COPE was formed by Mbeki-loyalists who splintered from the ANC. While COPE was initially anticipated to be a serious challenger to the ANC, it ended up taking less than 10% of the vote. 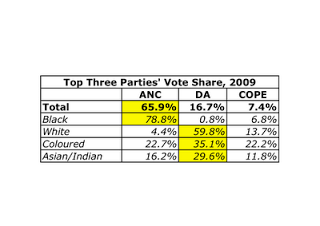 The racial breakdown listed comes from a March 2009 poll and is subject to the caveats of all pre-election polls. (South Africa does not have the extensive, demographic-based exit polling of the US.) Still, it paints a heavily polarized picture: less than five percent of Whites intended to vote ANC, while a trivial number of Blacks supported the DA. The numbers among Coloured and Asian voters are more mixed. Indeed, it was largely due to a poor showing among Coloureds that the ANC lost the two-thirds supermajority necessary to make constitutional changes.

When South Africans elect the National Assembly, they simultaneously elect the legislatures of each of their nine provinces. The ANC has continuously controlled the provincial legislatures of all but two: KwaZulu-Natal and the Western Cape. The latter, home to Cape Town, is one of only two provinces without a Black majority. (Coloureds constitute a slight majority.) It continued to support the National Party in the 1994 election, and has recently emerged as the DA’s stronghold. In KwaZulu-Natal, the Zulu-nationalist Inkatha Freedom Party (IFP) won the 1994 and 1999 elections. Since Zuma, a Zulu, became leader of the ANC, the IFP’s support has waned. By contrast, Gauteng–the largest province and home to Johannesburg–votes similarly to the country as a whole. 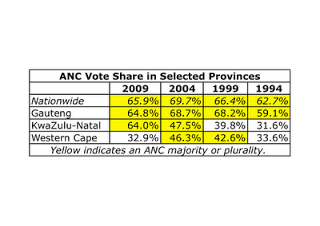 While the DA is now a moderately strong opposition, the ANC is likely to govern South Africa for a long time–though maybe not until Jesus comes. As long as memories of Apartheid remain personal, the Black majority will continue to vote for the party that gave it the right to have rights. Fortunately for South Africa, the ANC is a multiracial, broad-spectrum coalition that incorporates a great deal of internal dissent. (Witness the Mbeki-Zuma schism.) ANC politicians have diverse views on issues of free trade, social equality, crime, development, public health and foreign relations. And while the ANC has been plagued by corruption, its internal factions give it the ability to correct itself. This capacity for self-correction, combined with a free press and strong institutions, keeps South African democracy secure.

But for all its institutional security and stability, South Africa has been a one-party state since 1948. (With a shift from NP hegemony to ANC in 1994.) South Africa has never experienced something other democracies take for granted: a change in governing party through a free and fair election. When that happens, South Africa will have experienced a transformation worth a hundred World Cups.