PARIS — Rafael Nadal, the greatest men’s clay-court tennis player of all time, is struggling on clay. He’d be the first to tell you. He told me, at least, when I asked him about his level of play at a news conference in Paris on Friday, two days before the start of the French Open, the season’s biggest clay-court tournament. “It’s not terrible, but if we compare with other years, obviously looks bad, no?” he said, adding, “Obviously when you lose more than other years it’s obvious the confidence is a little bit less.”

But for Nadal, winning 77 percent of matches on clay is poor. That’s his lowest single-year percentage at tour level1 since his first full year on tour, 2004, the year he turned 18. In seven of Nadal’s last 11 years on tour, he won at least 95 percent of his clay-court matches, including two years in which he went undefeated on the crushed brick. Nadal has been great on all surfaces. On clay, which favors his sliding defense and his forehand’s explosive topspin, Nadal has been nearly unbeatable — until this year, when he has been down 29 percent from his peak, unbeatable level. That has dropped him to the sixth seed in the French, which begins Sunday.

Winning percentage, however, is a rather rough way to measure how good a player is because it doesn’t take into account margin of victory. Take, for instance, the two years in which Nadal went undefeated on clay, 2006 and 2010. In 2006, he lost 10 sets on clay in 26 matches. In 2010, he lost just two sets on clay in 22 matches.

Winning percentage in sets could help, but even that has pitfalls: A 7-6 set won in a tiebreaker is very different from a 6-0 whitewash.

There’s a catch-all stat I came up with a few years ago to try to capture the level of dominance in a match. I called it dominance ratio, or DR. DR is the ratio of a player’s winning percentage on points when he’s returning serve to the opponent’s return-point winning percentage. The principle behind it is to break down a win in tennis into its building blocks. To win a completed match, you have to win more sets than your opponent. To win a set, you have to either break serve more often than your opponent, or break serve the same number of times and then win more return points in the tiebreaker. And to give yourself the best chance of doing that, it helps to win more return points than your opponent.

DR paints a similar picture of Nadal’s decline as winning percentage does, with some differences in the margins. It shows that he was much better on clay in 2010 than 2006, and that he peaked in 2012, when he lost just three sets on clay.2 DR also is less pessimistic about Nadal’s decline: It finds he is down just 17 percent from his peak level. That’s sensible, considering that three of his losses were by narrow margins.

But we ought to add one more piece to this analysis: the quality of Nadal’s opponents. Four of his clay losses this year came to players he used to dominate on the surface. Before this year he had won all 13 matches he played on clay against Fabio Fognini, Andy Murray and Stan Wawrinka, losing just two sets. This year, Nadal has lost all four matches against those three players on clay, winning just one set.

Controlling for quality of opponent isn’t simple. Tennis has nothing like Sports Reference’s Simple Rating System, a widely accepted measure in several team sports.3 Without a simple rating, I went for something more complex.4 Nadal has faced 66 different opponents at least twice on clay in tour-level matches for which we have his DR in the match.5 If we assume each opponent is playing at the same level each time he plays Nadal,6 then we can use Nadal’s differing results against the same guy in different years to estimate the peaks and valleys of his game.

I ran a regression on his results, controlling for whom he played in each match, to see how his level varied by year.7 What it showed is that he was at his best in 2010, 2012 and 2013, with a steep dropoff last year and a continued decline this year. He is 20 percent worse now than he was at his best, by this measure. 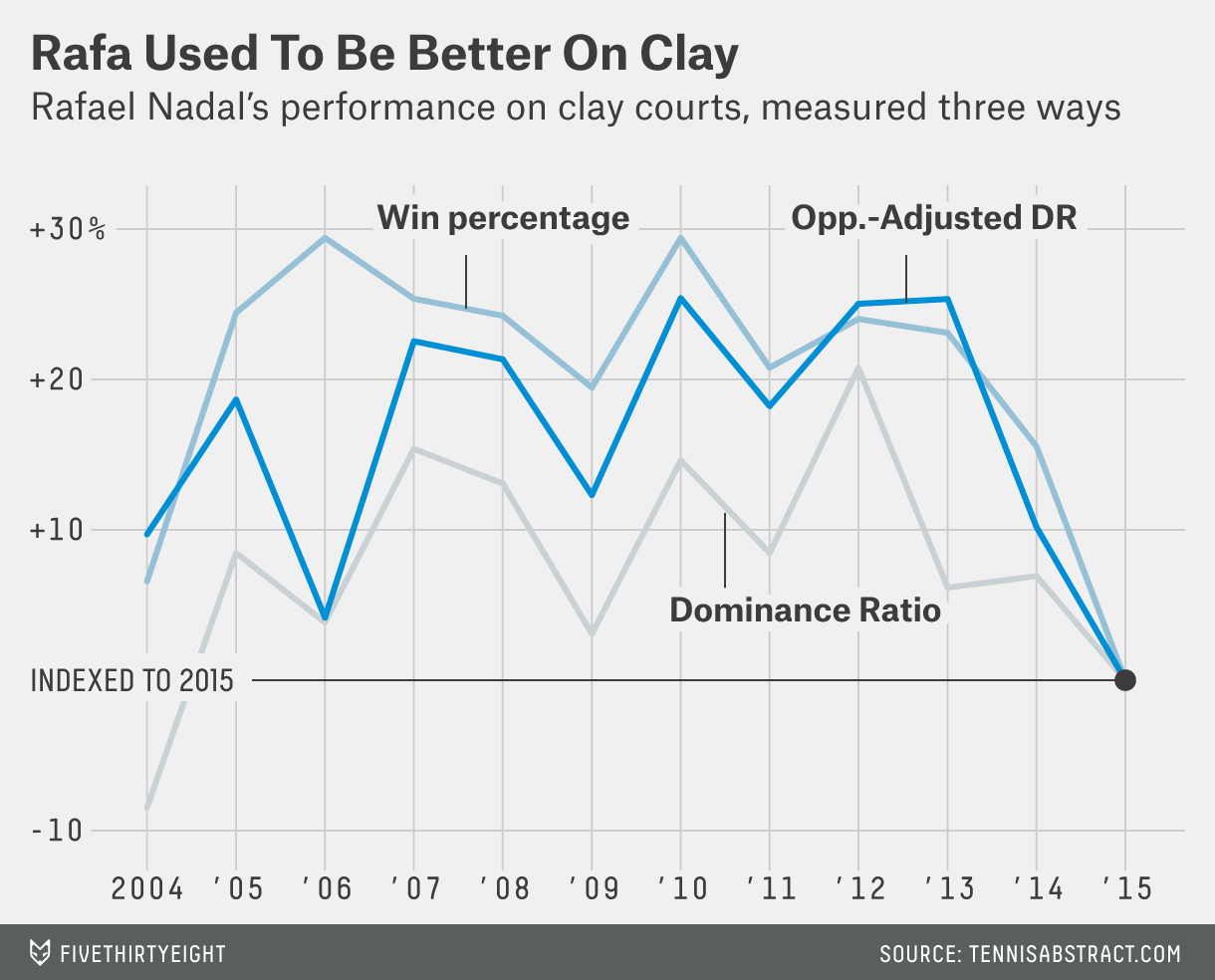 Each method tells a similar but slightly different story: Nadal is somewhere between 17 percent and 29 percent worse than he was at his best, a level he was at or near in 2012.

That’s still more than good enough to beat almost anyone on clay; Nadal looked just fine in practice sessions against Richard Gasquet and Donald Young on Friday. And Nadal is especially formidable at the French Open, which he has won nine of the 10 times he has played it. But to win the tournament, he’ll likely have to beat No. 1 Novak Djokovic in the quarterfinals, thanks to the tough draw Nadal got when it was released Friday.

Djokovic doesn’t have enough clay matches to do the same regression analysis we did for Nadal. But based on his winning percentage and DR this year, Djokovic is playing at a career-high level on clay. Nadal’s decline since 2012 suggests that a match with the 2012 Djokovic would be a tossup, despite Nadal’s DR of 1.25 against him in 2012. The much-improved Djokovic of 2015 who Nadal might have to face this year would be the big favorite.

Murray warned against counting Nadal out when I asked him Friday. “I think Novak for me goes into a tournament as the favorite now, but on that court Rafa is — his record is ridiculous,” Murray said. He added, “It would be stupid to write him off or suggest that he can’t win the event or won’t win the event.”

Nadal can win his 10th French Open next month. But if he keeps playing like he has been, he probably won’t.