There’s really not a lot to look at in the new Quinnipiac poll of the Democratic primary in Pennsylvania. Clinton leads Obama 50-44; those are the exact same numbers in a release Quinnipiac put out last week. The Quinnipiac surveys have exceptionally large samples, which lend themselves to more robust analysis of demographics than we might be able to achieve otherwise. However, those demographics themselves aren’t very revealing. Obama lost 2 points among whites, but gained 17 points among black voters. He lost 1 point among women, but gained 4 points among men. He gained 2 points among whites making $50,000 or less, and lost 1 among whites without a college degree.

What has changed a little bit is the relative support for the two democrats by region: 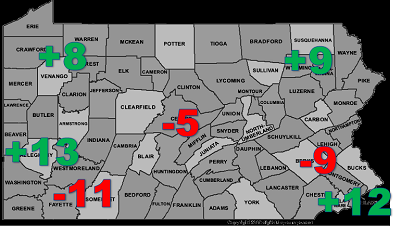 NOTE: THIS IS THE CHANGE IN OBAMA’s SUPPORT IN EACH REGION, NOT THE LEVEL OF SUPPORT ITSELF.

That’s not much on which to stake a claim on there that ‘bittergate’ is hurting Obama among working class Pennsylvanians; if anything the trendlines are slightly favorable for him in industrial towns like Erie and Scranton. It may be hurting him in the ‘burbs, however, while helping in the cities.

Also interesting: Clinton leads by just two points (49-47) among voters who are choosing their candidate on “shares values”; that’s actually down from last week, when she led that category by a 51-42 margin. Obama did lose ground on “trust”, however. It may be that bittergate ultimately goes to making Obama look political (telling Pennsylvania voters one thing and San Franciscans another), but not so much “out of touch”.

EDIT: SurveyUSA also has a new poll out, which shows Clinton ahead of Obama by 14. That’s actually an improvement for Obama from the previous SurveyUSA survey, which showed Obama trailing by 18; however I would not really point to a favorable trendline since the 18-pointer looked like an outlier. The SurveyUSA poll also has somewhat different regional and demographic findings:

However, the contest remains tight in Southeast Pennsylvania, which includes Philadelphia.

In the Pittsburgh and Johnstown areas, Clinton gained ground, while Obama picked up support in the Harrisburg area.

EDIT #3: Finally, Rasmussen has a new poll out, showing Hillary with a 9 point lead over Obama in Pennsylvania — that’s a slight improvement from her 5-point margin last week. Meanwhile, however, Obama has opened up a 9 point lead in their national tracking poll.

If we look at all Democratic primary polls that surveyed both pre- and post- the controversy, we get the following: