When the then-opposition Democratic Party of Japan (DPJ) was swept into power in August’s re-aligning election, the storyline largely followed the rise and fall of the long-dominant Liberal Democratic Party.

While the news lasted only briefly in the mainstream media, it was clear that the political infrastructure in Japan had begun tto internalize the changes that have occured in domestic and foreign relations over the last twenty-five years.

Initial reports were that the US-Japan link would largely stay the same, with incoming Prime Minister Yukio Hatoyama reaffirming that the US relationship remained the “cornerstone” of Japanese foreign policy. However, after a campaign where change from the status quo — and it does not get much more “status quo” than 60 years of almost one party rule — was to be the main thrust of the new government, it was clear that the cornerstone was going to have to flex.

If the US-Japan relationship was largely military focused at the end of World War II, continuing with the “Status of Forces Agreement” signed in 1960, by the 1980s a increasingly close trade relationship held the two countries together. Recent years have seen a bit of a change.

After a surge in trade from the mid eighties to the early 2000s, a big shift has occurred in the new millenium. Trade with China has rapidly outstripped any other trade partner, with China overtaking the US as Japan’s biggest trading partner in 2008. 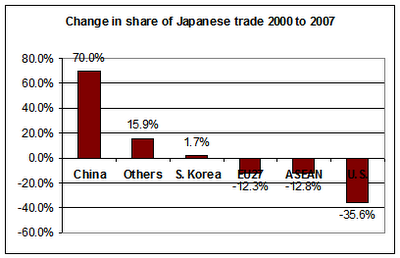 Trade with the US has taken the biggest hit, dropping from 25 percent to just 16, as has trade with European countries. At the same time, the Japanese trade advantage, while it has increased in nominal dollar terms (not adjusted for inflation), has stabilized in proportional terms. This means that while sales of Japanese export products are likely to remain strong and trade remaining a net benefit for the Japanese economy (quite reliant on trade surplus), additional markets will have to found elsewhere for major growth. 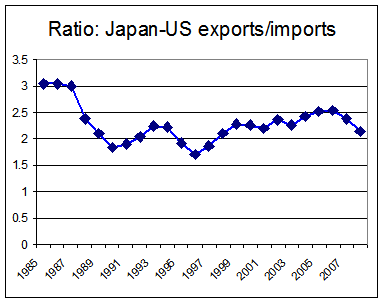 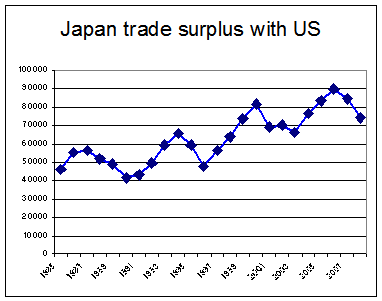 Two events have been the public face of the shift, the first being the new DPJ government’s refusal to continue refueling runs in the Indian Ocean for NATO forces fighting in Afghanistan. While the U.S. has publicly downplayed any shift, pressure is also building for a fundamental re-boot of the Status of Forces Agreement that has placed two big U.S. military bases in the country for decades. While a withdrawal of US forces is unlikely in the short term, it is certain that some changes, beginning with symbolic gestures, are on the horizon.

At the same time, the East Asian Community, an anticipated economic and political arena that mixes China, India, and the ASEAN countries with Japan, Australia and New Zealand, is developing slowly but surely.

The U.S. will certainly have a seat at the table of the new economic area as a preferred and influential observer. In addition, economic integration and military cooperation with Japan will continue at a high speed. But, regional and international relationships for Japan, which have long been dominated by the specter of World War II — whether with the US, South Korea, China or otherwise — are beginning to take a new shape, one that reflects the changing power landscape in economic and military geopolitics.
—
Renard Sexton is FiveThirtyEight’s international columnist and is based in Geneva, Switzerland. He can be contacted at sexton538@gmail.com