People have long criticized the process electing the US President, where a candidate that receives the most popular votes can lose, and the incentives for geographic campaigning and representation are quite skewed. While some have called the debate impractical, the 2000 results proved that the issue was far from academic. Nonetheless, the Electoral College system, while threatened by alternative state-based measures, remains the law of the land.

In Germany, where the recent Federal election ushered in a centre-right majority, proportional voting at the Federal level is protected in the country’s Basic Law (effectively, the constitution). In fact, the parliamentary voting system is designed to both to ensure proportional power of parties (and therefore the chancellorship and ministries) as well as including districts where members of parliament are directly responsible to their constituents.

As such, in theory, the Chancellor should always be selected from a party or coalition that has received the majority of the votes. For example, the parties of the grand coalition that has governed until the present earned a combined 69.4 percent of the national vote in 2005. The CDU/CSU, having a slightly larger share, was allowed to name the head of government.

In 2009, however, the clash between district-based seats and the overall popular vote (done by party list) resulted in a significant shift in the allocation of Bundestag seats — almost enough to change the result. 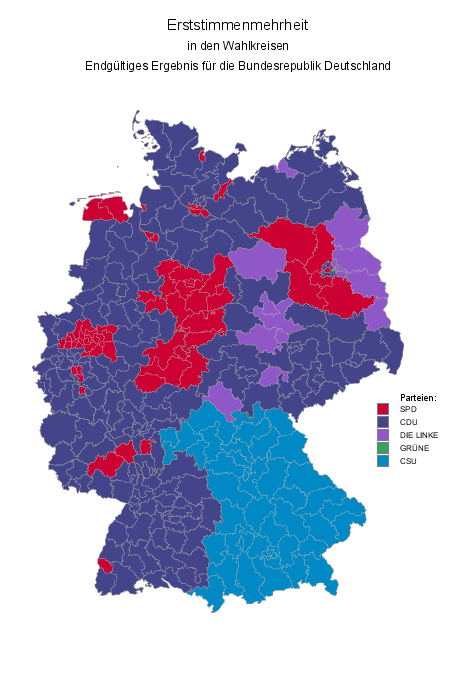 In constituency voting, shown above (from then official, provisional returns), the CDU and CSU absolute crushed all other parties at the district level. Of the 299 district seats in the Bundestag, the Christian Democrats picked up 173, while the CSU won every seat in Bavaria, for a total of 218 of the 299, or 73 percent. The Social Democrats won just 64 seats — a mere 21 percent. The Free Democrats, who will join the new government, won not a single seat, while the Greens and The Left won 17 seats between them.

However, in terms of national popular vote — tallied and allocated at the State level — the results are much less impressive for the center-right. 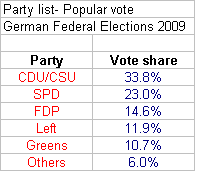 The CDU/CSU plus FDP partnership pulled only 48.4 percent of the national vote, which by Basic Law regulations, entitles them to just 48.4 of the total seats in the final Bundestag – which ostensibly should have 598 members.

Theoretically, at this point the 299 party list members of the Parliament should be allocated to give the appropriate proportionality in the final accounting: With the CSU/CDU due 33.8 percent of the 598 (202 member) they should get enough additional seats to get up to that margin, while the SPD needs to be “topped-up” to 137 seats.

However, CDU/CSU have already earned 218 seats from the district voting and the system, of course, does not allow for seats to be taken away from a member who won the district (or forcing him or her to change party). Therefore, additional “overhang” seats are added to the parliament, in this case raising the total number of Bundestag members to 622 (24 overhang seats).

To add an extra wrinkle, party list seats (based on the popular vote) are allocated at the State level, rather than nationally. So in Bavaria, for example, the CSU won every constituency by plurality earning 45 seats, the popular vote entitled then to just 42.6 percent of the 90 seats (38 seats), meaning 7 overhang seats are required.

Overhang seats in hand, the CSU/CDU earned 239 seats of the 622 total, or 38.4 percent of the parliament (over-performing their popular vote count by nearly 5 points), while the Free Democrats pulled their proportional 93 seats (15 percent of the total), all earned from the party lists. While the popular vote should have kept the coalition below the 50 percent majority line, except the Black and Yellow coalition walked away with more than 53 percent of the seats and a comfortable majority*.

This will likely be the last time this happens, however. In 2008, the top court in Germany ordered that the system be repaired such that proportionality is restored. The Bundestag has until 2011 (two years before the next Federal Election) to get it sorted out.

Conversely, in the US, “overhang votes” for President — where winning constituencies (states) is rewarded rather than winning popular votes nationally — do not seem likely to be dealt with in the near future.

In the German case, it seems certain that Angela Merkel would have retained her post as Chancellor with or without the overhang situation. However, without those extra seats she would have had a sliver thin margin – possibly moving the government towards the center. While no-one will ever accuse her of “stealing” the election, as was widely said following the 2000 results in the US, it’s clear that she got a powerful advantage.

—
*Update: A small, but important element was neglected in the first drafting of this article. In the party list allocation, parties that receive less than 5 percent of the vote are disqualified from receiving any proportional seats. (6 percent of the vote fell into this category, including the NPD and Pirate party). This meant that the original article overestimated the impact of the overhang seats. In fact, they were not needed for the CDU/CSU plus FDP majority.
—
Renard Sexton is FiveThirtyEight’s international columnist and is based in Geneva, Switzerland. He can be contacted at sexton538@gmail.com