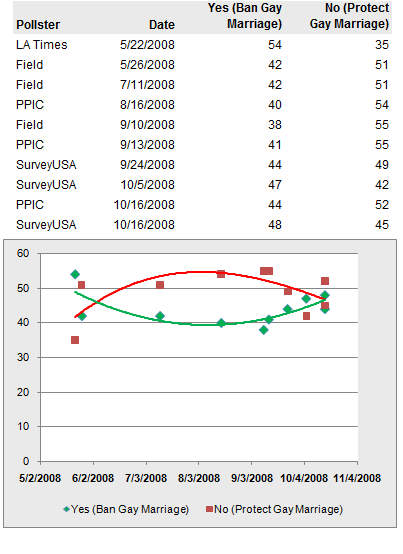 Both the PPIC and SurveyUSA polls have Barack Obama leading by large (20+ point) margins, so I’m not sure that opponents of the measure can count on some sort of turnout surge above and beyond what is already reflected in the polls. There are evidently fair numbers of Obama/’Yes on 8′ tickets, especially among the state’s black and Latino populations.

Ballot measures are notoriously hard to poll, so we really have no idea where this thing is at, although it seems fair to say that it’s chances of passing — after a heavy advertising campaign by the Yes on 8 people — are better than they were a couple of months ago.

There are also a couple of X-factors to keep in mind:

On the one hand, there have been suggestions that there is something of ‘Bradley Effect’ on polling on gay marriage bans, and that such measures tend to overperform their polls, although a more recent analysis refutes this suggestion.

On the other hand, because ballot measures are confusing, it is usually better to be on the ‘No’ side of them … people tend to vote ‘no’ on things that they don’t understand. In this case, that gives an advantage to the marriage equality folks. (It may even be the case that some voters vote ‘no’, thinking that they’re voting no to gay marriage, when in fact the wording of the resolution is such that a ‘no’ vote protects gay marriage).