This is the percentage of articles in Yahoo! News that when containing the word “stimulus”, also contain the word “pork”, broken down for each of the 16 days since Barack Obama took office: 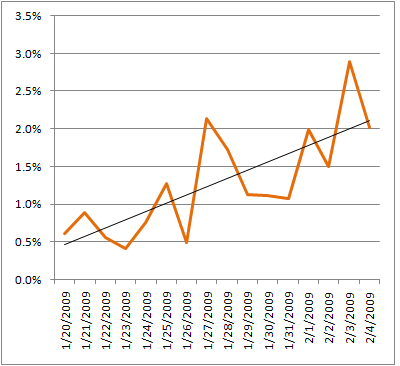 The unflattering term “pork” is now being used about four times more commonly in connection with the stimulus as it was two weeks ago — even though the underlying package has not substantially changed. This is what it means to lose control of a debate. Back during the halcyon days of the campaign , Barack Obama had the good fortune to go against two opponents in John McCain and Hillary Clinton who had, respectively, no media strategy at all, and a completely incompetent one. The Congressional Republicans, on the other hand, are fairly good at making lemons out of lemonade. As Paul Krugman notes, the Obama communications team belatedly seems to have realized this, so call it a “teachable moment” if you like. But as difficult as a two-year campaign was, governance is going to be much, much tougher.