The House today held an entirely symbolic vote on whether to extend to the Obama administration the second half of the $700 billion authorized for the Troubled Assets Relief Program (TARP), better known as the financial sector bailout. By a 270-155 majority, the House voted to block the second half of the bailout funds from being released. As I mentioned, however, this was entirely a symbolic gestures: both chambers of Congress would have had to vote to block the bailout to prevent its continuance, and with the Senate already having voted to extend the bailout, whatever the House did was irrelevant.

Nevertheless, the vote may be interesting from the standpoint of figuring out where the different coalitions in the Congress stood. There is a notion, which I think is a misguided notion, that the proper “progressive” stance is to oppose the bailout. Occasionally, you’ll come across an issue that splits the political spectrum literally down the middle, with the most progressive members and the most conservative members of the House uniting on one direction on a measure, and moderates in both parties taking the other stance. Is the bailout one such issue?

No, it isn’t. On the contrary, this was a fairly conventional vote in which the more a Congressman tends to define themselves as liberal or progressive, the more likely they were to vote to extend the bailout. The Congressional Progressive Caucus voted in favor of continuing the bailout by a 49-15 margin; by contrast, the more conservative Blue Dog Democratic Caucus voted 27-17 to block the bailout. And nearly every Republican voted against the bailout. 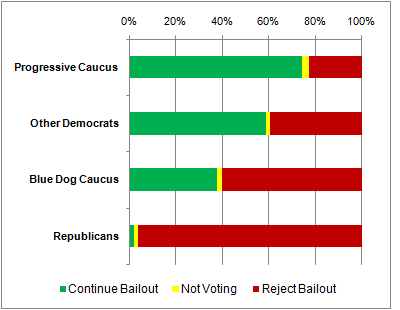 Now, clearly there is room for some difference of opinion here; some progressive Democrats voted to block the bailout, and some conservative ones voted to extend it. Fundamentally, however, the bailout represents a decision to use taxpayer dollars to reinforce infrastructure — and that is generally speaking the “progressive” position. In this case, the infrastructure was financial rather than physical, and private rather than public. There is, nevertheless, a strong case that the bailout was and remains a necessary evil, and credit markets are one of the few economic indicators that have actually improved. That is not to suggest that there isn’t an economic case to be made against the bailout; but beware ideologues (be they Democrats or Republicans) willing to cut off the economy’s nose to spite its face.