Last year, the women’s college basketball season culminated with a final between two undefeated teams. This year, the tournament will have at least one undefeated team: Princeton, which finished its regular season 30-0 with a 55-42 win over Penn on Tuesday.

Unlike UConn and Notre Dame last season, which were the clear top-two teams entering the tournament, Princeton won’t even be favored to advance from its region. None of its wins came against teams now ranked in the Top 25. Its conference schedule was a breeze: Penn was the only other Ivy League team with a winning conference record, and just Cornell joined Princeton and Penn with a winning overall record.

Princeton’s nonconference schedule wasn’t all that hard, either. After Tuesday’s regular-season finale, senior guard Blake Dietrick said she started thinking 30-0 was possible when the Tigers beat Michigan by 30 in Ann Arbor. Dietrick called the December game “a monumental win for us against a nonconference team.” But Michigan finished 16-14, with a losing record in the Big Ten. Princeton is ranked 13th in the country, behind five teams with five or more losses.

Princeton is more similar historically to three undefeated teams in the 1990s that were seeded No. 8 or worse and lost in the first round: Vermont in 1992 and 1993, and 1998 Liberty, which was knocked out by fellow undefeated team Tennessee. But Princeton will probably do better than those three teams did — it likely will be ranked higher in the final pre-tournament AP poll, and it has a greater margin of victory.

Finishing in first isn’t the highest-priority goal for Princeton, which mainly wants to become the first Ivy League team since Harvard to win a game in the tournament. “That is No. 1 on our list right now, second is finishing my thesis,” Dietrick said. “It’s the thing I want to do most in the world, most in my life.”

Below is each undefeated women team’s record, ranking and seed entering the NCAA tournament, along with how it finished, courtesy of ESPN Stats & Info: 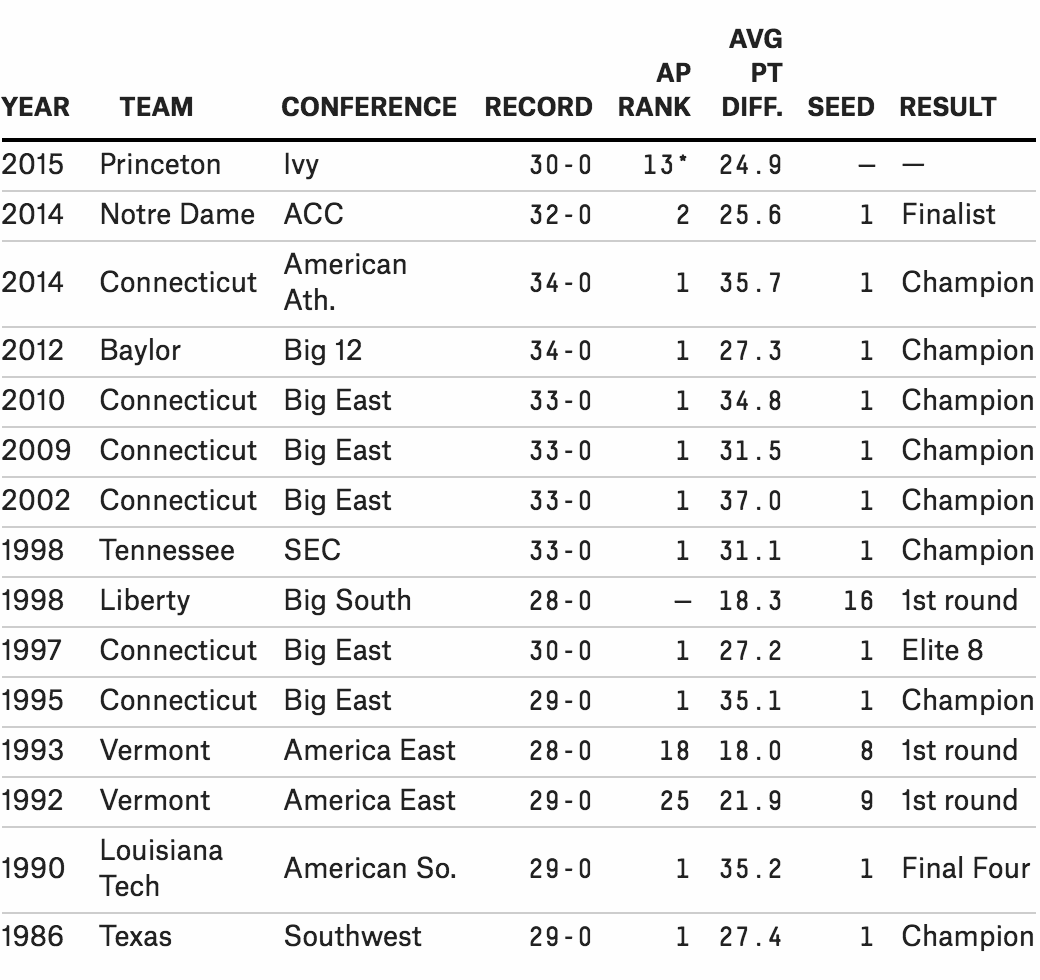