The U.S. Supreme Court hears about 80 cases each year — and a guessing game is attached to nearly every one. The issues have ranged widely — from the constitutionality of the Affordable Care Act to whether a fish is a tangible object. Court watchers usually analyze and predict how the justices will vote by reading the tea leaves — dissecting precedent, legal briefs and oral arguments. But floating in those leaves is also some hard data.

On Wednesday, the court hears oral arguments in the case Equal Employment Opportunity Commission v. Abercrombie & Fitch. This is our quantified look — what we’re calling “Priors and Precedent” — at what may come of the case. But first, some background.

In 2008, 17-year-old Samantha Elauf applied for a job at an Abercrombie Kids store at the Woodland Hills Mall in Tulsa, Oklahoma. She interviewed for a position — what Abercrombie & Fitch calls a “model” — on the sales floor. Elauf, a Muslim woman, wore a hijab to her interview. At the time, wearing a hijab in that position would have violated Abercrombie’s “Look Policy.” The policy was meant to showcase Abercrombie’s brand, which “exemplifies a classic East Coast collegiate style of clothing,” according to court documents. As a result, Elauf was given a poor score — 1 out of 3 — on the “appearance” section of her interview assessment and was not hired. The Equal Employment Opportunity Commission, a federal agency charged with enforcing employment discrimination laws, sued on Elauf’s behalf. The EEOC argued that Abercrombie had violated discrimination laws by failing to provide Elauf with religious accommodation.

In October, the 10th U.S. Circuit Court of Appeals ruled for the company. Judge Jerome Holmes wrote in his opinion that even though she wore it to her interview, “Ms. Elauf never informed Abercrombie prior to its hiring decision that she wore her headscarf or ‘hijab’ for religious reasons and that she needed an accommodation for that practice.”

So the question now before the Supreme Court is one of information and explication: Is an employer liable only if it received an explicit notice from an applicant or employee about a required religious accommodation? Or is explicit notice unnecessary?

This is not the first time that Abercrombie has found itself in this kind of hot water. It settled a class-action discrimination lawsuit — brought by female, Hispanic, black and Asian applicants and employees — in 2005 for $40 million and agreed to institute policies to promote diversity in its workforce. In 2008, the EEOC sued Abercrombie in a case that is similar to the one before the court now. Abercrombie argued that Halla Banafa’s hijab would “place an undue hardship on its business.” And in 2011, a woman sued Abercrombie-owned Hollister after she was fired from the clothing store for refusing to remove her headscarf. That woman, Umme-Hani Khan, filed an amicus brief in the current case in support of Elauf.

How often does the court hear cases like this one? Before the current term, the Roberts court had heard 119 civil rights cases, according to The Supreme Court Database. This case volume is graphed below. Of those, 56 were decided in a liberal direction and 62 in a conservative direction (one case was not coded). 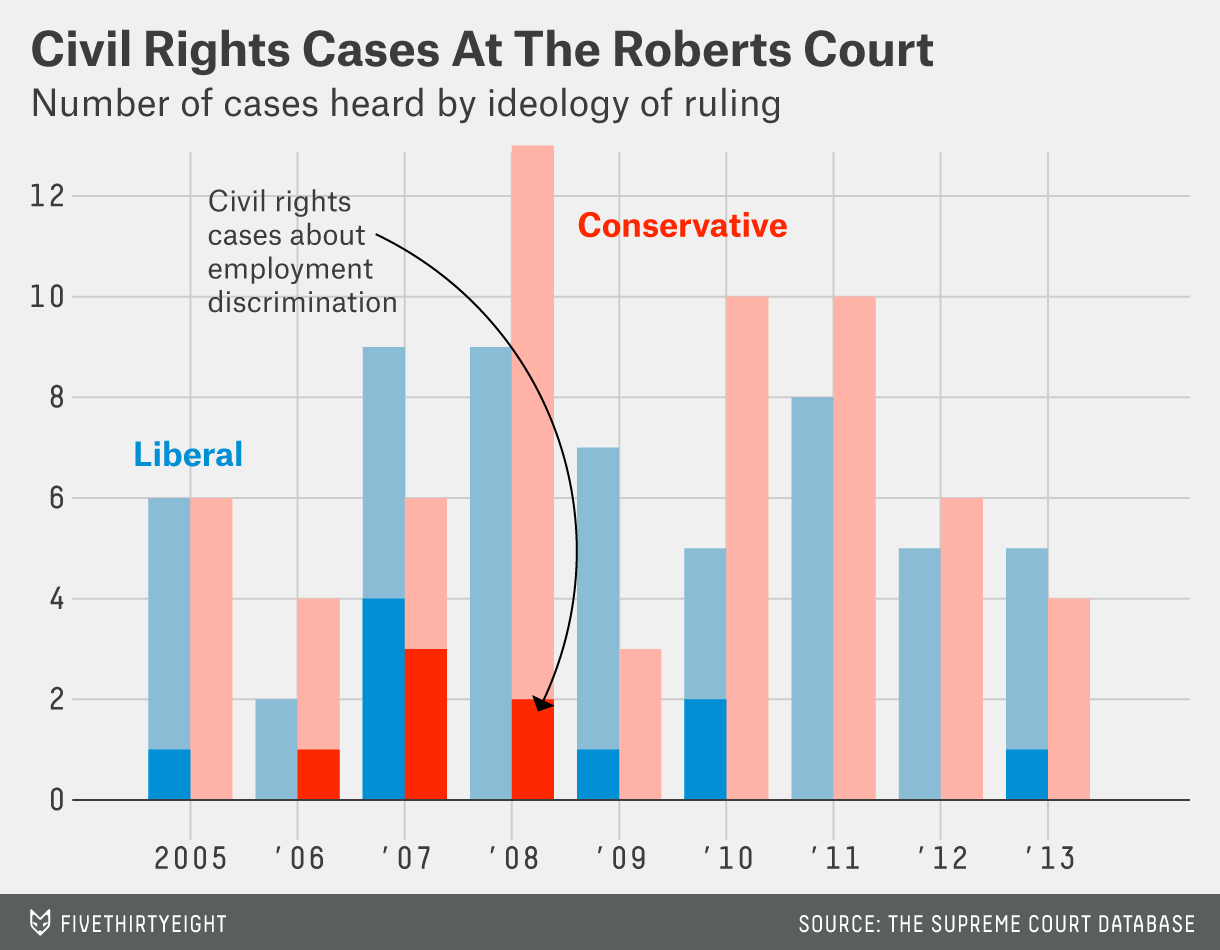 More specifically, the Roberts court had heard just 15 employment discrimination cases. Of those, nine were decided in a liberal direction, and six in a conservative direction. (A liberal decision in this case would be in favor of Elauf.)

As I’ve written before, Supreme Court prediction is a tricky business — but that hasn’t stopped many from trying. And here at FiveThirtyEight, we love predictions, so let’s take a look.

Here I’ll turn to two sources: the {Marshall}+ algorithm — a computer program designed specifically to predict court cases — and the wisdom of the crowd at FantasySCOTUS — fantasy baseball’s even nerdier little brother. This is how likely those predictors view a Supreme Court reversal vote from each justice — a reversal would be a win for the EEOC and Elauf.

The predictions are all over the place, and most are made with little confidence — the likelihood of many justices voting to reverse the 10th Circuit decision hovers near the middle. 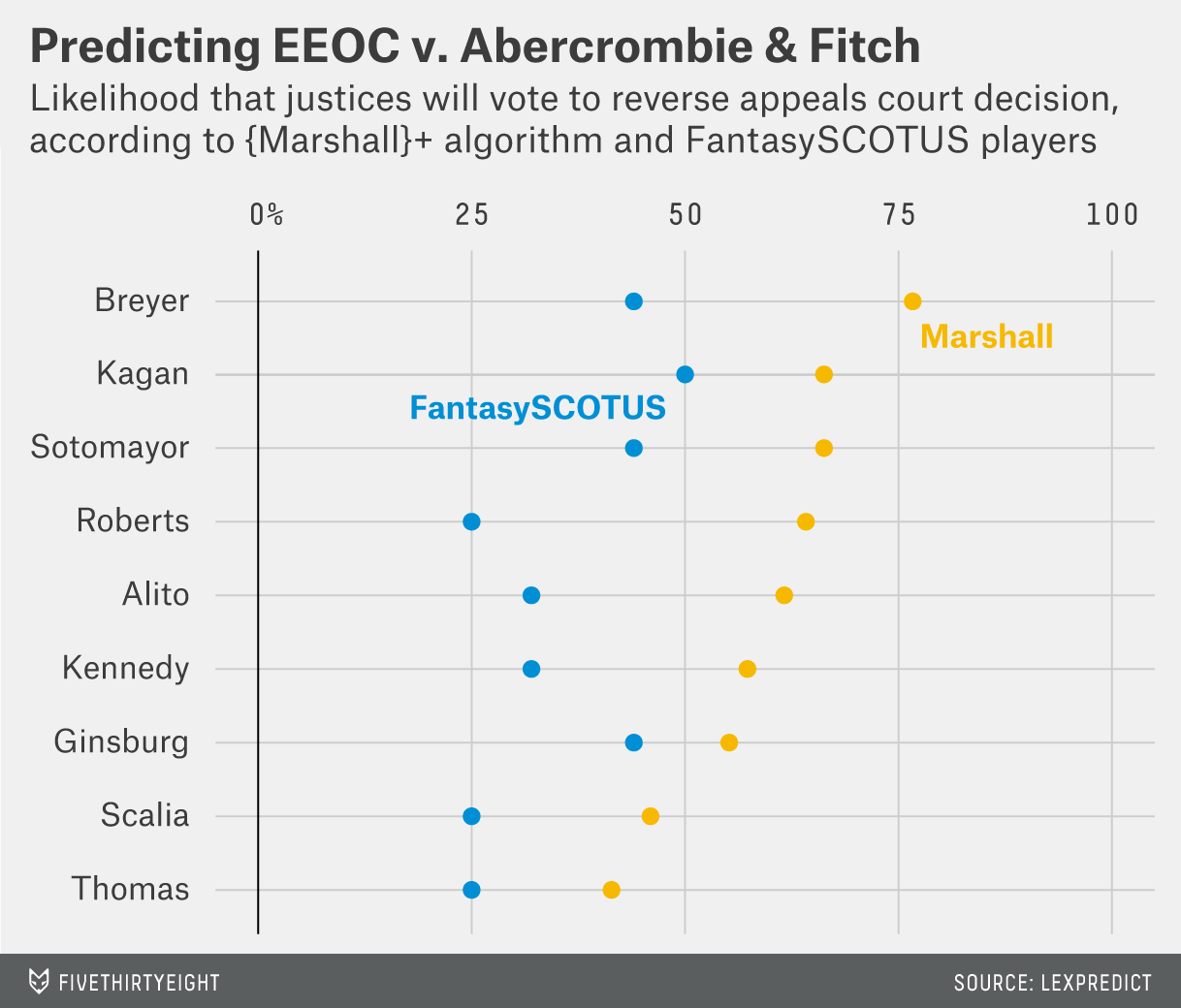 The computer algorithm foresees a 7-2 reversal, with Justices Antonin Scalia and Clarence Thomas dissenting. The crowd predicts the opposite — a 9-0 affirm as of Tuesday morning, but with a few justices more or less on the fence. And not everyone in the crowd agrees. “As it stands now, some of our best players are across the map on this case,” Josh Blackman, FantasySCOTUS’s creator, told me.

The crowd predictions may well improve. Some predictors will pore over the oral argument transcript looking for clues in the justices’ questions. But there’s only one way to find out what’ll happen for sure — wait. The court will likely issue its decision in this case in June.