Holiday travel and the start of a rare Winter semester course have kept me away from commenting on the changes to the Democratic presidential primary rules and calendar, as proposed by the Democratic Change Commission late last month. What follows is the first of two posts on the subject, the second of which will be a published interview with Obama delegate guru and DCC member Jeff Berman I hope to publish tomorrow.

OK, first, the basics: The DCC was created last March by President Obama and his close ally, Democratic National Committee Chairman Tim Kaine. Co-chaired by Missouri Senator Claire McCaskill and South Carolina Congressman Jim Clyburn, the Commission—members of whom are listed here—was tasked with re-examining current party nominating rules and issuing proposed changes. Those proposals are done and now advance to the DNC’s Rules & Bylaws committee, which will review them and make a final, official recommendation to the DNC for its adoption. (I suppose rejection is possible–although the way these things are negotiated, and the way the Commission was assembled, likely precludes an outright rejection of all changes.) 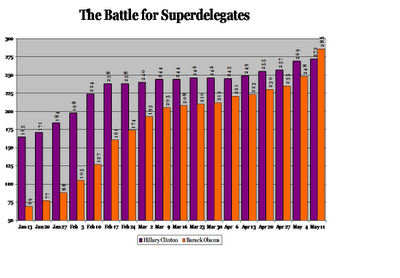 The key recommendation is to eliminate the category of unpledged Party Leaders and Elected Officials–PLEOs, or the so-called “superdelegates”–and replace them with a new category called National Party Leaders and Elected Officials, or NPLEOs, whose votes at the convention would be determined not by their own preferences but by the results of the voting in the primary/caucus of their state. Apparently, there was discussion at some point of turning the current superdelegates into non-voting delegates, but that idea was rejected. “Openness, fairness, and accessibility are central to our ideals as Democrats, and the Commission’s recommendations to reform the delegate selection process will ensure that voters’ voices and preferences are paramount to our process of nominating a Presidential candidate,” said Kaine, in a prepared statement.

Much like the 2000 election reminded the nation that the Electoral College rules do matter, the epic 2008 nomination battle between Barack Obama and Hillary Clinton reminded Democrats and the rest of the country that the nomination rules matter, too. As many of you surely remember, there was a lot of buzz–grumbling among Obama supporters–that somehow Hillary Clinton would win the nomination based on her stronger showing among the 820 superdelegates. And it’s true that, deep into the primary contest she maintained a lead–although, as the chart above depicts, her big early margin among superdelegates began to shrink quickly during Obama’s torrid February streak of primary and caucus wins.

In the end, the superdelegates ratified, not reversed, Obama’s lead among delegates earned in state contests. But there was a period of worry in 2008 that began almost immediately after Obama’s historical Iowa caucus victory on January 3.

So, the next time there is a particularly competitive Democratic primary–and that may be a while, at the very least 2016–what would the proposed changes, if adopted, mean?

In broad, historical terms, the change would continue a process, dating back to the end of the so-called “King Caucus” era in the history of presidential nominations, of shifting control of the nomination process, sometimes gradually and at other times more swiftly, away from party elites and to party rank-and-file voters and caucus-goers. The overall political effect will be to reduce the power of party elites. In terms of nomination campaign calculus, the change will make it more important to actually win primaries and caucuses, because candidates will need to win states or perform well in state contests in order to earn the added votes of the NPLEOs, bound as they will be to their respective state’s outcome.

That will leave a lot of party prima donnas with their noses bent out of shape. The great joy of being a superdelegate in 2008 was having the candidates court you for your support. That meant personal calls from the candidates, invites to campaign events and, in general, a lot of ego-stroking. Many people get in politics got, at least partly, with precisely this motivation. So, that allure will be gone for the new NPLEOs because their vote will be anchored to an election result, not a function of their personal predilections. However, as superdelegates they will presumably retain the coveted hard pass for the convention, along with all the invites to the parties, the goodie bags, and the rest of fun experiences of convention week. The allure of these benefits probably explain the significant pushback against the idea of eliminating superdelegates altogether. 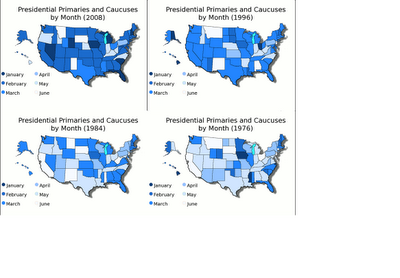 The other major proposed change has to do with the calendar. Specifically, the date before which most of the states not specifically designated by the DNC to conduct their primaries/caucuses early—Iowa, New Hampshire, Nevada and South Carolina last time around—will be pushed back. The obvious effect of this will be to reverse the trend over the past four decades, depicted above, toward both an earlier start date and a condensing of scheduled state primaries/caucuses closer to that start date. It will also have the effect of attempting to provide clear rules that will deter states from trying to do what Florida and Michigan did last time, to the consternation of Democrats in the other 48 states and territories—not to mention, eventually, the Clinton campaign.