In anticipation of the 2020 presidential election, Democrats have announced plans to hold 12 primary debates, with the first scheduled for June 2019 — nearly eight months before the Iowa caucuses on Feb. 3, 2020,1 the first primary contest. This is three more debates than Democrats scheduled in 2016 and is also a much earlier debate lineup than in the 2016 cycle, when the first Democratic debate was held in October 2015.

It’s hard to pinpoint the exact effect primary debates have on an election, but research by University of Missouri communication professors Mitchell McKinney and Benjamin Warner found that nearly 60 percent of study participants experienced a shift in their candidate choices after watching a debate.

William Benoit, a professor of communication studies at the University of Alabama at Birmingham and author of multiple books on debates, told me that while he doesn’t think that primary debates alone can win someone their party’s nomination, they can cost someone a real shot at winning. A major gaffe or lackluster performance may harm a campaign significantly. Still, Benoit said debates can incrementally help candidates, who can use them as platforms to reinforce messages. We can look at the past two presidential cycles for some evidence of how debate performances can either short-circuit or kickstart a campaign.

In the 2012 presidential election, then-Texas Gov. Rick Perry entered the GOP primary race in mid-August 2011 and quickly jumped into the lead ahead of Mitt Romney, the eventual Republican nominee. Then Perry botched an answer regarding a Texas policy for illegal immigrants in a September 2011 primary debate that alienated the GOP base. His numbers plummeted, just in time for him to have his infamous “Oops” moment in a November 2011 debate, when he forgot the third of the three federal agencies he wanted to eliminate as president. Perry did poorly in the early primary contests and then dropped out in January 2012. In the 2016 campaign, then-Wisconsin Gov. Scott Walker entered the Republican field seemingly as one of the front-runners. But Walker made a number of mistakes in his campaign, including an early pair of forgettable debate performances that put his campaign on life support as donors ran away, and he ended his campaign in late September 2015.

Below we’ve plotted Perry’s 2012 GOP primary poll performance using FiveThirtyEight’s database of polls,2 annotating the timing of the key debate events described above. It’s not hard to see how quickly Perry’s polling numbers fell following his debate comments on immigration policy, and how they were already very much in decline by the time he said “Oops.” 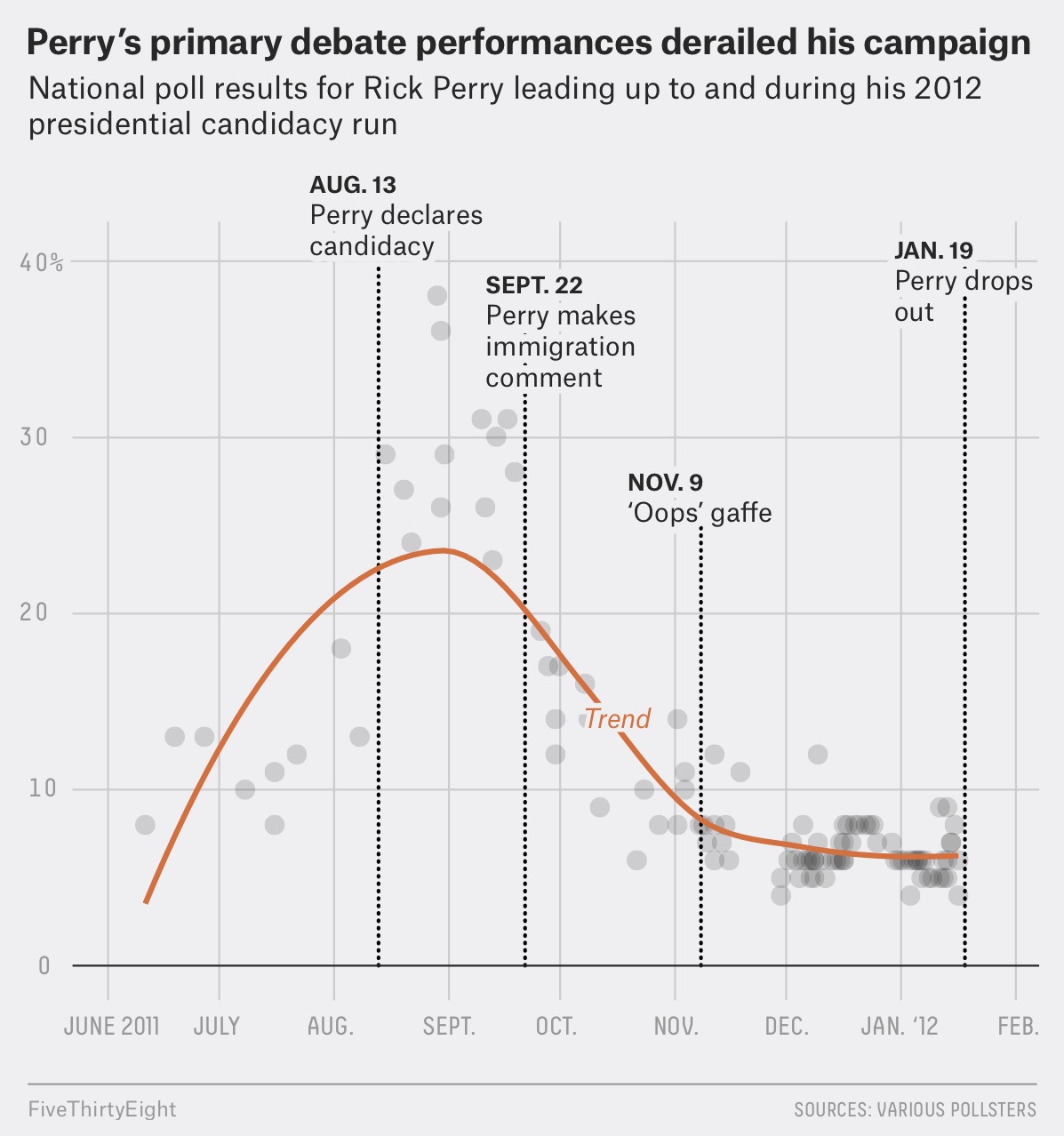 But candidates can also gain traction via primary debates. In the 2016 GOP primary race, former Hewlett-Packard CEO Carly Fiorina started off polling in the low single digits and found herself in the “undercard” debate when the Republican field first gathered in August 2015. But she stood out in the lower-tier gathering and improved her polling numbers sufficiently to make the primetime stage for the second debate. At that September 2015 event, multiple surveys suggested that viewers judged Fiorina as the “winner” of that debate, and her overall numbers shot up in the immediate aftermath. While she faded not long after that surge, the fact that fellow GOP aspirant Ted Cruz selected Fiorina as his vice presidential pick in a last-ditch attempt to improve his chances against Donald Trump speaks to the impact Fiorina had on the campaign. Without her debate performances, that might never have happened.

Below, we’ve plotted Fiorina’s polling data from the 2016 GOP primary using FiveThirtyEight’s polling database and have annotated key events from the debates.3 In contrast to Perry in the 2012 race, we can see Fiorina’s survey numbers improved after her performances in the first and second Republican debate gatherings. 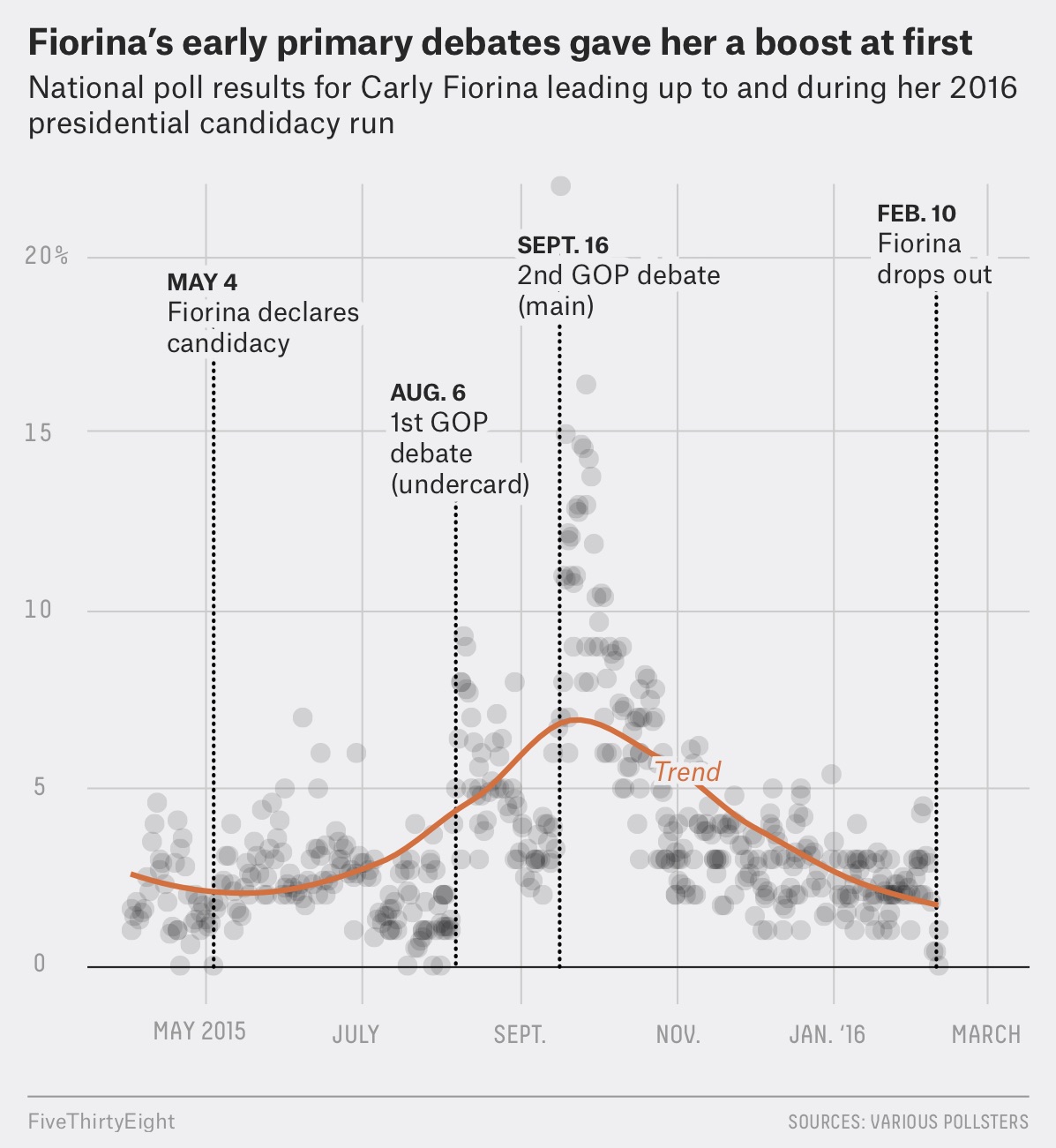 So what are the chances that Democratic presidential aspirants get the chance to use the debates as a means to break through a potentially crowded field in 2020? Benoit pointed out to me that overcrowded debate stages could make it difficult. With the prospect of an even larger field than the GOP had in 2016, Democrats in the 2020 race could find themselves with insufficient time and opportunity to influence voters watching the debates. Democratic leaders seem aware of the problems associated with the two-tiered debate system the GOP and its media partners used in 2016. Chairman Tom Perez said the Democratic National Committee is ready to divide the field and hold debates on back-to-back nights rather than have two debates on the same day, with the participants in each debate randomly selected rather than ranked by their polling stats. This could be a win for lesser-known Democratic candidates — now any candidate who makes the debates will get a primetime slot — and the party can avoid some of the problems the GOP faced in 2016 when it came to deciding which candidates qualified for a spot on each debate stage.

Still, the Democratic field could be so overloaded that debate access will remain a problem despite using a different approach to splitting up debates. The Democratic plan says that candidates will gain access “by meeting criteria that include both polling and other objective measures that reflect a candidate’s support, such as grassroots fundraising.” So disagreements could still arise over the qualifications required to make the debates, especially if the field is quite crowded. Primary debates generally have not had more than 10 participants on the stage at one time, though the GOP did have 11 candidates in its second primetime debate in 2016. But it’s possible the Democrats will have more than 20 candidates seeking the presidency, which would mean that debates on back-to-back nights would probably still be insufficient.

Accompanying these various challenges for Democratic debaters will be the ever-present influence of social media. Many debate viewers will be “dual screening,” watching the debate and their social feeds at the same time. “Humans have a limited cognitive capacity,” Benoit told me. “This means dual-screen voters will pay less attention to the debate than other viewers, and dual screeners will have their perceptions of the debate influenced by social media comments more than other viewers.” Plus, many who don’t watch will get their reactions from social media. One can imagine candidates on a crowded stage trying to deliver zingers that will live on via social media, with the knowledge their mistakes might never go away either.

One way or another, recent history suggests the Democratic primary debates will play an important role in determining who will fail and who will succeed. They could trip up a front-runner or jump-start the campaign of a relative unknown. All the accompanying twists and turns will help influence the preferences of 2020 primary and caucus voters.