This is the inaugural post in our Presidential Geography series, a one-by-one examination of all 50 states and the District of Columbia. In each state, we’ll explore the economic and demographic peculiarities that combine to make one state lean toward President Obama and another go solidly to Mitt Romney. We’ll also highlight a bellwether county in each state to watch for clues on election night as to where the statewide vote will end up. 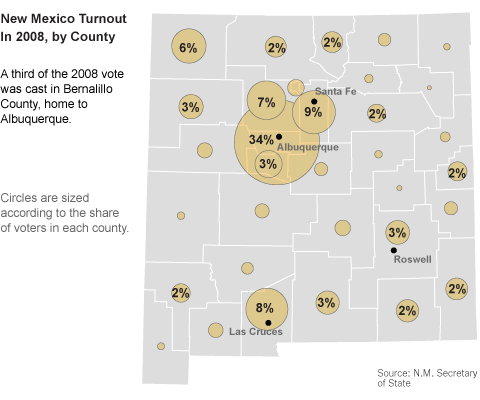 The 2000 presidential election is most remembered for the Florida recount and George W. Bush’s hair-thin margin over Al Gore in the state. But it was actually New Mexico that had the closest contest that year: a 366-vote Gore victory. Four years later, the race in New Mexico was nearly as tight. Mr. Bush managed a 5,988-vote cushion over Senator John Kerry of Massachusetts.

Then came the 2008 race, and the vote in New Mexico wasn’t close to close. President Obama carried the state by 125,590 votes, a 15-percentage point shellacking.

Answer 1: Demographic changes, a growing Hispanic population chief among them, finally hit a tipping point, and Democratic presidential candidates will be able to bank on New Mexico’s five electoral votes in 2012 and for the foreseeable future.

Answer 2: The 2008 election was an anomaly. A Democratic wave nationally — caused by a deeply unpopular Republican in the White House and a financial crisis — as well as a strong get-out-the-vote effort by the Obama campaign combined to inflate the margin in New Mexico. The state will revert to its pre-2008 competitiveness in 2012.

To find the correct answer, FiveThirtyEight spoke with two political science professors from the University of New Mexico: Gabriel R. Sanchez, who is also the director of research for Latino Decisions; and Christine Sierra, who heads up the university’s Southwest Hispanic Research Institute. 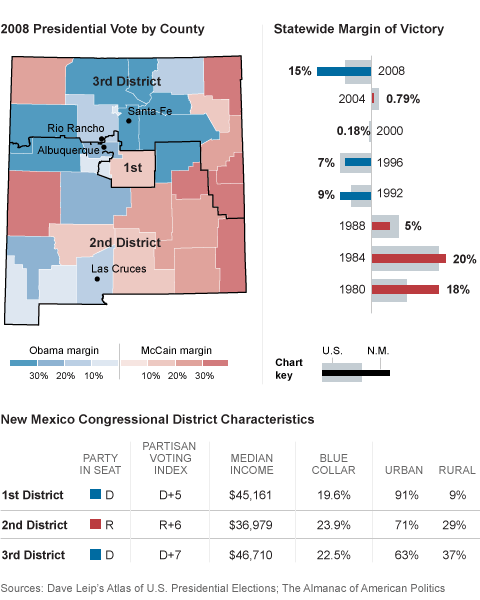 New Mexico has grown more Democratic as its Hispanic population has increased. Hispanics make up 46 percent of the state’s population. Mr. Bush was competitive there partly because he did well among Hispanic voters, winning 44 percent in 2004. In 2008, by contrast, Senator John McCain of Arizona won just 30 percent of the Hispanic vote.

Spanish-speaking enclaves in northern New Mexico trace their heritage back to the Spanish explorers of the 1500s, and many families have been American citizens for generations. As a result, Hispanic turnout tends to be higher in the north than in southwest New Mexico, where recent immigrants from Mexico and Central and South America are more common.

Beyond the growing Latino population, Mr. Obama’s margin in New Mexico was helped by the state’s large American Indian presence, which is 10 percent of New Mexico’s population and which was determinedly courted by the Obama campaign in 2008.

The Third Congressional District is the most Democratic in the state. It includes liberal-leaning Sante Fe and has a higher share of Indians, almost 20 percent, than the state’s other two districts.

New Mexico might be even more Democratic if not for idiosyncratic Albuquerque, the state’s only real metropolis. Albuquerque, in the central part of the state, is less Democratic than big cities in other states. The First Congressional District, which is anchored by Albuquerque, elected a Republican to Congress from its creation in 1969 until 2008.

One reason Albuquerque might be more politically competitive than other big cities, Ms. Sierra said, is that nearly one-fourth of its workers are employed by the government, and many of those jobs are defense-related. Sandia National Laboratories and Kirtland Air Force Base are both in Albuquerque.

The southeast is the one overwhelmingly Republican region of New Mexico. Known as Little Texas, the area — in its culture and landscape — resembles its giant neighbor: it is predominately white, and oil and cattle ranching are two of its principal industries. 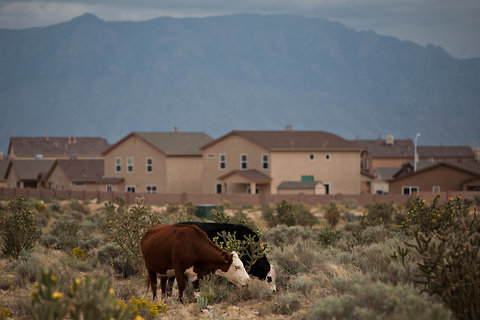 Sandoval County has recently been an almost-perfect barometer of New Mexico’s political mood. In the past three presidential elections, the vote share for both the Democrat and the Republican in Sandoval County hasn’t been more than one percentage point off of the levels statewide.

Sandoval County is home to Rio Rancho, a suburb of Albuquerque that has ballooned into the third largest city in the state. Rio Rancho grew 69 percent from 2000 to 2010. The residents of its subdivisions, like the one above, are a little more conservative than the people of Albuquerque and include employees for Intel, Victoria’s Secret and Sprint PCS, all of which have plants in Rio Rancho.

Mr. Obama is a 92 percent favorite in New Mexico, according to the current FiveThirtyEight forecast. The model projects the president will receive 55 percent to Mr. Romney’s 44 percent, an 11-point margin. That would be a closer race — if not exactly close — compared to 2008.

An 11-point Democratic margin is also probably closer to New Mexico’s default partisan lean than the 15-point victory in 2008. Going back to our two answers at the top of this post, both Mr. Sanchez and Ms. Sierra said that both were incorrect. “The truth likely lies somewhere between the two, but it is too early to tell,” Mr. Sanchez said.

New Mexico might be a swing state in future elections, depending on the national political environment and the candidates. In particular, a Republican candidate would have to have unique appeal to Hispanics to put the state in play (a task that may have been made harder for Mr. Romney by the Obama administration’s decision to limit deportations in certain cases).

But New Mexico is probably no longer a tipping-point state. And if Mr. Obama finds himself in danger of losing in the Land of Enchantment, it’s likely that a large share of the rest of the nation has already become disenchanted with him.