Today we continue our Presidential Geography series, a one-by-one examination of the political peculiarities in all 50 states and the District of Columbia. Today’s stop: New Hampshire, the Granite State.

Every four years, the glare of the nation’s political spotlight fixes on New Hampshire. But the moment is usually brief. For most of the period since World War II, the state’s outsize influence on presidential politics has been limited to the nominating process. During the general election campaign, New Hampshire has been shunted offstage, turned into a background player. 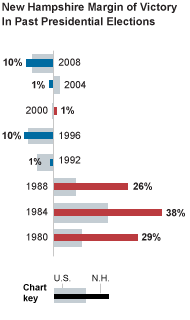 Since then, however, population shifts have helped make New Hampshire one of the nation’s presidential battlegrounds. In 2012, the state — despite carrying just four electoral votes — is among the most important and is a major focus of both campaigns. Mitt Romney began a recent bus tour of America’s small towns in Stratham, N.H., and President Obama is scheduled to visit Strafford County on Monday.

FiveThirtyEight spoke with Andrew Smith, who knows New Hampshire as well as almost anyone. Mr. Smith is the director of the University of New Hampshire’s Survey Center and an associate professor of political science there. 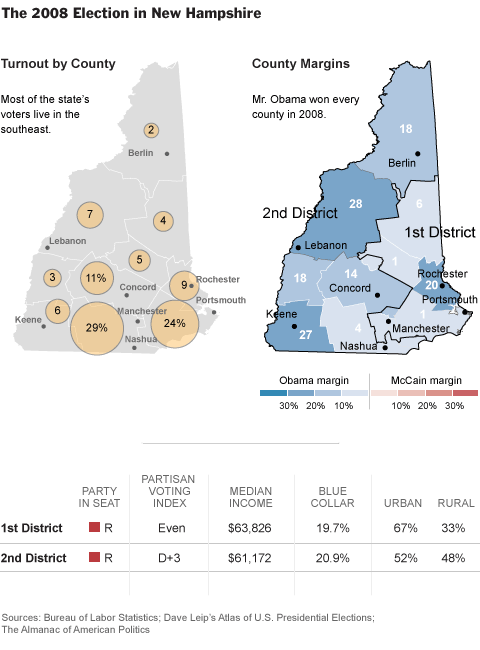 “A third of the potential electorate in 2008 couldn’t vote in the state in 2000, either because they didn’t live in the state or because they weren’t old enough,” Mr. Smith said. The changes have dramatically changed New Hampshire’s political landscape from among the most Republican states in the Northeast to one where Mr. Obama was able to win every county in 2008.

But Mr. Obama is unlikely to do as well this year. The recession has slowed the number of newcomers, arresting the state’s shift to the left. Moreover, Mr. Romney’s brand of Republicanism — fiscally minded but less strident than many Republicans on social issues — resonates with many New Hampshire voters. The state, like many others, swung wholly to the right in 2010, and both parties now have areas of support they can count on. The winner in New Hampshire, Mr. Smith said, is likely to be determined by which campaign can get more of their people to the polls.

The Democratic strongholds in New Hampshire start with the Connecticut River Valley in the southwest, which runs from the Massachusetts border north through Keene to Hanover and Lebanon. It is an area filled with college students and is a popular destination for affluent retirees from New York who have bought second homes in the area’s mountains.

New Hampshire’s coast is also a left-leaning region, with a heavy concentration of Democrats in Portsmouth and Durham, where the University of New Hampshire is located, and in old mill towns like Somersworth, Rollinsford and Rochester.

The heart of the Republicans’ territory lies between the coast and Cheshire and Sullivan counties in the west. Though the cities of Nashua and Manchester vote Democratic, the small towns around them are solidly Republican (Hudson, Windham, Salem, Derry and Pelham, for example). 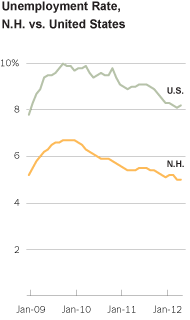 Merrimack County, which is home to New Hampshire’s capital, Concord, has been a close barometer of the Democrats’ statewide strength since 2000, with Democratic support in the county consistently about 2 percentage points stronger than their statewide share of the vote. Concord itself, with its government workers, is solidly Democratic, but the towns surrounding it are Republican, almost balancing out the county.

According to the current FiveThirtyEight forecast, Mr. Obama is a 71 percent favorite to win New Hampshire, just slightly better than his current odds of winning the election over all, 63 percent.

But New Hamphire has an unusually large number of swing voters and may be especially responsive to changes in the national mood. The state is eighth on FiveThirtyEight’s list of top Tipping Point states, ahead of electoral-vote-rich states like Michigan and North Carolina. It is also third on our Return on Investment Index, which measures “the relative likelihood that an individual voter would determine the Electoral College winner.”

There are a fair number of plausible cases under which its four electoral votes might prove to be decisive, securing a second term for Mr. Obama or a first for Mr. Romney.