Today we continue our Presidential Geography series, a one-by-one examination of the economic and demographic peculiarities that drive the politics in all 50 states and the District of Columbia. Today’s stop: Montana, the Treasure State.

In 2012, however, the battle is likely to miss Montana. Both campaigns have largely left the state alone, and most observers expect Mitt Romney to win Montana fairly easily. Even the Obama campaign counted the state as Mr. Romney’s in an electoral map featured in a campaign video.

Still, 20-plus percentage point Republican victories in Montana will probably be harder to come by in the future. The state is undergoing fundamental shifts, in its population, its economy and its politics. FiveThirtyEight spoke with David Parker, an associate professor of political science at Montana State University (he also writes for Big Sky Political Analysis). 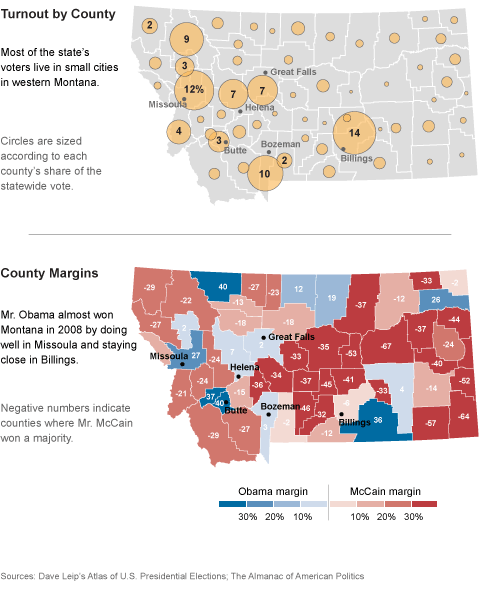 Most of the plains counties in eastern Montana, traditionally the most conservative part of the state, have been losing population for years. During the last several decades, mining and agriculture — top industries in the region — both soured for long stretches of time, causing a slow exodus. In Garfield County, one in five people left during the 1990s.

At the same time, western Montana has seen a large influx of migrants from the West Coast, from more liberal cities like Seattle, San Francisco and Los Angeles. Many outdoor-loving entrepreneurs, untethered from their customers by the spread of high-speed Internet, have relocated to western Montana’s mountainous landscape, helping to make the region’s economy more diverse than the eastern part of the state, and less dependent on resource extraction (although, to the east’s growing resentment, the entire state benefits from the current energy boom).

Most of Montana’s Democratic strongholds are in the west. In 2008, Mr. Obama did well in Butte and Anaconda, old mining towns where the ore is mostly gone but the union ethos remains; Helena, the state capital; and university towns like Missoula and Bozeman. Mr. Obama also won counties in the north and west with Native American reservations.

The flight from eastern Montana and influx into western Montana have combined to make the state more friendly to Democratic politicians, particularly in state-level races. Montana has a Democratic governor, Brian Schweitzer, and two Democratic senators, Max Baucus and Jon Tester. (Mr. Tester is up for re-election in 2012 and being challenged by a Republican who is Montana’s lone representative, Denny Rehberg. The Senate race, which is very close, is receiving the bulk of the political attention in the state.) 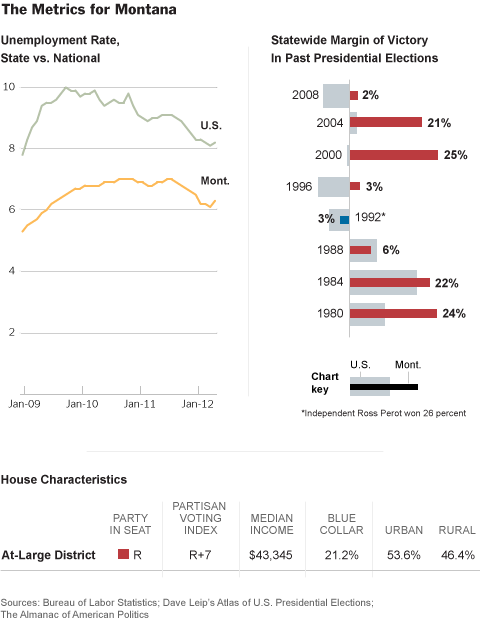 But Montana’s slow shift toward the political center is not guaranteed to continue. For one thing, even as conservative areas have lost population, party loyalty has waned, making voting behavior harder to predict.

Furthermore, hydraulic fracturing — commonly known as fracking — has recently unleashed an oil boom on the Bakken shale field, which extends over northeastern Montana. Bakken oil is a major reason Montana’s unemployment rate has consistently been lower than the national average, as thousands of jobs have been created. The flood of migrants moving to Montana to fill those jobs may alter the state’s political balance, perhaps arresting or even reversing the loss of population on Montana’s eastern plains. But it is still unclear what impact the newcomers might have.

Home to Billings, the state’s largest city at just over 100,000 people, Yellowstone County in 2008 voted for Mr. McCain by a margin of 6 percentage points. That’s almost exactly in line with the state’s Cook Political Report Partisan Voting Index score, R+7. And in the past three presidential elections, the two party vote shares in Yellowstone County have consistently been just 2 or 3 percentage points more Republican than the state.

The FiveThirtyEight model gives Mr. Obama just a 17 percent chance of winning Montana. And even if the nation’s tepid economic recovery suddenly gained steam, it’s not clear Mr. Obama’s prospects in Montana would improve as much as they might in other states. Montana’s economy is already relatively healthy.

But 2012 will probably not be that election.