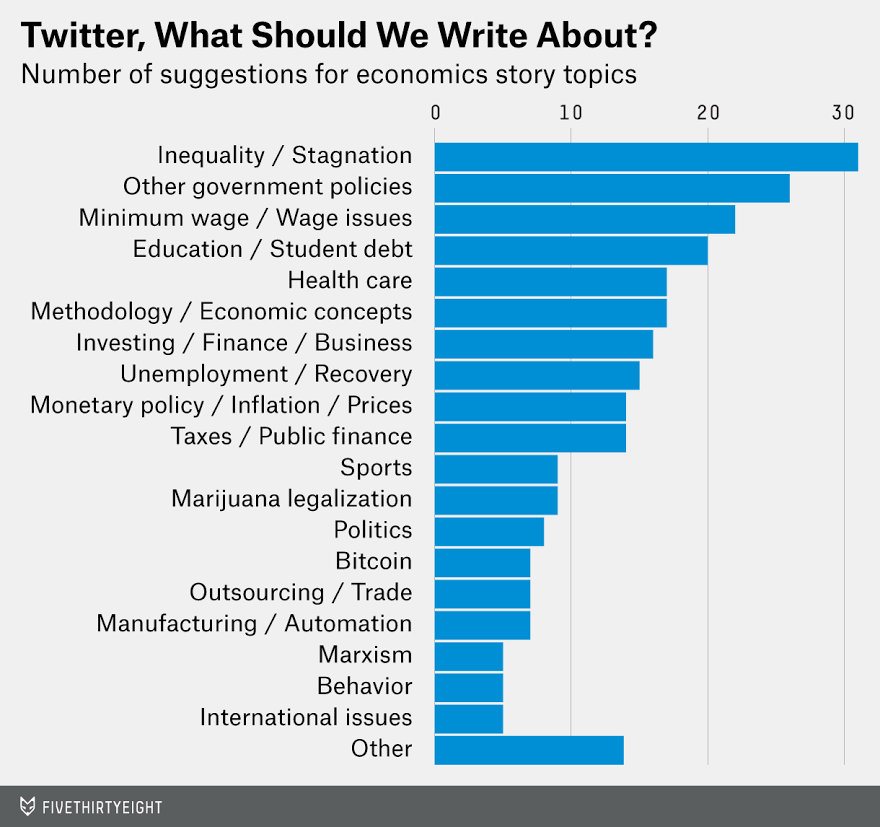 In January, I asked my Twitter followers what economic issues they wanted FiveThirtyEight writers to cover; I repeated the question last week as we were counting down to the site’s launch. The two tweets drew a combined 224 responses from 210 different users. (A retweet from FiveThirtyEight founder Nate Silver to his 670,000-plus followers might have helped boost the number of responses.)

The question drew a remarkable collection of responses, everything from “What are the socioeconomic consequences of decreased reproduction in high socio-economic couples?” (@Rosser2012) to “How is ‘Two Broke Girls’ still on TV?” (@_The_Other_JZ ). But as the chart above illustrates, some subjects drew particular interest.

Inequality was the most popular subject, followed by questions about wages (including the minimum wage). Education and student debt drew a lot of interest, as did health care and other policy questions. And perhaps unsurprisingly given FiveThirtyEight’s focus on data, there were many questions about methodology and data collection.

Good news for readers: We have stories in the works on several of these subjects. A piece on economic data is online now, and one on the minimum wage should land Tuesday. Given the apparent interest in the economics of marijuana legalization, we’ve got a budding idea on that subject, too.

Keep the ideas coming in the comment section below. To inspire you, here are a few of the more original ideas on Twitter (all spelling/punctuation in the original):