1. No, You First. Did the Republicans benefit from having the last convention? It’s not like their convention was responsive, substance-wise, to much of what the Democrats had to say. But, had the Democrats gone last, they would probably have had an easier time undercutting what the Republicans had to say, highlighting the lack of real policy meat (especially on the economy) and the lack of real differentiation from Bush. These things were already the core messages of the Democratic Convention, but had Democrats had the last word, they might have had even more resonance.

Moreover, it would be easier for the Democrats to deflate the Sarah Palin balloon had they gone last. Of course, if the Democrats had gone last, the McCain campaign might never have seen those internal polls that made them panic, and might have made a more conventional VP selection like Tim Pawlenty.

2. My Frenemies? A notable facet of McCain’s speech tonight was that he seemed to be fighting the Xcel Center crowd — and not just the imbecilic Code Pink protestors. The crowd simply wasn’t giving him much love when he wasn’t talking about the three P’s — Palin, Petroleum, and POW. That led to a fairly dreadful stretch of ten or fifteen minutes as he tried to rebut the Democrats on the economy, which in turn reduced the energy level and deprived Mark Salter’s conclusion of some of its thunder. I don’t know anything about the Republicans’ delegate selection process, but it might do them some good to ensure a bit more intraparty ideological diversity. One certainly gets the sense, by the way, that there would have been very tangible risks to McCain in selecting a VP like Joe Lieberman. 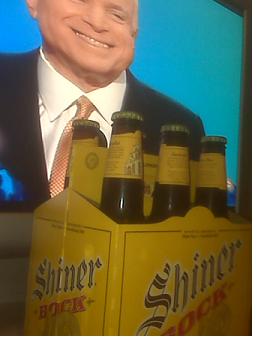 3. In Which I Agree With Larry Kudlow. “In St. Paul … There has been no reference to the populist revolt against high gas prices at the pump,” Kudlow says, and he’s right. As I argued last month, gas prices were the one economic issue on which the Republicans could strike a populist tone while maintaining a straight face, by pushing the issues of offshore drilling and the gas tax suspension. We heard plenty about drilling (though very little about the gas tax) — but the populist framing was gone. Instead, it was drilling for drilling’s sake, annunciated rather vulgarly with the “drill, baby, drill” refrain. That might work well enough for people like — well, Larry Kudlow — but the Republicans probably forsook some ground with Middle America on this issue.

4. Two-for-One? Overall, I think that the Republicans accomplished one major objective with their convention: uniting their base. But the Democrats, I would argue, accomplished two major objectives: uniting their base by bringing home the Hillary supporters, and finally hitting their stride on domestic policy with keep-it-simple-stupid, 1992-style messaging on the economy. It is possible that the Republicans’ one big win will outweigh the Democrats’ two. But they’ve essentially chosen to concede the domestic policy argument — which is exceptionally dangerous because the last major event of the campaign is the October 15 debate at Hofstra University, a debate which is focused entirely on domestic policy.

5. Win, Baby, Win? Did anyone else get the sense that, when McCain said “Let there be no doubt my friends, we’re going to win this election” — he really seemed to believe it? Whatever else Sarah Palin has done, she certainly seems to have boosted McCain’s morale.

6. Schrödinger’s Catharsis. Sometime it’s what isn’t said that is most important — and what McCain didn’t do is to have a cathartic moment in which he called out George W. Bush. For example, imagine a line like:

“Make no mistake, my friends. This Administration was wrong in its response to Hurricane Katrina.”

A simple, relatively innocuous statement like this would have made for an excellent soundbyte (even if it were proceeded by something like “…and I made sure we’d get it right with Hurricane Gustav.”)

Of course, McCain could have upped the difficulty — and the potential payoff — by replacing “Hurricane Katrina” with something like “climate change” or “torture”. But a single line like this would have had a lot of rhetorical force. McCain wasn’t willing to take that risk. As it stands, I don’t really understand the talking point that McCain distanced himself from Bush.