This might be my favorite graph that we’ve done so far: a comparison of Barack Obama’s popular and electoral vote totals across the first 1,000 simulations that we ran last night: 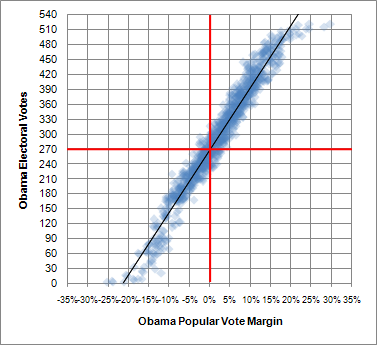 Several interesting things to point out:

2. The regression line crosses the y-intercept at 269.3 electoral votes, which is almost exactly half of 538. That means that there does not appear to be any systematic advantage in the electoral vote math to one candidate or another, at least based on our present rendering of these numbers.

3. Where you do see a little bit of skew are those scenarios where one candidate wins by about 5-15 percentage points. In those cases, the winning candidate tends to win by more electoral votes than is predicted by the regression line. This is because an especially high number of states are within reach for one or another candidate. In contrast to 2004, when 16 states and the District of Columbia were decided by 20 or more points, very few are polling that way this year.