Last month, we examined the most unpopular governors facing re-election in 2014. Many of the governors with the poorest job approval ratings were Republicans in Democratic-leaning and swing states.

But the Republicans also have a group of popular governors in swing states and blue states. With broad bipartisan appeal, those governors — and a few Democratic counterparts — will not only potentially find an easier path to re-election, but could also make strong 2016 presidential prospects.

In the early stages of the 2016 race, top political operatives, fund-raisers and donors may look to home state popularity as a measure of a candidate’s appeal and political talent, particularly for governors in states that don’t automatically and overwhelmingly support a chief executive of one party or the other.

But interestingly, some of the more frequently mentioned governor prospects for 2016, at least so far, have more mediocre job approval ratings.

While our last look at governors’ popularity was limited to candidates eligible to run for re-election in 2014, this time we’ll look at all 50 governors. We collected and averaged, where available, the four most recent job approval polls for each chief executive conducted since the beginning of 2012. The following chart is organized by net job approval, the percentage of residents who approve of a governor minus the percentage that disapprove. 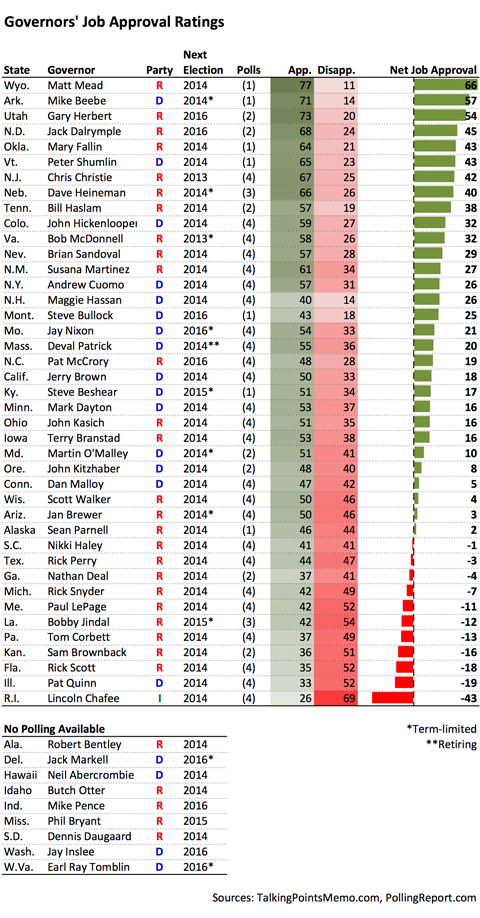 Many of the most popular governors are Republicans in deeply red states, including Gov. Matt Mead in Wyoming, Gov. Gary Herbert in Utah, Gov. Jack Dalrymple in North Dakota and Gov. Mary Fallin in Oklahoma. But a Republican governor’s stellar approval ratings in a solidly Republican state tells us less about that governor’s political talent than the approval ratings of a governor who represents a competitive state, or a state that typically votes for the opposing political party.

At the top of that list is Gov. Chris Christie of New Jersey. A Democrat has carried New Jersey in every presidential election since 1992, yet Mr. Christie, a Republican, has maintained a net job approval above 40 percent. Mr. Christie’s job approval rating increased after Hurricane Sandy and has fallen only slightly since.

After Mr. Christie are Gov. Bob McDonnell of Virginia, Gov. Brian Sandoval of Nevada and Gov. Susana Martinez of New Mexico. All three are Republicans who govern states carried by President Obama in the last two elections. All three are well-liked, with net job approval ratings average around 30 percent.

Among Democrats, only a couple of governors have managed to build support in politically competitive or inhospitable states. About 60 percent of residents in Colorado, which is often near or at the national tipping-point in presidential elections, approve of the job Gov. John Hickenlooper is doing. That may be why the top adviser to Mitt Romney’s presidential campaign, Stuart Stevens, named Mr. Hickenlooper as a possible Democrat who could defeat Hillary Rodham Clinton, should she run, in the Democratic primary in 2016.

The second most popular governor in the nation, Gov. Mike Beebe of Arkansas, has rarely been mentioned as a possible 2016 presidential contender. Mr. Beebe is a very popular Democrat in a solidly conservative state. His crossover appeal — and the recent history in Arkansas of producing a popular Democratic president — might suggest Mr. Beebe, who will be term-limited in 2014, would be among the more talked-about 2016 contenders.

But Mr. Beebe’s name has been mostly absent from early 2016 chatter. One possible reason is that Mr. Beebe will be about two months short of 70 years old on Election Day 2016. While Mrs. Clinton is almost exactly the same age as Mr. Beebe and Vice President Joseph R. Biden Jr. is a few years older, both obviously have much higher profiles, and it’s quite unusual for a politician to gain national recognition in his late 60s.

Meanwhile, some of the most talked-about contenders for 2016 have middling approval ratings.

Only 41 percent of South Carolina residents approve of Gov. Nikki Haley, a Republican; 41 percent disapprove of the job she has done. And Gov. Scott Walker, a Republican in Democratic-leaning Wisconsin, has managed to maintain a net positive job approval rating, but just barely: 50 percent approve to 46 percent disapprove. (Not to mention, Mr. Walker survived a recall effort last June.)

Gov. Bobby Jindal of Louisiana — once a top 2016 prospect for Republicans — has seen the bottom fall out of his approval ratings amid state battles over taxes and budgets. A majority of Louisiana residents, 54 percent, now disapprove of the job he is doing. Only 42 percent approve.

As for the Democrats, Gov. Martin O’Malley of Maryland has been a mainstay of early 2016 polls. But he has only bare majority approval, 51 percent, in deep blue Maryland.