The institution of the Catholic Church is often unpopular with liberals for its position on issues like family planning, but it can also be a force for social progress.

In particular, the first thing I noticed from this Gallup survey on attitudes toward global warming is that the percentage of persons who think global warming is manmade appears to be much higher in predominately Catholic nations than in Protestant ones: 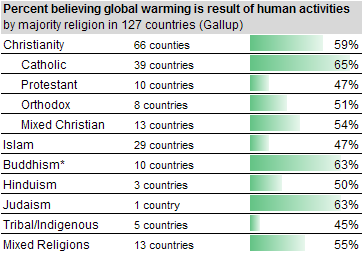 Countries are classified based on their majority religion as according to adherents.com, with an assist from InfoPlease in ambiguous cases. In majority-Catholic nations, on average, 65 percent of adults believe that global warming is manmade, versus 47 percent in Protestant ones (the figure for the United States, which has a Protestant majority, is 49 percent). Countries with an Orthodox majority are somewhere in the middle, as are those where a majority is Christian, but neither Catholic or Protestant theologies predominate. Buddhist countries also seem more inclined toward environmental protection; Islamic ones appear less so.

It can’t be said for certain that religion itself is the cause of these differences, because we haven’t controlled for other sorts of variables. For instance, there is some tendency for Catholic countries to be concentrated in warmer-weather latitudes, where people might naturally have more reason to be concerned about planetary warming. Still, the differences generally seem to hold even within particular regions; in (Catholic) Ireland for instance, 66 percent believe global warming is the result of human activity, versus 48 percent for the (Protestant) United Kingdom.

Poling in the United States, meanwhile, has suggested that Catholics are considerably more concerned about climate change than evangelical Protestants, although not more than mainline or black Protestant denominations, and less so than Jewish or atheist voters.

The Vatican, for its part, has generally been quite sympathetic toward concerns about climate change. Its adherents could be the swing votes in determining whether policies like cap-and-trade move forward, both in the United States and around the world.