The speech by Gov. Rick Perry of Texas to announce his presidential candidacy on Saturday got generally favorable reviews, but it did not take long for some influential Republicans to become overtly skeptical about what Mr. Perry might do for the party in November.

And in perhaps the clearest indication that the Republican establishment wants to hedge its bets against Mr. Perry, there were renewed calls for another heavyweight candidate — like Representative Paul D. Ryan of Wisconsin — to enter the race.

All of this is understandable, particularly if you take a party-centric view of the nomination process. The entire campaign has been about the Republican Party searching for a candidate who is (a) capable of running a strong race against Barack Obama, (b) reliably conservative, and (c) actually interested in running. 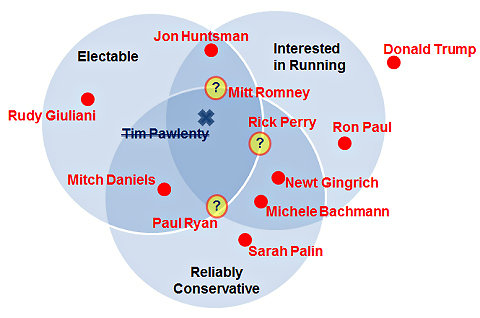 The search has not quite gone as planned. Gov. Mitch Daniels of Indiana seemed to meet the first two criteria, but would not throw his hat into the ring. Mike Huckabee had reasonably strong favorability ratings with general-election voters. But he received little encouragement to run, perhaps because his positions were perceived as being too heterodox on economic policy.

Representative Michele Bachmann and Sarah Palin meet the conservative criterion, but not the electability one. Newt Gingrich was already on tenuous grounds on electability, and when he dared to critique Mr. Ryan’s Medicare plan, he was shunned by the party.

Mitt Romney is still very much in the running — and has adopted essentially down-the-line orthodox Republican positions. But the party looks at his record in Massachusetts and does not seem persuaded that he is a movement conservative at heart.

The candidate who had seemed like the best hope for meeting all three qualifications was Tim Pawlenty. But he was vetoed by the Republican voters.

Enter Mr. Perry. He is running now and with plenty of popular support, already having pulled into the lead in one poll of primary voters.

It is worth watching Mr. Perry’s announcement speech, in which he served up more red meat than an Austin barbeque joint, making a forceful and direct case against Barack Obama. Whereas Mr. Romney calibrates his message to his audience with all the elegance of a station wagon, Mr. Perry gives the impression of bulldozer with just one setting — full speed ahead.

But is Mr. Perry electable?

Let’s be careful about that term. Electability exists along a spectrum, rather than in absolutes. Mr. Romney could defeat Barack Obama under a wider variety of circumstances than, for instance, Christine O’Donnell. But if the United States were suffering from Zimbabwe-style hyperinflation in which all liquid wealth in the country was destroyed every 24 hours, I would start to like Ms. O’Donnell’s chances against Mr. Obama, too.

Now that we have cleared that up: there is not yet a lot of hard evidence about Mr. Perry, in large part because he is not very well known to voters (his name recognition is about 50 percent outside of Texas). Just two firms have polled so far on his favorability rating, and although both found slightly more Americans holding a negative view of Mr. Perry than a positive one, most respondents in the polls had not yet come to a firm view of him.

We could also look at head-to-head polls between Mr. Perry and Mr. Obama. Those do not look particularly good for him: in an average of eight national polls conducted since July 1, Mr. Perry trails Mr. Obama by an average of 11 percentage points.

However, polls for candidates with low national name recognition can be misleading since many voters will not vouch for a candidate with whom they are not yet familiar, instead describing themselves as undecided. It may be marginally more useful to look at the number the incumbent receives, which is less sensitive to these effects. Those numbers are also not great for Mr. Perry: Mr. Obama gets at least 50 percent of the vote in several of the recent polls against him, which means that even if most of the undecideds are really latent votes for Mr. Perry, he would still lose. Another troubling number is the partisan breakdown in the polls: Mr. Obama leads Mr. Perry by an average of 46 percent to 36 percent among independent voters, while trailing 38 percent to 45 percent against Mr. Romney.

Still, given that Mr. Perry is a fresh face to many voters and that head-to-head polls so early in the election cycle have a spotty track record, we are really just guessing about whether this data has much meaning. There is also a broader issue, which is that Mr. Obama’s head-to-head polls have held up fairly well against Republicans given his approval rating — but that question applies to the whole field as much as much as to Mr. Perry. (Mr. Pawlenty, for instance, had similar overall numbers before he exited the race, although he did a tick or two better than Mr. Perry among independents.)

One alternative is to look at Mr. Perry’s performance among voters who do know him — the good folks down in Texas.

Mr. Perry has never lost an election, a rarity even for candidates who go on to become president. Some victories early in his career are impressive: for instance, defeating the incumbent Democratic agriculture commissioner, Jim Hightower, in 1990, a point in time at when Texas still often voted Democratic at the state level. (Mr. Perry was himself a Democrat until 1989.)

Nowadays, however, Republicans in Texas essentially never lose a statewide race, so the fact of Mr. Perry’s re-election alone does not tell us all that much. Instead, we need some kind of a control group.

One choice is simply to look at how other Republicans running for statewide office in Texas fared in the years that Mr. Perry was running. In 2002, for example, when Mr. Perry was elected to his first full term after succeeding George W. Bush, his margin of victory was 18 percentage points. That holds up pretty well against other Republican candidates for statewide office that year (excluding those who did not draw a Democratic challenger), who won by an average of 15 percentage points. 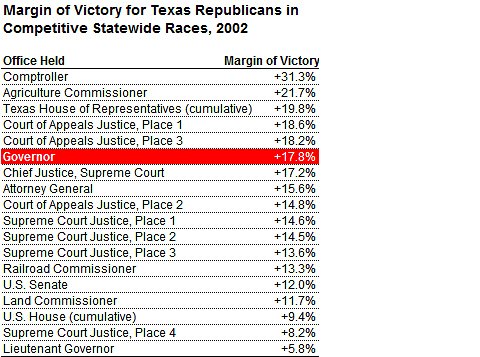 Mr. Perry’s performance in 2006 was much more tenuous: he was re-elected with just 39 percent of the vote in a complicated, four-way race. Even if we ignore that and instead look at Mr. Perry’s nine-point margin of victory over his nearest rival, Chris Bell, a Democrat, it compares unfavroably to other Republicans on the ballot that year, who won by an average of 15 points. (2006 was a very Democratic year nationally, but not so much in Texas.) 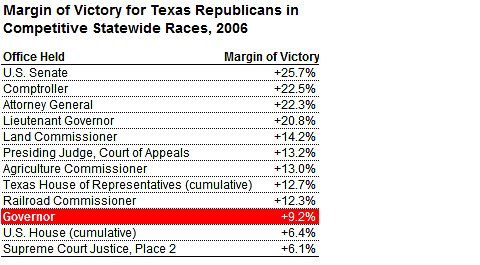 Last year, Mr. Perry was re-elected to another term, defeating Bill White, a Democrat and the former mayor of Houston. But his 13-point margin of victory is underwhelming for such a Republican state in such a Republican year. Other Republicans on the Texas ballot last year won by an average of 27 percentage points instead. 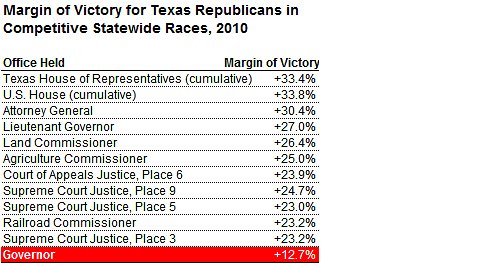 Over all, Mr. Perry has won his three elected terms with an average victory margin of 13 percentage points. That’s certainly not a disaster, but it lags the 19-point margin for other Texas Republicans running in those years. In the most recent two elections, Mr. Perry was losing quite a few voters who were voting for Republican for almost every other office.

I know, it’s not the most overwhelming evidence: every election and every state is different. A more empirically grounded line of research, which we’ll address in a separate piece, is how much a candidate’s ideology affects the presidential race over all.

Still, you have an interesting contrast between Mr. Perry, who won a lot of elections in an exceptionally Republican state, and Mr. Romney, who won just one election in a very blue state. When Mr. Romney was elected governor of Massachusetts in 2002, he was practically the only Republican in the state to have won that year; Democrats took the races for United States Senate, attorney general, secretary of the commonwealth, state treasurer, and state auditor, none being especially close. They won all 10 United States House seats, 33 of the 40 State Senate seats, and a 136-to-24 majority in the Massachusetts House of Representatives.

Most other candidates who have won their party’s nomination have at least one such overachieving performance. Barack Obama won election to the United States Senate in 2004 with an overwhelming 43-point margin, albeit against a very weak opponent. George W. Bush was elected Texas governor by 37 points in 1998. Bill Clinton ran for governor of Arkansas six times, losing once, but winning on three other occasions by at least 25 percentage points. Ronald Reagan defeated Pat Brown, the Democratic incumbent governor of California, by 15-point margin in 1966; although California was not as blue then as it is today, it is fairly rare to defeat an incumbent governor by that margin under any circumstances. Lyndon Johnson won his three Senate terms by an average of 40 points. Results like these are more the hallmark of having a mass-market brand.