Following are our updated pollster ratings, accounting for the Democratic contests in North Carolina, Indiana, West Virgina, Kentucky and Oregon. We’ve also updated to include the final, state-certified voting margin in a couple of states like Ohio where the numbers changed from the unofficial estimates. Apart from refreshing this data, the methodology is entirely identical to Version 3.1. 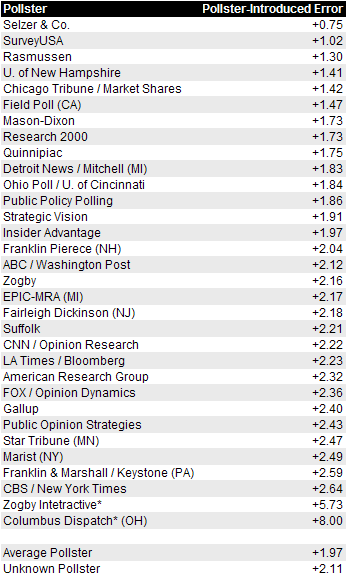 Moving up: Zogby (who did much better than the consensus in Indiana and North Carolina) and Public Policy Polling (who made up for their poor result in Pennsylvania with a spot-on call in Oregon).

Most of the hit appears to have been absorbed by SurveyUSA, which by no means performed badly in this cycle, but had been so far ahead of the curve that even an average performance drags their numbers downward somewhat. The mathematics of the ratings calculation are also such that the ratings tend to be especially sensitive for those pollsters toward the top of the chart.

Even the pollsters who did not poll in this cycle may have seen their ratings affected slightly, as everything is taken relative to the performance of other pollsters. For example, since our opinion of Zogby improved in this version of the ratings, a pollster now gets more credit for beating Zogby in a particular state than it had gotten before.